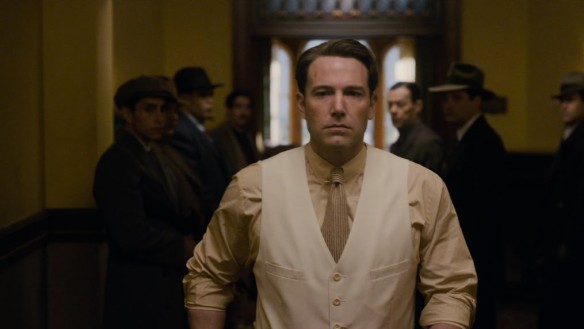 Ben Affleck is all business.

What makes a good man do bad things? Sometimes it’s circumstance, sometimes desperation, sometimes it’s because they believe that they are doing it for a greater good. Once they a good man goes down that path however, how long before it changes him from a good man to a bad one?

Joe Coughlin (Affleck) went to the First World War as a good man. The son of a police captain (Gleeson), he returns home to Boston disillusioned and bitter, vowing not to follow orders ever again. He becomes a petty thief with a small gang but Coughlin is bold and smart and soon comes to the attention of Irish mob boss Albert White (Glenister). Coughlin wants no part of a gang but it’s one of those situations where he doesn’t have any attractive alternatives.

Unfortunately, soon White’s mistress Emma Gould (Miller) comes to Joe’s attention and the two start carrying on a rather dangerous clandestine relationship. Of course, it inevitably leads to tragedy and Joe goes to jail. When he gets out, Boston is essentially closed to him and he goes south to Tampa along with his right hand man Dion Bartolo (Messina) where they will oversee the rum running operation of Italian mob boss Maso Pescatore (Girone). There he meets two pivotal people – police chief Figgis (Cooper) and Graciela (Saldana); the former he forges a business relationship with and the latter a romantic one.

Joe’s interracial romance soon garners the attention of the Ku Klux Klan who makes life a mess for Joe. Joe appeals to Chief Figgis for help but the Klan’s most visible guy (Maher) happens to be the Chief’s brother-in-law. Although he admires and respects the Chief a great deal Joe uses blackmail photos of the Chief’s daughter Loretta (Fanning) to force the Chief to betray his brother-in-law.

Some time after that, Joe hits upon the idea of building casinos in Florida and begins construction on a magnificent one. Pescatore is happy because Joe is making him cartfuls of money and plenty of important people want to see the casino built. However, Joe is opposed by an evangelist – Loretta Figgis – who helps turn public and political opinion against him. Now Joe is in a great deal of hot water and finds himself once again between the two Boston mob bosses except that this time they are BOTH against him. Surviving this battle may not be possible.

Let’s cut to the chase; this is the weakest entry in Affleck’s otherwise stellar directing filmography. That doesn’t mean this is a terrible film, it’s just the most convoluted and least interesting of Affleck’s films to date. Don’t get me wrong; he’s a truly talented director and some of the scenes he has shot here are simply magic, but there aren’t enough of them to make a cohesive whole. Some of the blame lies at the feet of Dennis Lehane whose book this is based upon; the book itself was somewhat plot-heavy and it doesn’t translate to the silver screen as well as other books that the author wrote like Mystic River for example.

There are a ton of characters in here and a pretty high-end cast; that leads to a logjam of performances, some of which get short shrift and others seem to simply disappear in the bedlam. Standing out are Cooper as the bereaved and aggrieved chief of police, Saldana as the patient girlfriend and Messina as the loyal right hand man. All three get substantial screen time; not so much for fine actors like Miller, Gleeson and Greenwood among others.

And with all this, sometimes it feels like you’re riding a lazy Southern river that seems to be all bend and no destination. There are at least three false endings and when the final credits role there is a feeling of relief. The movie could have very easily ended at a much earlier point (I won’t say where but if Ben Affleck wants to e-mail me, I’d be glad to discuss it with him) and have been much more satisfying than the place it finally did end.

I’m hoping this was just a fluke and that on his next film Affleck returns to form. He has shown in his career that he’s a bit streaky, both to the positive and to the negative. He is capable of greatness and he is also capable of movies that are utterly forgettable. This falls in the latter category – it’s not horrible, not really cringe-worthy; just inconsequential. That’s not an adjective you want used in connection with your film and I’m sure Affleck doesn’t want to make films that even potentially could have that adjective used to describe them. I sure don’t like feeling that the adjective is apt.

This is a nice looking movie that captures the era convincingly to my mind. Affleck looks pretty chic in the tailored suits of the era and the ladies have that elegance that the 30s were known for. There is a fair amount of violence – some of it bloody – but you would expect that in a film about gangsters. There is also a moral ambiguity that might be troubling for some. When watching the Corleone family, you got a sense that they knew what they were doing was wrong but this was what they knew how to do. Coughlin seems to have more options and a moral compass but he still chooses to do things that are expedient rather than right. I suppose that’s true for a lot of us.

REASONS TO GO: Affleck remains a gifted director even on his less successful films.
REASONS TO STAY: A meandering plot sabotages the film.
FAMILY VALUES: There is some fairly graphic violence, lots of profanity and a little sexuality
TRIVIAL PURSUIT: This is the second movie based on a Dennis Lehane novel that Affleck has directed (the first was Gone Baby Gone back in 2007).
CRITICAL MASS: As of 2/24/17: Rotten Tomatoes: 34% positive reviews. Metacritic: 49/100.
COMPARISON SHOPPING: The Untouchables
FINAL RATING: 6/10
NEXT: Marathon: The Patriot’s Day Bombing