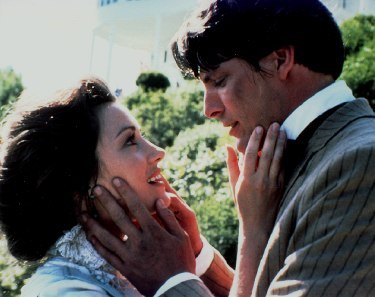 A better looking pair of people we may never ever see again.

Sometimes being with the one you love isn’t an easy task at all. Distance and circumstance can get in the way, as can the disapproval of others. But what if the one you want to be with lived 60 years earlier?

Richard Collier (Reeve) is a budding playwright who is having a play produced at a community college. The future looks bright for this young man – Broadway producers are sniffing around for his work and he’s got his whole life ahead of him. However, at the cast party, something odd happens; an elderly woman (French) walks in, presses an antique pocket watch into his hand and says “Return to me,” then walks out without another word, a strange little half-smile on her face.

Flash forward eight years. Collier’s now a successful playwright living in Chicago but his life is lacking something. He has no girlfriend, no love life and he is having a hard time writing his next play. He decides to take a breather and goes out on a weekend trip – he has no idea where he’s going, he just gets in his car and drives. He eventually winds up on Mackinac Island – a beautiful island in Michigan (note to purists: while cars aren’t allowed on the island, the production team got special permission to use them just this once). He espies the gorgeous, Victorian-era Grand Hotel and something about it calls to him. He pulls into the hotel and checks in.

He is escorted to his room by Arthur (Erwin), a bellman who has been at the hotel since he was five, back in the 1910s. The view is magnificent from his room and the ambience is exactly what the doctor ordered.

Collier goes down to the hotel dining room only to discover they won’t be open for another 45 minutes. He decides to wander around the lobby and discovers the Hall of History, dedicated to preserving artifacts from the hotels storied past. That kind of thing is of interest to Collier so he browses, but he feels something behind him, beckoning. It turns out to be a photograph of a beautiful woman, the nameplate for which has fallen off.

It turns out her name is Elise MacKinnon (Seymour), a renowned turn-of-the-century actress who once appeared in a play in the hotel’s theater. She became something of a recluse in her later years. Collier becomes obsessed with her. He checks out everything in the library that’s ever been written about her, which isn’t much. However, he discovers that she had a local woman as a caretaker, so he decides to visit her. That’s where he discovers that MacKinnon was actually the elderly woman who visited him with the pocket watch, on what would turn out to be the night she died.

He notices a book on time travel in her collection that an old college professor of his wrote. It turns out that if you hypnotize yourself properly, you can actually send yourself back in time where you will stay – so long as you don’t break the “spell” by seeing something anachronistic. So, he buys himself a turn of the century suit, fills his pockets with coin of the era and starts talking to himself. However, it works – he finds himself back in 1912.

He does manage to meet the lustrous MacKinnon who asks him “Are…you…the one?” to which he replies, “Why, yes…yes I am” which is the right answer, even if you aren’t the one. It’s love at first sight which is big trouble to MacKinnon’s Svengali-like manager W.F. Robinson (Plummer). However, despite all Robinson’s best efforts it appears obvious that MacKinnon is destined to be with Richard forever. However, fate has a cruel twist in store.

There are many who consider this one of the best romantic fantasies of all time, if not the best. French director Szwarc directed this from a nifty screenplay by Richard Matheson who adapted it from his own book “Bid Time Return” (Matheson is best known for his “Twilight Zone” scripts, although he is also an accomplished writer who has had several of his books adapted into movies, including Psycho, The Incredible Shrinking Man and I Am Legend). As I mentioned, this is very well-written with a nice twist at the end.

Reeve was then fresh off his Superman: The Movie success and was one of the most sought-after actors in the world, but he did the movie for a considerable discount on what he could have commanded (his agent apparently refused to let him read the script because the producers couldn’t afford to pay him the salary the agent wanted) because he loved the script, which the producers slipped into his hotel room. He comes off a little bit too earnest here, a bit more like Clark Kent than Superman.

Still, his chemistry with Seymour is undeniable. Seymour is absolutely at her best here. She was very much the virginal romantic lead that seemed to be her stock-in-trade back then. She would later go on to “Dr. Quinn, Medicine Woman” which remains her best-known role but at this time, she was still one of Hollywood’s hottest ingénues.

Almost as a third character is the gorgeous Grand Hotel itself. It was then and remains now one of America’s most beautiful hotels, and the movie has only cemented that magic – even today fans of the film flock to the Grand to stay in the place where the movie was made. It is largely unchanged since then, which makes it even more desirable for fans of the movie which are legion.

Which is a bit funny, considering the movie flopped when it was released. Part of that is due to the fact that there was a Screen Actors Guild strike on at the time, preventing the stars from doing any publicity for the film. It also got butchered by reviewers, who called it “overly sweet” and “too serious about itself.” I can see the criticisms, but this is certainly in many ways a Harlequin Romance novel onscreen and while that may have negative connotations to it, is meant to be complimentary here. The movie is not supposed to be anything but the portrayal of an epic romance and of the lengths a man in love will go to in order to be with the object of his affections.

Now if you want to talk about schmaltzy, let’s talk about the score. The late John Barry is perhaps the greatest film score composer ever (some might argue for Max Steiner but I prefer Barry, particularly for epics) but this score missed the mark. He pulls out Rachmaninoff’s Rhapsody on a Theme by Paganini nearly every time the lovers are within earshot of one another. Don’t get me wrong, it’s terrific music but it should have been used more sparingly to preserve its impact.

Nattering aside, the movie remains one of my favorites. I do have a sentimental attachment to it; my late father loved this movie. He was a romantic man, far more than his son – I certainly wish that I had more of that in my personality. Still, I can appreciate a good romantic fantasy – heck, I love a good romance movie too, when it’s done right. For all its faults, it’s a pretty good story and that it reminds me of my dad is icing on the cake.

WHY RENT THIS: A glorious premise and Reeve and Seymour make a magnificent couple. Beautiful Grand Hotel on Mackinac Island in Michigan is a star. Well-written, with a very clever ending.

WHY RENT SOMETHING ELSE: A surprisingly schmaltzy score by John Barry, and a bit too serious about its epic love affair for its own good.

FAMILY VALUES: There are some sexual situations but otherwise pretty mild, even for its day.

TRIVIAL PURSUIT: In scenes with both Plummer and Reeve, Szwarc referred to the former as Mr. Plummer and the latter as Bigfoot because of the confusion of their identical first name. This was also William H. Macy’s first movie (he is credited under the name of W.H. Macy).

NOTABLE DVD EXTRAS: The special edition DVD has a featurette on the film’s very rabid fan club, as well as an excellent hour-long documentary on the making of the movie (I know, there’s one of those on every DVD but this one is a little less of a commercial than most).

TOMORROW: Day 3 of Cinema365: From the Heart