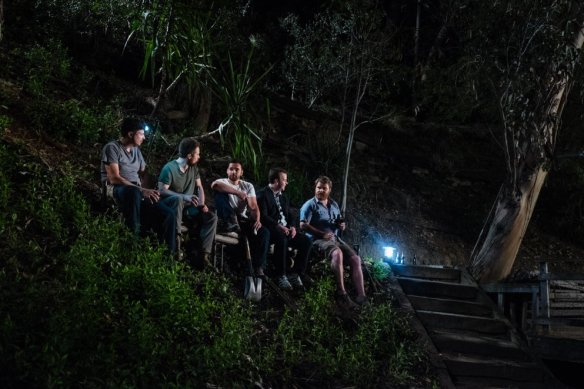 A bunch of bros hanging out.

Tim (Johnson) and Lee (DeWitt) are housesitting for some Hollywood types out shooting on location. They’re treating it like a bit of a vacation since the home they’re watching is up in the Hills and has all the amenities you could possibly imagine. However, as of late, the two have been having problems. Tim has been feeling emasculated and when Lee’s mom (Light) and dad (Elliott) want to foot the bill to send their son Jude (Swanberg) to an exclusive pre-school that they can’t afford, that sensation only gets worse. Of course, if Sam Elliott were my father-in-law, I’d feel emasculated too.

For Lee’s part she’s tired of putting up with Tim’s childish behavior and his lack of inertia. He seems to be stuck in a rut and she’s frustrated – in more ways than one. To put it bluntly, she has been reading a book called The Passionate Marriage and it isn’t about fruit. When one of Lee’s friends (Lynskey) organizes a girl’s night out for her, Lee jumps at the chance, and agrees to take Jude to visit her parents, giving Tim some time to do the taxes which he has been putting off for too long. Tim found a bone and a rusted gun buried in the yard and he’s been obsessing over that.

Of course, Tim decides to chuck the taxes aside and brings a battery of bros over, including the somewhat over-the-top Ray (Rockwell) as well as Billy T. (Messina), Phil (Birbiglia) and Paul (Berg). Much alcohol and recreational substances are ingested, and Ray brings over a couple of girls including Max (Larson), with whom Tim begins to flirt.

When Lee’s friend is forced to cancel, Lee decides to just have a night out on her own. When a drunk obnoxious guy tries to hit on her, she is rescued by bar owner Ben (Bloom) who gets hurt when the drunk gets belligerent. Lee accompanies him home on the back of his motorcycle so she can give him some first aid; it becomes apparent that the two are attracted to one another. Can the two stay true to one another or are things that far gone?

Swanberg, one of the originators of the mumblecore movement, has retained some of the elements of those films here, although I would hesitate to classify it as true mumblecore. Swanberg tends to allow his actors to improvise their dialogue so the conversations sound real. He also has a tendency to examine relationships from a distance, a means I think of giving the audience some perspective which takes a little bit more work than making them feel invested or part of the relationship onscreen. Rather than rooting for Lee and Tim, we’re more observers of Lee and Tim. We’re not invested as to whether they stay together or not and so regardless of which way it goes, we don’t feel like it’s a monumental situation. As in life, there are reasons for them to stay together and reasons for them to drift apart and there really is no way to know which one would be best for them and just like in life, the decision has resonance in both directions.

The cast is extraordinary for a Swanberg film, and there really isn’t a false note in any of the performances. The humor here is bone dry (no pun intended) which is typical for Swanberg and it shows up in unexpected but appropriate places. Swanberg has a deft touch as a director and it really shows here to nice effect.

Some of the movie is a bit disjointed and some of the scenes feel like they were either added on as an afterthought, or were stranded when other scenes were left on the cutting room floor. I would have liked a little bit more flow. The movie’s denouement is on the quiet side and some may find that the payoff isn’t what they wanted.

I must say that I’ve been liking Swanberg’s work more and more with each passing film. He is certainly a rising talent with a lengthy filmography already to his credit (Swanberg regularly churns out two to four movies a year). While it isn’t out of the realm of possibility that he might be behind the camera for a big budget franchise movie someday, I kind of hope he doesn’t. He seems to excel at movies that take a moment in time or a slice of life and let us examine it thoroughly. Through that lens, we end up examining our own lives, particularly who we are, where we are, what we want to be and what we want out of life and love. Heady questions to be sure.

To answer the question, there is no secret to making a relationship work. It takes dedication, focus, hard work and willpower. In other words, it takes the same things to make any sort of worthwhile pursuit work. Which makes sense, when you think about it.

REASONS TO GO: Nifty cast. Dry sense of humor. Nicely captures inner workings of couples.
REASONS TO STAY: A little disjointed in places. Payoff might not be enough for some.
FAMILY VALUES: There are plenty of sexual references, some foul language and brief graphic nudity.
TRIVIAL PURSUIT: Rockwell, Adams and DeWitt all co-starred in this summer’s remake of Poltergeist while Larson and Birbiglia also starred in Amy Schumer’s hit comedy Trainwreck this summer.
CRITICAL MASS: As of 9/1/15: Rotten Tomatoes 65% positive reviews. Metacritic: 69/100.
COMPARISON SHOPPING: :The Big Chill
FINAL RATING: 7/10
NEXT: Air