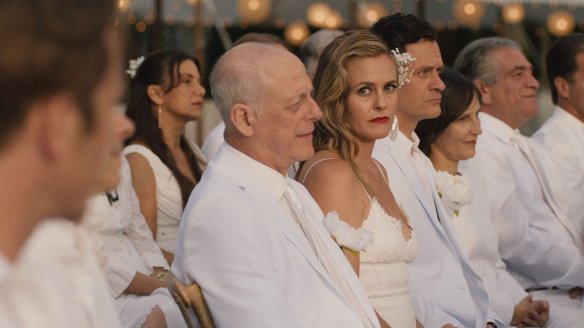 A woman’s side-eye is her most devastating weapon.

Weddings are often joyous occasions, times when families are brought together to celebrate the joining of two lives, two families. They are also occasions for the most boorish and reprehensible behavior imaginable.

Audrey (Silverstone) has reached a crossroads in her life. She is trying to restart her career as an architect, a career she gave up to raise a family. She is turning 40 – this very weekend in fact – and has severe issues with her body, particularly her post-maternal belly which has never returned to the flat, svelte showpiece it once was. Her husband Ethan (Scott) is driving her to the hastily rescheduled wedding of her adored younger brother Liam (Hoffman), taking place at their old family home in the Hamptons, which Liam purchased some years back as his career in finance took off.

Now he is marrying a French wanna-be pop star, Clemence (Olivier) and Audrey immediately gets her hackles up. Clemence is a bit of a diva and tone-deaf at that; she seems to wear the pants in the family, and that is off-putting to Audrey to begin with, but when she discovers that the bride-to-be is pushing Audrey’s brother – who was her best friend growing up – to not merely refurbish the home she loved and had so many memories connected with her late mother but is completely turning it into an abomination and to add insult to injury, they are using Audrey’s ex Isaac (Bewley) as an architect and that to further make things awkward, have invited him to the wedding. Well, let’s just say it’s not the grounds for a strong relationship between sisters-in-law.

Gross references a lot of different touchstones, not the least of which are My Big Fat Greek Wedding and This is 40 in a bid to make a comedy that hits a lot of different demographics. Refreshingly, the wedding is a Jewish one so we miss all the tropes about Christian ceremonies that normally appear in movies like this. Strangely, in avoiding those cultural truisms, director Amy Miller Gross pulls out nearly all the stereotypes about the French – turning the family of the bride into whining, rude Bohemians who are certain they are superior to everybody else.

And perhaps that could have been played for laughs, but instead, Gross (who wrote the script) makes the odd choice of turning Audrey from a sympathetic character into a snarky to the point of flat-out cruelty bitch who takes what sympathy Gross spent the entire first half of the film accumulating for her and tossing it aside until one wonders why on earth anyone would tolerate her for even a moment, let alone the fifteen-plus years of marriage she has enjoyed with Ethan. And to make matters worse, she gets a mad case of mid-life crisis and spends a good part of the second half of the film trying to rekindle a romance with Isaac.

Even so, Gross still had a possibility of pulling it off with Alicia Silverstone in the lead, but it is hard to believe that this is the same actress who made Clueless so delightful, and I’m not just talking about the passage of time. Silverstone resorts to rubber-faced mugging throughout as if she had been convinced she was doing an Ace Ventura movie and it just doesn’t work. I know Silverstone hasn’t been getting a lot of work over the last decade but even so I know she can do better than this.

You can kind of see what Gross was going for and occasionally some things work, like the corrected title cards for each segment, and the use of Clemence’s songwriting partner Orson (Silver) as a kind of Greek chorus. I also like the exploration of why we have a tendency to always want more; as if having a great life and a great family isn’t enough. Maybe that’s part of being human, but we are constantly being bombarded with messages that tell us that we are underachieving and that we need to want more – more money, a better career, a happier family – than what we already have. Contentment has become so passe.

There are some indications that this could have been a much better movie than it turned out to be, so if you’re anything like me you’ll be frustrated by this film, but one can look at it as a learning experience for all involved and hope that their next projects will work out better for them and us.

REASONS TO SEE: There’s a whole lot of neuroses going on.
REASONS TO AVOID: Not as comedic as it could have been.
FAMILY VALUES: There is profanity, some sexuality and nudity, brief drug use and some comic violence.
TRIVIAL PURSUIT: Filmed primarily on location in Amagansett, Long Island.
BEYOND THE THEATERS: Amazon, AppleTV, DirecTV, Fandango Now, Google Play, Microsoft, Redbox, Vudu, YouTube
CRITICAL MASS: As of 12/21/20: Rotten Tomatoes: 25% positive reviews. Metacritic: No score yet.
COMPARISON SHOPPING: My Best Friend’s Wedding
FINAL RATING: 6/10
NEXT: Don’t Click