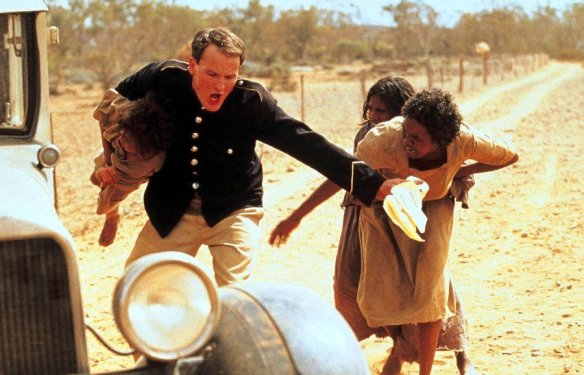 Took the children away.

Some stories are so unbelievable, so outlandish that they can only be true. Rabbit-Proof Fence is, sadly, one of those cases. I say sadly simply because of the hardships endured in this movie by a woman who was blameless of anything but of having a white father and an aboriginal mother.

In the 1930s, Australia had a policy for half-caste children. Led by Minister of Aboriginal Affairs A.O. Neville (Branagh), the idea was to take the children out of their aboriginal homes and train them as domestic or slave labor. There they would join the white culture, marry and have children with white mates, and eventually breed the black out of them, as is graphically illustrated during a scene early in the movie when Neville explains the policy to a women’s group, using slides.

The order goes out to round up the children, and the three young girls are taken from their homes in an emotionally wrenching scene and transported to the Moore River Native Settlement, some 1,500 miles away – roughly the same distance as Minneapolis, Minnesota is from Orlando, Florida. The girls spend some time there, long enough to decide for themselves that what is being done to them is wrong and that their only hope is to escape and walk back home.

Escape they do, chased by a taciturn tracker named Moodoo (David Gulpilil), whose heart may or may not be in his work, and also by the Australian police. The girls’ odyssey becomes a media sensation in Australia; sightings of the runaways keep the story alive, and the vast distance they are covering, with no food, no water and no shelter make survival a real problem.

What’s worse is that the girls don’t really know where their home is. They only know that their home is alongside the great ”Rabbit-Proof Fence” – the longest fence in the world, built to keep rabbits from destroying the crops of the fertile farmland nearby. If they can find the fence, it will lead them home.

The story is simple enough, but powerful. Director Phillip (Dead Calm) Noyce wisely uses powerful cinematography to convey the vastness of the Outback, and the land itself emerges as a character in the film; unforgiving, but bountiful enough when respected. The three children survive their ordeal mainly because of the tutelage of their grandmother, who taught them how to live off the land. The music of Peter Gabriel further enhances the vast expanse.

The three girls who play the main characters are not actresses, although Everlyn Sampi certainly has a future in it if she chooses. They can’t really conceive of how impossible is the task before them; they are just walking home, as naturally as if they were walking 1 mile instead of 1,500. Certainly, they get frightened, they get depressed, their feet ache, but Molly’s strength holds them together. At the end of the journey, when only two of the children reach their destination (one is entrapped by the police), Molly weeps in her grandmother’s arms because she had not brought them all back. It is a powerful moment, one that will affect even the most stone-hearted moviegoer.

The Australians call the children who were taken in this manner The Stolen Generation, and it is not a period in their history of which they are particularly proud. That it lasted until 1970 is mind-boggling. A large percentage of their aboriginal population were affected by these events, and remains so today – singer Archie Roach made a wonderful CD about it, Charcoal Lane, with the powerful ”Took the Children Away” – and it remains a sore subject in Australia today, one which their government has refused to recognize or to apologize for until 2008.

Rabbit-Proof Fence is as a powerful testament to the human side of this issue. It’s hard to imagine anyone seeing this movie and not being deeply affected. Here in North America, our treatment of the aboriginal peoples of the continent has been shameful as well. The experience of seeing this movie got me thinking about my own attitudes not only towards the American Indian culture but also about my attitudes towards other ethnic groups. We are all human beneath the skin and what color that skin is makes no difference any more than the color of the wrapping paper makes any difference towards the gift inside. Rabbit-Proof Fence celebrates this. It’s a movie everyone should see.

WHY RENT THIS: Powerful issue that is a celebration of life. Terrific performance by Everlyn Sampi. Moving and wrenching.

WHY RENT SOMETHING ELSE: Might be too wrenching for those who have lost children.

FAMILY MATTERS: The themes of the movie bring out some very intense emotions; may be too intense for children and those who are sensitive to the taking of children from their parents.

TRIVIAL PURSUITS: The premiere of the film was held in an outdoor venue in Jigalong where the descendents of the children still live. The real Molly Craig appears in the last shot of the film although her health was so frail that the decision was made to shoot that scene first.

NOTABLE HOME VIDEO FEATURES: The Making-Of feature is far from standard, giving a look at the history behind the events of the film. The commentary track similarly veers from typical fashion, including author Doris Pilkington, daughter of the real Molly Craig and whose book the film is based on. Her recounting of her own experiences and those her mother shared with her are heartbreaking.

BOX OFFICE PERFORMANCE: $16.2M on a $6M production budget; the movie was a modest hit.

COMPARISON SHOPPING: The Way Back