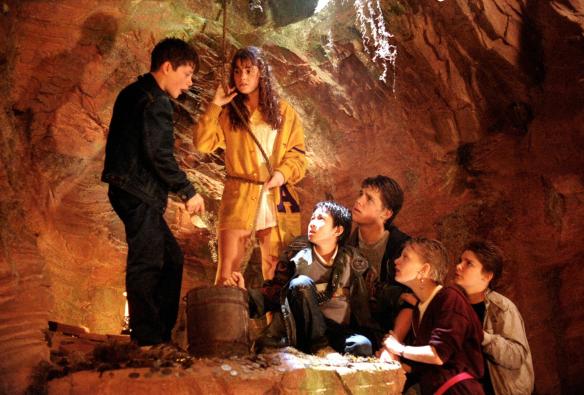 The Goonies ARE good enough!

Some movies capture a moment in our lives, one in which we were essentially happy or later convinced that we were. Perhaps we were children at the time, or just starting out as adults with our whole lives ahead of us. I was 25 when The Goonies came out. My father was still alive. I was single but at least I was (kinda) dating. I was working at my dream job as a rock and movie critic for a weekly paper. Life was good.

Life was good for a group of kids who called themselves the Goonies as well, but then it turned not-so-good. Greedy developers wanted to put in a high end golf course and housing development where their homes were. Most of their parents were struggling to get through but now their struggles appeared to be over and the battle was lost. Despite their best efforts they were all going to have to move and after this weekend they’d never be together again.

Mikey Walsh (Astin) is an asthmatic kid with big dreams. The rainy weather of Astoria, Oregon (where they live and where the movie was shot) doesn’t do a kid with his lungs too much good. His big brother Brand (Brolin) is tasked with watching over him while his mom (Trainor) takes the maid (Ontiveros) out to get some things they need to clean up the house before they leave.

In the meantime they are joined by Mikey’s friends Chunk (Cohen), an overweight klutz with a big ol’ heart, Data (Quan) who yearns to be the next James Bond and is constantly inventing new gadgets to make that come true and Mouth (Feldman) who talks a whole lot but only once in awhile has something to say.

Brand on the other hand has it bad for Andy (Green), a comely young cheerleader whose acerbic best friend Stef (Plimpton) keeps her head from getting too big; besides that she genuinely likes the people hovering around Andy with the exception of Troy (Antin), the son of the developer who is putting the Goonies out of their homes.

While looking about the attic where Mikey’s dad, the director for the tiny local museum has been storing some of the town’s artifacts, the klutzy Chunk knocks over a painting to which the glass shatters. Inside the painting there turns out to be a map. The map appeared to be the work of local legend One-Eyed Willie, a pirate who sailed the waters of the Pacific centuries ago and disappeared with whispers of a vast treasure hidden in the area – a treasure that’s never been found.

Mikey realizes this could be their ticket; their means of saving their homes. Of course, there’s another legend – that of Chester Copperpot, a treasure hunter who disappeared while looking for One-Eyed Willie’s treasure. Despite Brand’s strict orders to that he needs to stay inside, Mikey and his friends ambush Brand and tie him up, let out the air of his bike’s tires and pedal off madly for one last great adventure.

In the meantime, Jake Fratelli (Davi) has been broken out of jail by his mean ol’ Ma (Ramsey) and brother Francis (Pantolliano). They’ve holed up in an abandoned restaurant which as it turns out is where the entrance to the caves where One-Eyed Willie’s treasure is buried. They manage to elude the not too bright crime gang but there is a wild car – the brutish Sloth (Matuszak) whom they keep chained up. Now the Fratellis are hot on the trail of the Goonies with the treasure – and their very homes – at stake. Are the Goonies good enough to take the challenge?

This is perhaps one of the classic movies of the 80s. It’s got Cyndi Lauper on the soundtrack. It’s got Steven Spielberg producing it. It’s got references that put it square in that remarkable decade. It’s got young actors, most of whom went on to bigger and better things in later years. And those young actors do an amazing job. You never forget for a moment that you’re in a group of friends, the same kind you had at their age. The kids you biked all over the neighborhood with. The kids you played videogames with on rainy afternoons. The kids you shared all your deepest secrets with.

Of course, a lot of kids in their 20s and younger reading this won’t have a clue what I’m talking about. Growing up was a whole lot different back then than it is now. You had a lot more face time with your friends who ALL lived in the neighborhood. You saw them in school, you hung out with them afterwards. That’s just the way it was.

The movie is perfectly cast and is fun from beginning to end. The caves of One-Eyed Willie are packed with fiendishly evil and clever traps. The pirate ship Inferno, the vessel of One-Eyed Willie, is magnificent in detail (the filmmakers actually built a working vessel; when you see it sailing near the end of the film, it actually is sailing.

This is perfect family entertainment; it’s got a little bit of everything and it’s never overbearing. Although Donner directed it, there are definite Spielbergian touches throughout and you never for an instance think that it’s anything but a Spielberg film. However, there are definitely things that are of Donner’s devising as well. It’s a theme park attraction waiting to happen (who wouldn’t want to ride a waterslide into a lagoon with a pirate ship floating at anchor?) and a great ride of a movie. If you haven’t seen it, what are you waiting for? And if you have kids, get them off their cell phones and iPads and into the living room for a family movie night. It’s something your whole family will remember for a very long time to come.

WHY RENT THIS: A classic adventure and family movie. Delightful and clever.

FAMILY VALUES:  There are a few mildly bad words, some rude humor, a bit of violence and peril and a couple of disturbing images.

TRIVIAL PURSUIT: When Jake Fratelli sings to Sloth an excerpt from Madame Butterfly, that’s really actor Robert Davi singing; he is a trained opera singer as well as an actor.

NOTABLE HOME VIDEO EXTRAS: The Special Edition DVD includes music videos of both of Cyndi Lauper’s hit songs from the movie, outtakes and a video commentary track that periodically reduces the movie to a window in the corner; the commentators are Donner and all seven of the now-grown Goonies. The Blu-Ray edition has all of these plus a reprint of the official movie magazine from 1985, ten storyboard cards, a reprint of an Empire magazine article on the movie and a board game. That’s right, you heard me correctly – a board game. I’m gonna run right out and get this sucka for Christmas.

BOX OFFICE PERFORMANCE: $61.4M on an unreported production budget; these are only the domestic box office numbers. The movie was a huge hit in its day and continues to generate income through home video, television and occasional theatrical showings.

NEXT: Things We Lost in the Fire