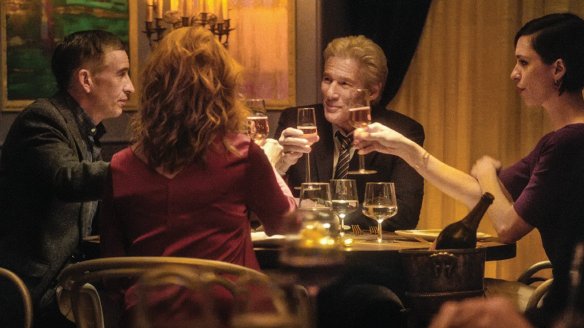 There’s nothing like a lovely, relaxing dinner with friends or family, particularly in a fine dining establishment. Great food, pleasant conversation, maybe a couple of glasses of a really nice wine…all the ingredients for a truly memorable evening. What could go wrong?

Paul Lohman (Coogan) is pretty sure not only that something could go wrong but that it inevitably will. A former history teacher, he’s working on a book on the Battle of Gettysburg, a historical event that carries much resonance for him. He’s always lived in the shadow of his older brother Stan (Gere), the golden boy who became a golden man. A United States Congressman, he’s mounting a campaign for governor with some considerable success. Stan is also working the phones to get a Mental Health bill through Congress.

Paul and his wife Claire (Linney), a lung cancer survivor, is gathering with Stan and his trophy wife Katelyn (Hall), Stan’s second wife, at one of those hoity toity restaurants where food is made to look like art and an obsequious waiter (Chernus) announces what’s in the dish beforehand. The conversation is pleasant enough if not congenial; there is clearly tension between Paul and Stan. But even with the constant interruptions of Stan’s assistant Kamryn (Almonte) there is business between them.

It has to do with Paul’s son Michael (Plummer) and Stan’s son Rick (Davey-Fitzpatrick). The two are, unlike their dads, the best of friends and one recent night the two got drunk and stranded at a party. They went looking for an ATM to get cab fare and instead found a homeless woman (Day). What happened next would be shocking and horrible and could not only ruin the lives of these young boys but that of their parents as well and as the meal goes on and secrets get revealed, we discover the fragility of Paul’s mental state and Claire’s health and the truth behind Stan’s first wife Barbara (Sevigny).

The film is based on a 2009 bestseller by Dutch author Herman Koch, only transplanted from Amsterdam to an unnamed American city in the north. Koch was apparently extremely disappointed in this version of his novel (it is the third film based on it) and walked out of the premiere and declined to attend the afterparty. I can’t say as I blame him.

I have to admit that I was disappointed with this film. It had everything it needed to be an artistic success; a compelling story, a terrific cast and a respected director, among other things. Unfortunately, Moverman chose to overload the film with flashbacks which disrupt the flow of the story and frankly become irritating – as an audience member, I wanted to see more of the dinner itself. However the extremely volatile situation leads to much storming away from the table in a fit of pique. This is the most childish set of adults (with the exception of Stan) that you’re likely to meet. In fact, one of the things I disliked about the film is that none of the main characters has anything resembling redeeming qualities. They are all so unlikable that I don’t think you could get through a meal with any one of them, let alone all four.

It’s a shame because it wastes four strong performances.  Linney in particular does some stellar work as the self-delusional wife who refuses to believe, despite all evidence to the contrary, that her little angel is a sociopath. Coogan, better known for comedic roles such as The Trip makes for a fine dramatic actor here and rather than playing a mentally ill man for laughs, he makes the role less rote. There is pathos yes and an element of humor but it is a realistic portrayal of a man whose demons are slowly winning the war inside him. Gere and Hall distinguish themselves as well.

The movie feels pretentious at times. There’s an extended sequence where Paul and Stan visit the Gettysburg Battlefield. It is a good looking sequence, shot through filters and utilizing collages and Stephen Lang narration of the various stops on the driving tour but at the end it feels almost like an addendum, not really part of the movie and certainly not needing that length. I get that Paul feels that Gettysburg is an analogy for his own life but it seems to be hitting us over the head with a hammer.

This is a movie I would have loved to at least like but ended up not even able to admire. Moverman would have been better off spending more time at the dinner table than away from it; certainly some context was needed and I’m sure he wanted to stay away from making the movie feel stagey but at the end of the day it ended up shredding the movie like it had been through a cheese grater. This is a bit of a hot mess that can well take a back seat to other movies on your must-see list.

REASONS TO GO: The film is organized by course which is nifty. Good performances by the four leads.
REASONS TO STAY: None of the characters have much in the way of redeeming qualities. The overall tone is pretentious and elitist.
FAMILY VALUES: There is some disturbing content of violence and cruelty, adult themes and a fair amount of profanity.
TRIVIAL PURSUIT: This is the third onscreen collaboration between Gere and Linney; Primal Fear and The Mothman Prophecies are the other two.
CRITICAL MASS: As of 5/5/17: Rotten Tomatoes: 48% positive reviews. Metacritic: 59/100.
COMPARISON SHOPPING: Carnage
FINAL RATING: 5/10
NEXT: Colossal