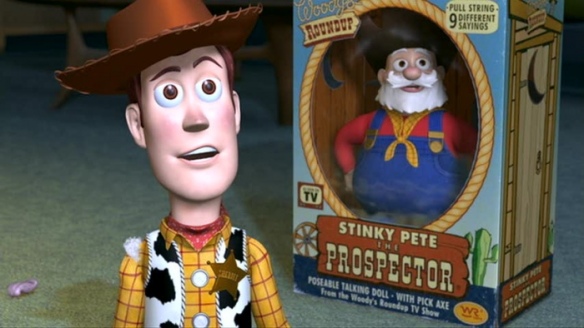 Mesmerized by the boob tube.

It’s not often that a sequel turns out to be better than the original, but Pixar’s computer-animated Toy Story 2 definitely fits into the exception category.

Woody (Hanks), Buzz Lightyear (Allen) and all the gang are back with a few charming new additions. Woody is kidnapped by a dastardly toy collector (Knight) to complete a group of “collectables” (remember when they were just plain ol’ toys for playing with?) that he intends to sell to a Japanese toy museum. His pals, of course, take a little trip out into the world beyond Andy’s room, once again, to rescue their friend.

Except that Woody isn’t sure he wants to be rescued. See, he’s discovered that he used to be a BIG star – his own television show and a pretty impressive array of merchandising (remember when we used to call it toys?) – Yo-yos, lunchboxes and, of course, the precursors to action figures, or what used to be called “dolls.”

The other three figures in the set – Stinky Pete the prospector (Grammer), the hyperactive bronco-bustin’ cowgirl Jesse (Cusack) and the faithful steed Bullseye – have been languishing in storage waiting for their set to be completed. They are initially chagrined that Woody wants to return to his owner. A particularly poignant song, “When She Loved Me,” illustrates the lot of toys (and makes me wish I’d treated my own better) and leads into an examination of the nature of love, disguised as the relationship between kids and their toys. It is thought-provoking scenes and songs such as this that elevate this film above the average kid movie.

Eventually, Woody chooses to go back to Andy but to get there he must surmount the Evil Emperor Zurg (don’t ask), another Buzz (again, don’t ask) and a traitor amongst his friends (gasp!). Woody’s sentiment – “I know he’ll grow up,” says Woody in a moment that really defines the movie, “and I want to be there for every minute of it” – turns out to be a metaphor for parenting in general. Who knew?

There are a lot of great gags that will be appreciated by kids of all ages. Kids will dig seeing their heroes in action again, and parents won’t be bored with much of the action taking place at a level that reaches the young and old alike. Da Queen and I took our then ten-year-old son with us to the theater back in the day and I’m pretty sure we enjoyed it at least as much as he did, if not more.

Toy Story 2 requires a few leaps of faith in its own internal logic, and there are a few in-jokes that may sail over the heads of the terminally unhip, but beyond that it’s nearly perfect entertainment for the entire family. Unlike some of the other big kidflicks from roughly the same era, parents can actually enjoy this together with their kids, instead of having to go in knowing they’ll be subjected to ultra-violence, dumbed down to the lowest common denominator and made with the express purpose of making money off of spoiled kids and their parents determined to demonstrate their love by how much they spend. Ain’t that a poke in the eye?

Here is a win-win situation for families who want to head to share a movie night as a unit. Heck, you’ll enjoy it even if you don’t have kids.

WHY RENT THIS: Something both kids and parents alike will love. Sophisticated, layered story that respects kids. Chances are you’ll want to own this one, especially if there are kids in the house.

WHY RENT SOMETHING ELSE: A few minor lapses in the movie’s internal logic.

FAMILY MATTERS: A couple of scenes of toy peril but otherwise suitable for the entire family.

TRIVIAL PURSUITS: The address of Al’s Toy Barn in the movie is the same as Pixar’s animation studio at the time in Richmond, California.

NOTABLE HOME VIDEO FEATURES: The 3-Disc Ultimate Toy Box edition from 2000 that combined both Toy Story films at the time includes the outtakes shown at the end of the movie and the classic Pixar short Luxo, Jr. The 2-Disc Special Edition includes these as well as an introduction by co-director and Pixar chief Lasseter, an excerpt from the Japanese game show Ponkickies involving Woody, a music medley, some interviews from the film’s 1999 release and a couple of games. The Blu-Ray edition includes all of this as well as some features on Pixar and the late Joe Ranft, a preview of Toy Story 3 and a look at Buzz Lightyear on the International Space Station.

NEXT: The Truth About Romance

Pixar has become a brand name in the same way Lexus and Rolex are. It has become a symbol of prestige, the very best in their industry. Of course, no human institution can operate at peak ability every time out.

Lightning McQueen (Wilson) makes a triumphant return home after winning his fourth Piston Cup, marking him as one of the all-time NASCAR greats. He is happy to hang out with his best friend Tow Mater (Larry the Cable Guy) and his girlfriend Sally (Hunt) when he receives word that a former oil billionaire gone alternative fuel-happy, Sir Miles Axelrod (Izzard) is putting together a World Grand Prix, a series of three races around the world (two of them in Europe, one in Asia – none in North America which seemed to be bending a bit backwards not to make this one as overly American as the first Cars) showcasing his new alternative fuel Alinol.

Lightning is a bit reluctant to go but after smug, arrogant Formula 1 racer Francesco Bernoulli (Turturro) – a clever reference to the principle of fluid dynamics which is part of what makes the modern automobile engine work – insults Lightning, its game on.

In the meantime, British spy Finn McMissile (Caine) discovers a plot led by the renegade scientist Professor Zundapp (Kretschmann) to ignite the Alinol fuel with a burst of microwaves, leading the public to believe that the fuel is unsafe and forcing them to buy their crude oil – the professor and his group happen to own the world’s largest fuel reserve.

The overall leader of the plot is unknown but an American agent has a photo of him. Finn and his compatriot, inexperienced tech agent Holly Shiftwell (Mortimer) are supposed to pick up the film at the party for the World Grand Prix, but the agent is spotted and in desperation, attaches the film to Mater, who has been embarrassing Lightning with his ignorant antics. Mistaking Mater for the spy, Finn and Holly team up with Mater who must discover who’s behind the plot (which turn out to be a consortium of lemons, cars like Pacers, Yugos and Gremlins, all of which have been written off as bad cars), a mission that becomes more urgent when it is revealed that Lightning is the next target for destruction.

By now, most people are well-aware that this may well be the weakest movie in the Pixar filmography. In terms of storyline, this is certainly true – the plot is quite a bit of fluff, disposable and not particularly original. When compared to such work as Up, Wall-E and Toy Story, it certainly doesn’t hold up well.

However from an entertainment point of view, it isn’t a bad choice for a summer afternoon. The movie has a breakneck pace that keeps it from being boring at any given time. Like all Pixar films, it is a work of outstanding visual achievement – the details of the world are absolutely amazing, and often clever. Keep an eye out for a number of Pixar in-jokes, from director John Lasseter’s name appearing in a clever way on the London speedway track to the name of a movie at the local Radiator Springs drive-in resembling that of a Pixar classic. There are also nice little cultural references, such as Sig Hansen of “Deadliest Catch” fame voicing a Cars-world version of the F.V. Northwestern, the vessel that Sig captains both on the show and in real life.

Whereas the original Cars tried to re-create a 50s Route 66 American Southwest vibe, this is a full-on 1960s British spy caper feel. Everything from the supercool Finn McMissile to the gadgets to the music makes those of us old enough to remember them (or those willing to have checked them out on Netflix or cable TV) the spy movies of Caine, James Bond or James Coburn, among others. There are homages to these films scattered throughout, sometimes subtly and occasionally not so much.

This is a movie which is more about entertaining the audience than it is about blowing them out of their seats. It isn’t a bad thing to be entertained; it’s just that the bar has been set so high by previous Pixar films that it’s almost impossible for any movie to measure up. I suppose it’s not a bad thing for a film company to be victims of their own high standards – and this movie certainly is. It’s not a bad movie, it’s just not a great movie and I guess that’s enough to upset some people in the critical community. I can recommend it without a second thought, just don’t go in expecting too much other than mindless good fun and you’ll enjoy it purely on that level.

REASONS TO GO: Your kids will want to see it. Visually delightful.

REASONS TO STAY: Not on par with Pixar’s other films. Mostly fluffy, could easily have been a direct-to-cable film from a story standpoint.

HOME OR THEATER: This is going to seem sacrilegious, but I think it’s going to look just as great at home as it does in a movie theater.