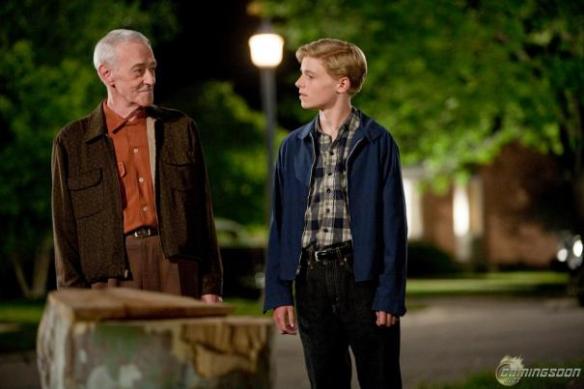 John Maloney is fully aware that youth is wasted on the young.

Everyone remembers their first love. It holds a special place in our hearts, something that is never recaptured in quite the same way. Often we can remember minute details about the object of our affection, where we were when we first realized what we were feeling, the music that was playing, even the smell of their shampoo. It’s the kind of magic that science can’t explain, that nobody can really put into words but nearly everyone can understand on one level or another.

Bryce Loski (McAuliffe) is moving into a new neighborhood, which in itself is a traumatic thing when you’re in the second grade in 1957. However, when you’re a 14-year-old boy in 1963, nothing is more traumatic than attracting the attentions of the girl next door, or in this case the girl across the street. She’s Juli Baker (Carroll) and she has the kind of smile that lights up a room, and the kind of spirit that warms that brightly lit room. Besides that, she has the kind of character to stand up for what she believes in, even if there’s risk. She also has the compassion to understand the frailties of those around her, especially her dad Richard (Quinn), who paints pictures for a living and sells them at local art shows and county fairs. She has the kindness to want people around her to be comfortable.

All that is lost on Bryce, however; he’s more concerned with the mortification of having someone besotted with him. He does everything he can to deflect her attention, some subtle and some downright cruel. The only thing he doesn’t do is tell her to leave him alone and that he’s not interested.

She takes his disinterest for shyness and redoubles her efforts. Even when he starts going out with her nemesis, Sherry Stalls (Taylor) she just sits back patiently and waits for the relationship to fizzle, which it does courtesy of Bryce’s best friend Garrett (Broussard), possibly the worst best friend ever.

Most everyone can see the shine on Juli, especially Bryce’s grandfather Chet (Maloney) who is grieving for his wife that Juli reminds him of strongly. Certainly Bryce’s Mom (De Mornay) can see it; perhaps the only one who can’t is Bryce’s dad Steven (Edwards) who is a bitter, angry man although he disguises it with a crooked grin and a manly slap on the back. Eventually all of Bryce’s little cruelties open Juli’s eyes to the thought that the boy with the dazzling eyes may not be greater than the sum of his parts. He may be, in fact, less.

This is bad news for Bryce who has begun to see Juli for what she is and has flipped for her. He’s made so many mistakes in running away from this girl; can he convince her that he is the boy she saw those years ago the day he moved in to the house across the street?

Rob Reiner has a great eye for era; he proved that with Stand By Me and Ghosts of Mississippi. He’s gone a few years without a truly outstanding movie on his resume, although he has plenty of great movies, including The Princess Bride, A Few Good Men, Misery and When Harry Met Sally among them.

Here he takes the acclaimed Wendelin van Draanen young adult’s novel and transplanted it from a modern setting to 1963, an era in which he seems comfortable filming, possible (because he was a teenager himself at the time albeit an older one (his IMDB page lists his birth date as 1946). What he does retain from the novel is the alternating point of view, relying on voice-over narration from the two main characters to address the same incidents from different points of view, something Kurosawa made famous in Rashomon only on a grander scale.

It works here because everything that happens is about motivation, and you can’t always tell what someone’s thinking by what they do and it’s very important that the audience understands what the two young people are thinking. That Reiner makes the back-and-forth work so seamlessly is a tribute to his skills as a filmmaker.

The movie is sentimental without being unnecessarily sweet; this is largely because the two young actors, Carroll and McAuliffe are so stellar. It may be my imagination, but we seem to be going through a phase where really good juvenile actors are much more common, from Dakota Fanning to Abigail Breslin to Saorise Ronan and now, these two. Carroll, in particular, strikes me as the kind of actress who could have a legitimate career that could extend well beyond her teen years; sometimes you catch a glimpse of that and it strikes a chord in you. I may be wrong about her, but it wouldn’t surprise me if I was right.

There are some notable performances in the supporting ranks as well, particularly from Maloney who always manages to project character and kindness in every role he plays; as the grandfather he is wise and giving, although saddled with a son-in-law who is not. Edwards, who we’re used to playing sympathetic roles as in “E.R.” and Revenge of the Nerds, plays a thankless, unlikable role and manages to give the character hidden depth; just enough of the source of his frustrations are revealed to hint at humanizing Steven Loski and making him almost sympathetic.

There is a different family dynamic between the Loskis, who are outwardly more prosperous but internally dysfunctional, and the Bakers, who are outwardly struggling and inwardly close. The differences between the two fathers – Richard who is loving, artistic and a little bit Bohemian and Steven who is uptight, condescending and boorish – help explain why the two children are who they are. I have to say that one thing that impressed me was that nothing here seemed manufactured in any way; everything about the plot is organic and flows nicely, even the flipping back and forth between like and dislike for Bryce and Juli.

Quite honestly, I initially wasn’t looking forward to seeing this and did mostly because something about the trailer spoke to Da Queen. While I like Reiner as a director, his recent track record has been spotty and I was thrilled to see him not only return to form, but deliver a movie that will seriously challenge for the number one spot on my year-end list this year. I was touched by the movie and left it feeling warm inside, remembering my own childhood crushes and aware of how wonderful sitting in a sycamore tree and able to view the world around you can be. I tell you, hand to God, you will not find a movie with more heart than this one.

REASONS TO GO: Beautiful and rich in detail, this presents a romance in an organic and non-manufactured way that is charming and yet realistic. This is a movie that will grab you by the heart and keep holding you there.

REASONS TO STAY: People who have difficulty dealing with the finer emotions may find this boring.

FAMILY VALUES: There are a couple of scenes that might be a little difficult for the smaller sort to understand, and there are a few suggestive words here and there but certainly this is fine for teens and most pre-teens as well.

TRIVIAL PURSUIT: Rob Reiner founded Castle Rock, the production company behind Flipped but later sold it to Warner Brothers; this is the first time he’s worked with them since 1999.

HOME OR THEATER: While much of this movie is shot on an intimate level which is normally fine for home viewing, I think the overall experience is heightened by seeing it in a theater.