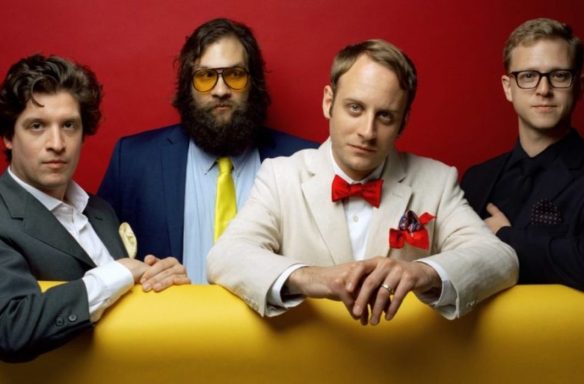 This is truly a band of gentlemen.

Deer Tick is far from a household name – are there any rock and roll household names anymore that didn’t arrive via some TV reality competition show a la American Idol or America’s Got Talent? The truth that rock and roll has become a niche genre in pop music; the bands that make it generally have some sort of hip-hop pedigree but I digress somewhat.

The indie rock band Deer Tick has pushed on through what are fairly long odds to go from, as lead singer/songwriter John McCauley proclaims, “being an indie band to being a cult band” and yes, there is a distinction. We see plenty of performance footage from house parties in their native Providence to the film’s nadir, a seven day residency at the 600-seat Brooklyn Bowl to simultaneously celebrate the band’s tenth anniversary and the incoming New Year (the residency culminated with a New Year’s party in 2014). That their most recent footage is three years old robs the film of any immediacy it might have had but then, I don’t think anyone is clamoring for a Deer Tick biography.

And yet we got one and I must admit that it is pretty thorough as these things go. McCauley is a reasonably competent raconteur and his band mates contribute some fairly interesting stories about the life of a touring band in the age of Spotify. When you make a documentary about a cult band, the question becomes “will the movie make any new fans for the band?” The answer is likely not; the performance footage tends to be choppy and often shot on cell phones. You get a sense of some of the songs (and Dennis Ryan explains in depth why he needed to write a song about John Wayne Gacy) but for the most part we just hear snippets. The performances were often characterized by heavy drinking and drugging which makes them far more interesting if you’re present and also drinking and drugging. I will plead guilty to loving the Beat Farmers but being shitfaced with the band will do that for you.

And there’s the rub. The things that make fans rabid about a band is not so much a devotion to their music although that’s where it begins. No, the connection comes through interaction, a feeling of being part of the band which getting drunk with them will kind of do. When you’re as plastered as the band is, you become a part of the show.

Some time is spent on McCauley’s problems with drugs and how marriage and fatherhood have caused him to cut way back on his psychedelic consumption (although not completely eliminated it). There’s also some morbid talk about him joining the so-called 27 Club, the group of artists (mainly rock musicians) whose only qualification for membership is dying at age 27. McCauley was eager to join the club along with the likes of Janis Jopllin, Jimi Hendrix and Kurt Cobain. For anyone who watched the old VH-1 documentary series Behind the Music this will be familiar turf.

I found myself, not being a fan of the band or at least a devoted one, checking my watch a little bit as the film approached its end. There’s no doubt that this is a movie for the fans and the rabid ones at that. If you’re not a fan of the band or unfamiliar with their music you’re way better off checking out some of their recordings on Spotify if you’re interested in really checking them out. I would recommend the War Elephant album as a starting point and in particular “Art is Real (City of Sin)” if you want to fall in love – and who doesn’t want to fall in love with a band? It’s wonderful to make a discovery that only you and a select few are aware of. That makes the emotional connection even stronger. Like all romances though, one must take some caution though; not everyone will understand your love. That doesn’t matter so much though – love is love, even when it is given to a band. At least you’ll always have the music.

REASONS TO GO: The performance footage is generally the best part.
REASONS TO STAY: Way too long and detailed, the film will likely only appeal to big fans.
FAMILY VALUES: There is plenty of profanity and some drug references.
TRIVIAL PURSUIT: Deer Tick was originally formed in Providence, Rhode Island. They are currently based in New York.
CRITICAL MASS: As of 6/17/18: Rotten Tomatoes: 60% positive reviews: Metacritic: 48/100.
COMPARISON SHOPPING: Shut Up and Play the Hits
FINAL RATING: 6.5/10
NEXT: Tattoo Girls