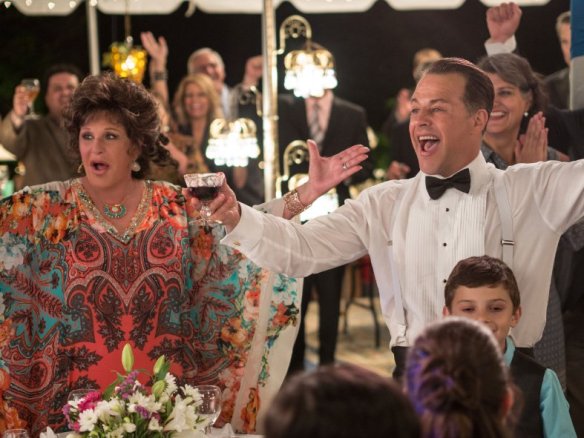 Like many others, I was a victim of the charm of My Big Fat Greek Wedding. I won’t say that I fell in love with the movie, but it did blindside me a little bit and I regard it fondly, even though it was fairly flawed. Some movies will do that to you.

And now most of the original cast is back. Toula (Vardalos) has been married more than a decade to Ian (Corbett) who is now a principal at the local high school. Her travel agency went out of business and she is back working at the family restaurant and has proven herself an adept business woman. Her family is still around her like the albatross around the neck of the Ancient Mariner. She lives in a block of four houses on a quiet suburban Chicago street that all belong to members of her family.

That family includes patriarch Gus (Constantine) who believes himself to be descended from Alexander the Great and that everything useful or wonderful in the world came directly or otherwise from Greece, often with the flimsiest of evidence to back him up. His long-suffering wife Maria (Kazan) wants nothing more than to lead a semi-normal life, but with sisters like Voula (Martin) who never met a bodily condition too gross to discuss with anyone, that is quite the challenge.

Throw an angsty teenage daughter (Carides) into the mix and you get all the flavors of Greece in one soup. But even that is not enough when the discovery is made that due to a clerical error, Gus and Maria were never actually married. While Gus is eager just to rectify the error and go on with his life, Maria wants a big fat Greek wedding, the one she never got in the old country. It falls upon Toula to arrange everything and balance the family business, her husband’s frustration that the two of them have not been intimate for awhile, and her daughter’s collegiate choice that may take her away from Chicago and of course with her maniac relatives interfering in every way possible, this is a dance that even Zorba couldn’t manage.

All the elements of the first movie are here in the second, but as is usually the case, lightning doesn’t get captured in the bottle quite so easily. While Vardalos remains one of those rare actresses who simply is irresistible and cute onscreen, so much so that you want to take her home with you, for some reason this movie doesn’t work as well as the first. Perhaps it’s just a case of the first existing because it set a high bar for the second. But there are flaws here that can be explained.

For one thing, it feels sometimes that Vardalos who as in the first movie wrote the script was trying too hard to make her family eccentric. I think we got the point and a little more restraint would have been just as effective. I love Andrea Martin as a comedienne and she steals a lot of scenes here and Constantine who hasn’t made a full length feature film since the first big fat Greek wedding 14 years ago (yipes!) also dominates the screen whenever he’s on it.

The Nikki subplot really didn’t interface as well with the rest of the material. I can kinda see what Vardalos was trying to do – show that Toula was becoming exactly like her mother – and while that is an admirable and salient point, it wasn’t made as well as it could have been, particularly since the comedy is a little bit over-the-top. Again, restraint would have been welcome.

The movie is curiously flat when it comes to onscreen energy, which is normally the purview of the editor and the director. I’m not sure if that is the case here, but certainly the movie doesn’t have the same vibrant feel of the first. Perhaps there is the stigma of repetition, in that most sequels rarely capture the same magic as the original, but it could also have been that much too long has passed since we last visited this Greek comedy and that had its effect on our perception of the finished product as well.

I am a fan of Nia Vardalos and I was rooting for this movie to be better than it was. It will likely make it to cable earlier than intended and then fade away into obscurity but I am strangely glad that it got made anyway. I can’t really recommend it (hence the score) but I still have a soft spot for it anyway. If you were as charmed by the first movie as I was, you will likely be disappointed in the second, but you may very well find a soft spot for it as well. So please don’t mind if I get a second helping of spanikopita and enjoy a movie that should have been better.

REASONS TO GO: Occasionally shows the charm of the original. Vardalos remains sweet and charismatic in the lead role.
REASONS TO STAY: The film lacks energy. Occasionally the material becomes overbearing. The plot is wafer-thin.
FAMILY VALUES: There’s a little bit of sexually suggestive material.
TRIVIAL PURSUIT: Filmed in Toronto, substituting for the Chicago location of the original.
CRITICAL MASS: As of 6/4/16: Rotten Tomatoes: 28% positive reviews. Metacritic: 37/100.
COMPARISON SHOPPING: Father of the Bride
FINAL RATING: 4.5/10
NEXT: The Boss

Kevin Spacey, a victim of the economic downturn.

We all make mistakes in life, some more serious than others. When we foul up, it is on us to pick ourselves up, dust ourselves off and make life work again. In order to do that, sometimes we must re-invent ourselves. That’s an opportunity to rectify past mistakes but only if we learned from them.

Robert Axle (Spacey) is an infomercial billionaire. Or, rather, he was. One of his inventions had a design flaw, causing the user to be maimed. One prison center and several class action suits later, Axle is released from prison. His billions are gone; what was left after the settlement of the suits was spent by his now ex-wife Lorraine (Madsen) on philanthropy and a frivolous career move as a singer. Her new boyfriend Jerry King (Robinson) eagerly aided and abetted the dissolution of his nest egg.

Without any place to go, he is forced to move in with his estranged daughter Claire (Belle) and take a job at a Wal*Mart-like entity where his boss Troy Colangelo (Knoxville) offers endless platitudes which are ultimately meaningless. To make matters worse, Claire’s roommate Phoebe (Graham), a lesbian and a hater of men who initially thinks Robert  is the epitome of the male species – i.e. absolutely despicable – but falls for him anyway.

Robert knows just one good idea could conceivably take him back to the top and soon enough he has it. He takes it to his old company but they pooh-pooh it – and then steal it as their own. Robert has had his share of sins in his life, but the punishment seems to be well beyond what he deserves. Still, he plugs along, getting Troy to invest in his new product and enlisting the help of long time ally Sam Bergman (West) to help design and build the new product, it looks like his way to the top is assured. That’s generally when the floor drops out from under you.

This is one of those movies that shows up that gets a “cup of coffee” release on a few screens here and there (generally in New York and maybe Los Angeles) and then goes straight on to home video. With home video, streaming, and various other ways of watching movies than going to theaters or watching them on television networks, the demand for films has increased while the quality has remained flat.

That has led to a cornucopia of mediocre movies out there that you’ve never heard of but are easily available through Netflix, on cable or through YouTube in some cases. The issue with that is that some pretty decent movies wind up falling through the cracks and getting lumped with the chaff.

This is one of those movies. Spacey has been a performer who rarely disappoints over the past 20 years; even though not all of his movies have been financial or even critical successes, you can never accuse him of phoning one in and he doesn’t here. He takes Robert Axle from broken and defeated to arrogant and driven, ending up as humble and loving. In other words, he takes us on Robert’s journey and allows us to understand the road that got him there. And he makes it look effortless in doing so.

Graham is one of my favorite actresses. Not only is she shagadelically beautiful but she also has plenty of skill. Her angry lesbian is written kind of one-dimensionally but Graham gives her some depth, mostly from the way she interacts not only with Robert but with Claire as well. I truly wish she would get some better parts to work with.

The story is pretty predictable and it is mainly Spacey’s performance that gives it any particular nuance. You know pretty much how it’s going to end up and what steps are going to happen before it gets there. Normally that would be reason enough to not even bother writing a review – but Spacey gives this movie a reason to be seen.

WHY RENT THIS: Even in bad films Spacey is always entertaining.

WHY RENT SOMETHING ELSE: The plot is kind of predictable and occasionally nonsensical. Characters are mostly clichés.

FAMILY VALUES: There’s a fair amount of bad language as well as some sexuality.

TRIVIAL PURSUIT: Spacey shot this while concurrently working as artistic director of the Old Vic in London, one of the most prestigious positions in the legitimate theater.: