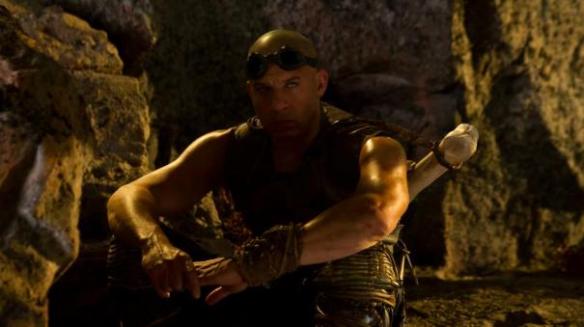 Some characters need to be on their own turf to really be effective. Indiana Jones, for example, is at his best in some ruined palace, searching for treasure; high society shindigs are not his thing. As for Richard B. Riddick, well, let’s put him on some forgotten miserable barely habitable rock in the middle of deep space populated by vicious, deadly creatures and we’re interested.

And that’s just where Riddick (Diesel) finds himself after being betrayed by Lord Vaako (Urban) of the Necromongers (from The Chronicles of Riddick which preceded this). The world is desolate, filled with carrion eaters, a jackal/dog hybrid and a slithering nasty that has a venomous sting on its scorpion-like tail and a penchant for hiding in standing pools of water. Riddick is left on this planet to die, his leg broken and without any supplies or weapons except for a tiny little throwing knife.

Riddick manages to set his broken leg the hard way and finds his way to a grassland which is a bit less predator-filled. He manages to tame one of the jackal/dog puppy hybrids and keeps it as a pet and watchdog. He survives for years this way.

When he sees a storm brewing, he realizes his happy haven is about to be overrun by the slithering nasties. He needs to get off this rock and fast. He’s found a mercenary outpost and presses the panic button, making sure that he is detected. Given the bounty on his head, it isn’t long before two sets of bounty hunters – one led by the sleazy Santana (Molla) with his brutish sidekick Diaz (Bautista), the other a group of mercenaries led by Boss Johns (Nable) who has a personal stake in Riddick. He is supported by the laconic Moss (Woodbine) and the aptly-named Dahl (Sackhoff), a lesbian with no time for Santana’s shenanigans and the ability to kick his ass to back it up.

As you might guess, the two parties begin feuding almost immediately and Riddick is forced to pick them off one by one. The storm is almost upon them and once it gets there, things are going to get really, really bad.

This is more of a throwback to the first film in the series, 2000’s Pitch Black more than its successor. That was more of a thriller than the space opera that was The Chronicles of Riddick. Neither movie did particularly well at the theatrical box office but both performed much better on home video. Of course, it’s taken nine years for the second sequel to hit the screen (has it really been that long?) and tastes have changed somewhat since then.

Diesel has been identified with this role in many ways more so than Dom Toretto from the Fast and Furious franchise. Riddick is in many ways the ultimate badass; he’s a survivor no matter how overwhelming the odds and it is a prudent man who is terrified of Riddick. Yes, he has had his eyes surgically altered so that he can see in the dark – an effect they used well in the first film but for whatever reason have shied away from ever since.

The rest of the cast is pretty much serviceable but then they really aren’t given a whole lot of personality other than the one-dimensional kind. Sackhoff, best-known to genre fans for her run as Starbuck in the highly respected Battlestar Galactica reboot on SyFy a few years back, shows some big screen promise; she’s got tons of charisma, oodles of good looks and plenty of chops to become the female action hero that has been sorely lacking in Hollywood.

The creature effects are pretty spectacular and all of the non-human monsters look believable and deadly. Even Riddick has problems with the slithering nasty and realizes that discretion is the better part of valor with those baddies (he spends some time developing an immunity to the venom but rarely takes them on head-on if he can avoid it). While the slithering nasties (called mud demons  by and large) aren’t quite as lethal in some ways as the creatures Riddick faced in the first film, they do resemble the titular Aliens in some ways.

There is a good deal of posturing and posing, that kind of testosterone-slurping “my balls are bigger than yours” competitiveness between the various Mercs and Bounty Hunters (including Dahl) which gets a bit tiresome over the length of the film. The film’s climax is also a bit of a letdown, lacking epic scope and originality. It just kind of ends.

Thanks to a pretty minuscule budget by sci-fi standards, it seems logical that the movie will make a tidy profit, making the likelihood of a fourth film in the franchise (fifth if you count the short The Chronicles of Riddick: Dark Fury) pretty strong. That won’t bother me in the least; as anti-heroic as he is, Riddick is one of the more compelling characters to come along in the movies in some time. I wouldn’t mind seeing what else he gets himself in to.

REASONS TO STAY: Too much posturing. Denouement lacks excitement.

FAMILY VALUES:  Quite a bit of violence, some brief nudity and sexuality and a whole lot of bad language.

TRIVIAL PURSUIT: Diesel agreed to do a cameo in The Fast and the Furious: Tokyo Drift in exchange for the rights to the Riddick franchise in order to secure financing independently for the film.

NEXT: The Act of Killing