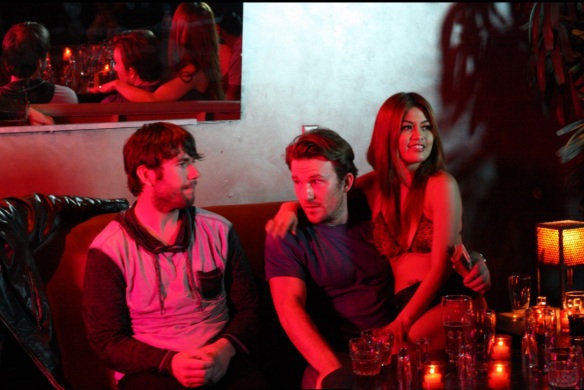 A party with macho guys, lots of booze and drugs and a mouthy hooker? What could possibly go wrong?!

Sometimes a movie tells you right off the bat what kind of movie it’s going to be. In the case of this one, the opening scene starts with a toilet in which the water is stained with what appears to be urine. In comes one of the characters and throws up into the commode. Eventually he notices that there’s a dead Asian girl (Star) in the bathtub.

There are five guys who have passed out in the living room; Smoke (Harris), Bird (Thompson), Vince (Bartok), Seanie (Rabe) and Mikey (Ó Héalai). Most of them have criminal records; one of them is headed to prison for dealing shortly; in fact, the party is a farewell party to their buddy. And now this happens.

What transpires over the next several hours is an attempt to figure out what happened to the girl. As one of the men says to the others, “We’re not gonna f*** each other.” And that’s just what they proceed to do. It’s a bit like a Bizarro World Hangover in which nobody can remember what happened over the past 24 hours until bits and pieces begin to return to memory in segments that are preceded by a static sound like a old television being tuned on UHF.

This is definitely a micro-budgeted indie and while there’s nothing wrong with that, someone needed to spend a little more of the budget on lighting; much of the film is dimly lit to the point where at times it is hard to tell the difference between some of the actors who with the exception of Thompson all have similar looks.

The relationship between the guys feels genuine to be fair. They talk like guys who have been friends from womb to tomb. They dress similarly in the way that guys who have bonded tend to dress the same. They act like they’ve been friends forever. I don’t know if there was any pre-existing relationship between the actors but it sure feels like they’ve known each other forever. If they haven’t, then all the more kudos to them.

I would have liked to have seen a bit more character development; all five of the guys tended to blend together somewhat to the point that at times I couldn’t remember who it was that was talking. Still, the story is mildly compelling and there is enough here to make me think that the filmmakers have a future, but there’s not enough here that lends itself to an unhesitant recommendation.

REASONS TO GO: The dialogue and male relationships are authentic.
REASONS TO STAY: The lighting is perpetually dim. The flashbacks are annoying. There’s a whole lot of man-posturing and not enough character development.
FAMILY VALUES:  The theme here is plenty adult; there are also graphic nudity, sexual content, a surfeit of drug use, some violence and a whole lot of profanity including racial slurs.
TRIVIAL PURSUIT:  The real Seanie Sugrue appears in a cameo as a vagrant.
BEYOND THE THEATER: Amazon, Google Play, iTunes, Vimeo,
CRITICAL MASS: As of 1/17/17: Rotten Tomatoes: No score yet. Metacritic: No score yet.
COMPARISON SHOPPING: Very Bad Things
FINAL RATING: 4/10
NEXT: The Ivory Game