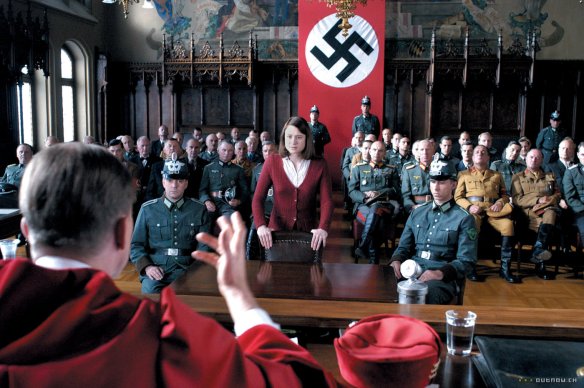 Sophie Scholl's trial was stacked slightly against her.

When confronted by absolute evil, people of good conscience are required to act. In reality, we know that’s seldom the case and when it does happen it rarely ends well for the person who acted.

It is Nazi Germany, February 1943. In Munich, a young woman named Sophie Scholl (Jentsch) and her brother Hans (Hinrichs) are distributing anti-Nazi leaflets at the University there. They are members of an underground group called The White Rose who stood against the government and were hoping to urge the students to rise up against the Nazis.

The two are just finishing up their task when Sophie accidentally knocks a pile of the leaflets off a balcony where a janitor sees her. He turns them in to the authorities – not so much because he’s a Nazi toady but because he was irritated at having to clean up the mess.

The two are brought to the police station, where Sophie is interrogated by Robert Mohr (Held), a police inspector who while a member of the Nazi party is also a somewhat compassionate man who views Sophie as more of a misguided youth rather than as a dangerous dissenter. Most of the interrogation is a foregone conclusion; the police know that Sophie and Hans did it.

Justice, or what passes for it, works swiftly in Nazi Germany and their trial takes place within a few days. There an outspoken and shrill judge (Hennicke) tries the two Scholls as well as Christoph Probst (Stetter).Sophie is repeatedly offered chances at clemency if she gives names to the tribunal; she refuses, protecting the other members of The White Rose. The trial soon reaches its inevitable conclusion and Sophie, her brother and Probst would pay the ultimate price for their dissention.

Sophie Scholl is a national heroine in Germany, particularly in Bavaria where she lived and died. The filmmakers used actual transcripts of her interrogation and trial, recently unearthed from the former East Germany, to supply the dialogue. Survivors of the period, including members of The White Rose (few as they are; most of the organization was wiped out by the Nazis) who knew Scholl well, contributed to creating the character of Scholl for the movie.

There is an authenticity to the movie that rings true. Sophie’s interrogation contains few grand gestures, few political statements; for the most part, it’s all police procedural – where were you, why were you carrying a suitcase, are you a member of a subversive organization and so on. The very mundane nature of the interrogation makes it all the more sinister and tragic. Mohr, by all accounts a decent man who was horrified by what happened to Scholl and her co-conspirators, is persistent and certain in the justness of his cause. He can’t understand why Scholl, whom he considers privileged and spoiled, would speak out against a system that was responsible for getting him to a position he might never have obtained otherwise. Held gives a note perfect performance of the role.

Jentsch is astonishing and makes Scholl very human. She is no martyr, no Joan of Arc looking heavenward with soulful eyes (although Scholl, a devout Catholic, prayed regularly) but certain of her beliefs. She is terrified of what is to come but refuses to endanger others no matter what the cost. There is a scene near the end where she is allowed to meet with her parents one final time that is absolutely sparkling. The parents are heartbroken that their children are about to die, but justifiably proud at the same time.

Hinrichs didn’t get the acclaim that Jentsch and Held got but in his own right does a terrific job. Hans Scholl has taken a backseat in the hearts of Germans in many ways but he was as brave and suffered the same fate as his sister. He doesn’t get the kind of screen time that Jentsch gets (we see none of his interrogation) but he makes the most of his.

In an era when young people in Egypt, Libya and Wisconsin are rising up to say “no” to tyranny, the movie is particularly poignant. While perhaps the protesters in Madison face mere jail time for their demonstration, the students elsewhere are confronted by the very real possibility that they may get shot and killed.

This isn’t a movie that’s flashy or histrionic. We do not see Scholl’s execution; we only hear it against a black screen. The movie proceeds at a slow, inexorable pace that some may find off-putting but the effect is powerful nonetheless. The movie received a nomination for Best Foreign Language Film at the 2006 Oscars and while it didn’t win, it certainly was good enough to. The movie hasn’t received a good deal of attention over here but if you’re looking for a compelling drama and you’re willing to look outside the box a little, this is a perfect choice for your DVD viewing.

WHY RENT THIS: Captures a little known element of the war (for Americans). Outstanding performances by Jentsch, Held and Hinrichs.

WHY RENT SOMETHING ELSE: The movie proceeds at a somewhat slow pace.

FAMILY VALUES: There are a few disturbing images and some smoking.

TRIVIAL PURSUIT: The movie was shot in chronological order to help the actors feel what Sophie and Hans Scholl felt in their ordeal.

NOTABLE DVD EXTRAS: There is a feature that contains interviews with people who knew Sophie Scholl and members of the White Rose and captures their commentary on how accurate the movie was in depicting her. It offers some amazing insights.