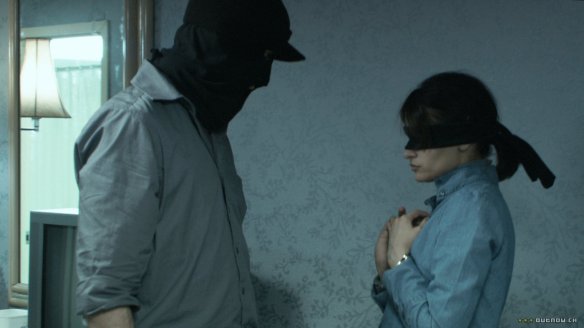 Luisa Williams thought she was playing blindfolded musical chairs on the Ellen Degeneres Show but she was so wrong.

We read about suicide bombers in the Middle East every day. One has to wonder what kind of person would do such a thing; even more to the point, would it be possible for an American to contemplate doing such a thing?

A young 19-year-old girl (Williams) is more than contemplating it. She has made the decision to detonate a bomb in Times Square. She is picked up at the bus station by an Asian driver and taken to an anonymous hotel room where she meets her handlers, all of whom wear black ski masks. She herself is often blindfolded.

The conversation is almost blindingly banal. She is told she must fit in without standing out. She asks for pizza. She waits by a cell phone for periodic calls from her handlers. Eventually, they bring a backpack filled with explosives and she is once again driven to Times Square. There, she walks around, stopping to snack once in awhile, summoning up the courage to detonate the bomb.

That is the movie in a nutshell. Director Loktev deliberately withholds as much information as she can; we’re never told why the girl, who is identified only as “She” (except on her fake ID on which she is called Leah Cruz), is doing what she wants to do. We know nothing of the organization that is preparing her for the task. We don’t know why Times Square was chosen (other than the obvious) or even what kind of statement the terrorist organization is trying to make.

What Loktev does is concentrate on the bomber’s face. She is young, elfin and not unlike any other girl you might see in a college dormitory. Her eyes do not reflect madness or obsession; they are sad and frightened, or dull and resigned. She lapses into whispered prayers from time to time although it isn’t clear who she’s praying to or even why. The effect has been compared to Carl Dreyer’s The Passion of Joan of Arc which isn’t inaccurate. There, as here, there many tight shots of the actress’ face and rarely is there a shot where her face isn’t visible.

Williams’ face is the canvas that Loktev chooses to use to tell her story and I think that canvas is deliberately made to be austere and nearly blank. We are made to choose our own conclusion, which is a lot of work for a movie-going public which tends to prefer having their ideas handed to them, neatly wrapped with a bow.

Loktev does a magnificent job of creating a great deal of tension when the girl is loose in Times Square. We don’t know from moment to moment if she is going to decide to stop and pull the trigger. When she seems about to, one actually flinches.

Unfortunately, the movie is a victim of its own conceit. In trying to juxtapose the banality and boredom of waiting for the task at hand to be performed and the tension and brutality of the act itself, we are left with far too much emphasis on the former. I will admit that it does make the latter more effective, but I think we spend far too much time watching the girl eat, read, and scratch herself. It numbs the mind and allows the focus of the viewer to wander, never a good thing.

Loktev is clearly a talented and gifted writer/director, and I expect that in years to come we might be hearing a great deal from her. This isn’t Oscar material mind you, but it is a solid effort – flawed, but solid. Those who like their movies a little more challenging might well enjoy this. Those who prefer to be spoon-fed in the cinema should probably steer clear.

WHY RENT THIS: An innovatively told look at a suicide bomber on American soil. The tension mounts as the movie lurches towards its conclusion.

WHY RENT SOMETHING ELSE: There are a lot of scenes meant to portray the banality of the moment juxtaposed with the seriousness of the situation, but at times it gets to be too much and winds up being a bit boring quite frankly.

FAMILY VALUES: Although the movie is unrated, there is a little bit of foul language; the subject matter is a bit adult and the storytelling method may be a bit much for kids.

TRIVIAL PURSUIT: This is only the second feature to be directed by Loktev; her first was Moment of Impact in 1998.