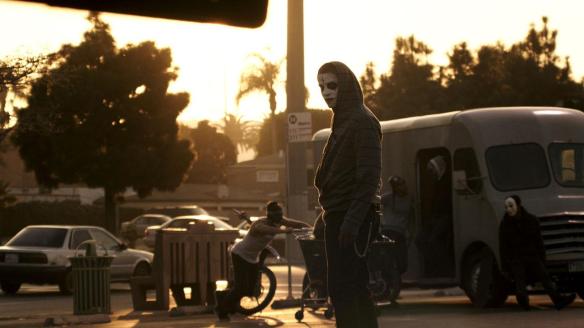 Has it been a year already? Oh, right, it’s time for the annual purge, a single night where the New Founding Fathers allow the people of the United States to run wild in the streets, where all crime is legal including murder and sensible people lock themselves in their fortress-like homes in order to survive the night. Not that it will help you if you aren’t wealthy enough to afford the very best protection, or if your car breaks down on the way home…or if you have some purging of your own to do. Happy purging, people.

(Image) Edward Furlong, Monica Keena, William Baldwin, Andre Royo. Nine survivors of a nuclear holocaust as World War III rages gather at a farmhouse in rural Texas to await their fate. Radiation sickness, hunger, desperate refugees and their own bickering threaten to do them all in.

(Cohen Media Group) Jean Reno, Michael Youn, Raphaelle Agogue, Julien Boisselier. A great French chef who has become a brand name in France has found inspiration lacking as of late. The capital partner who essentially owns his restaurants is threatening to install a new chef in his own restaurant. Salvation may come in the form of a mule-headed, opinionated young chef who is brilliant and creative but impossible to get along with. A favorite at this year’s Florida Film Festival, you can read my review of the movie here.

(Disney) Starring the voices of Dane Cook, Julie Bowen, Ed Harris, Hal Holbrook. After a damaged engine puts Dusty Crophopper’s racing career in jeopardy, he decides to put his talents to good use. He joins the aerial firefighting unit guarding historic Piston Peak National Park. However, he soon finds that it isn’t all that he imagined it would be.

Rating: PG (for action and some peril)

(Columbia) Cameron Diaz, Jason Segel, Rob Corddry, Rob Lowe. A couple whose marriage has been in the doldrums for some time decide to liven things up by making a sex tape. It works and they find their relationship clicking on all cylinders for the first time in years. However, the video – which was supposed to have been erased – ends up on their cloud which is connected to a bunch of devices they’ve given out as presents. Getting those devices back will be the easy part – keeping their sanity and their marriage together will be harder.

Rating: R (for strong sexual content, nudity, language and some drug use)

Wish I Was Here

(Focus) Zach Braff, Kate Hudson, Mandy Patinkin, Josh Gad. A 30-something husband and father comes to a point in his life where he realizes that he needs to get serious about his responsibilities and grow up but that’s not an easy proposition in his family.

See the trailer, interviews, a featurette, a clip and B-roll video here.