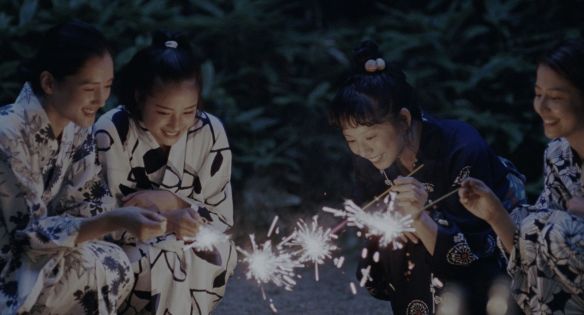 The Japanese realize that life is contradiction; the hectic, non-stop pace of Tokyo and the fragile beauty of cherry blossoms coexist in their culture. While it sometimes feels like Tokyo is winning the war within Japan’s culture (although I would prefer characterizing it as more of an animated argument), films like this one are proof that the cherry blossom is still strong.

In an old wooden house near the ocean in the seaside city of Kamakura (about an hour south of Tokyo by train) live three sisters who inherited the house from their grandmother. The oldest is Sachi (Ayase), a nurse who raised her other two sisters after their father left for another woman and their mother, devastated, abandoned them. She is bitter towards both her parents, and in a bit of irony is carrying on an affair with a married doctor (Suzuki) that works in the same hospital.

The middle child, Yoshino (Nagasawa) is a bit of a party animal, getting involved with a conga line of bad relationships and drinking much too much. She works in a bank and doesn’t take life seriously and she is constantly arguing with her elder sister. Finally there is Chika (Kaho), a teen just out of high school who works in a retail store and is perpetually smiling and happy. Her boyfriend may look slovenly but he has a good heart.

One day they are notified that their father has passed away. Sachi has no interest in attending the funeral, especially since it is in a rural village far away but Yoshino and Chika go mainly out of politeness. They don’t have many memories of their dad. They arrive at the funeral and meet Suzu (Hirose), the 14-year-old daughter that their father had by his mistress (and later his wife) who had also since passed away. She was now living with her father’s third wife who seemed uninterested in Suzu and her future, although she was pleased that her step-daughters had attended the funeral – including Sachi who showed up unexpectedly.

It became clear to the three Koda sisters that their half-sister was in a bad situation and that she seemed to be a really genuine person – and it turned out that it wasn’t the wife who nursed their father through his final illness but Suzu. Sachi, moved by a sense of responsibility, asks Suzu if she would like to move in with them and Suzu is absolutely thrilled to say yes. When the three sisters leave on the train, the fourth sister sees them off with absolute joy.

When Suzu moves in, she is adored by those who know the sisters. She joins a local club soccer team and excels. She makes new friends at her new school. The owner of a local café is charmed by Suzu who in turn adores her whitefish bait toast. As for the sisters, they are overjoyed to have her in the house and even though all of their lives are changing, there is more love in the house than ever.

Yoshino gets assigned to assist a loan officer who goes to various businesses to arrange loans and finds herself becoming more responsible and less flighty. Sachi, who has assumed the mother role in the family since she was a teen is beginning to see that she can have a life beyond her sisters if she chooses – and that she can do things just for herself. She is also learning the value of forgiveness.  And Suzu is discovering what having a support system means. In the year from Suzu’s arrival the lot of the sisters changes immeasurably.

Kore-eda is one of Japan’s most promising directors and he has put together a string of impressive films to his credit. Many of them are like this one, which is incidentally based on a popular Japanese manga. He tends to put together movies whose plots on paper look unremarkable, but when experienced on the screen become powerful indeed. This is the kind of movie that makes you feel better when it ends than you felt when it started.

It is also a slice of Japan on celluloid. We get a look how the average Japanese family lives from day to day, be it paying homage to their ancestors, delivering gifts to family, funeral rites and courtship, all of which is a little different than we Westerners are used to, although in many ways the cultural differences between East and West are shrinking.

The cinematography is occasionally breathtaking as we see both the rural villages and the small cities (Kamakura has a population of about 174,000 people at present). The film is presented through four different seasons, so we get a sense of the ebb and flow of life for the sisters. Their old house is a little run down but still beautiful in a similar fashion to a beautiful woman who hasn’t taken as good care of herself as she could but remains in her twilight years still a beauty by any standard.

The four actresses who play the sisters all do standout work here which isn’t surprising considering the reputation Kore-eda has for being an actor’s director. Most of the attention is going to Ayase and Hirose for their work as Sachi and Suzu but the other two have nuanced performances in smaller roles. I might have liked a little more attention paid to the two remaining sisters but the movie is fairly long as it is.

This is not a movie that demands your attention. Instead, it presents itself quietly, without fanfare or fuss and just lets you get sucked under its beguiling spell. Honestly, I had thought I might like this movie when I saw the trailer but how much I liked it was a complete and pleasant surprise. Kore-eda creates a beautiful, sweet and melancholy world that you want to dwell in long after the lights come up and he didn’t need a ton of special effects and CGI to do it. If only people realized that you don’t have to see a Star Wars movie to find a new and exciting world to spend time in.

REASONS TO GO: A nice look at Japanese culture and daily life. All four of the sisters have their own personalities and foibles. There’s a mixture of optimism and melancholy that is nicely balanced.
REASONS TO STAY: May lean a little bit too much to the feminine side for some male moviegoers.
FAMILY VALUES: There is a small amount of profanity and some adult themes.
TRIVIAL PURSUIT: All four actresses who played the sisters were nominated for the Japanese Academy Award of which Hirose was the lone winner.
CRITICAL MASS: As of 9/8/16: Rotten Tomatoes: 92% positive reviews. Metacritic: 74/100.
COMPARISON SHOPPING: Mustang
FINAL RATING: 9.5/10
NEXT: As I Open My Eyes