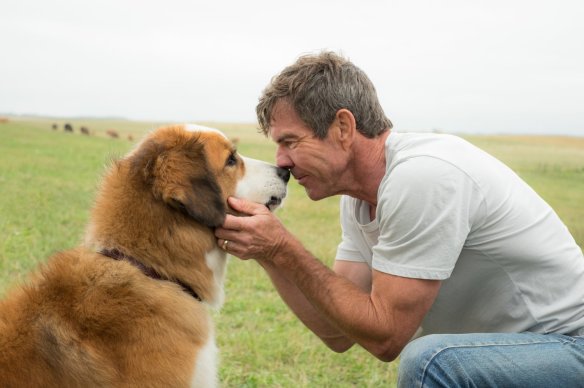 Dennis Quaid goes nose-to-nose with one of the canine stars in the film.

Let’s get one thing straight; I am a dog person. Seriously, Da Queen often shakes her head at the extent of my love for the canine species. I have trouble watching cruelty perpetrated to dogs on film (even in animations) and quite frankly all it takes is my dogs whimpering just the right way and I’m putty in their paws. In other words, I’m pretty much the target audience for this film so keep that in mind when reading the review.

The essential concept is that we look at the lives of a variety of dogs, all voiced by Gad, who have been reincarnated one life from the other complete with the memories of previous lives. Bailey belongs to a young boy (Ghelsar) named Ethan. Ethan rescued Bailey from the inside of a hot car and with the support of his mother (Rylance) and over the grumbling of his salesman father (Kirby) he is allowed to keep him.

As Ethan grows into his teen years (Apa) it becomes clear that his father is a drunk and abusive as well, frustrated over his lack of success. Ethan has become a high school football star and through Bailey’s timely intervention, the boyfriend of beautiful Hannah (Robertson). He is well on his way to a college scholarship but a tragic accident changes Ethan’s life forever.

Ethan does go off to college but only after breaking up with Hannah. Bailey goes into a tailspin (no pun intended) without Ethan and not long afterwards, his health fails and Bailey passes on. However, to Bailey’s surprise he wakes up young…and female. Now he’s…I mean, she’s…Ellie, a police dog whose handler (Miller) is lonely and maybe content to be that way – or maybe not. Still, Ellie is brave as can be and a fine partner for Al until…

…she comes back, this time as Tino, a chubby corgi who becomes the object of affection for college student Maya (Howell-Baptiste). Their relationship continues on past graduation and after Maya gets married and starts a family. It continues until it’s Tino’s time to leave and he comes back as…

Buddy, a lovable St. Bernard who ends up chained in the front yard of a dilapidated shack, ignored and neglected and occasionally abused, wondering what it all means until at last he finds a way to someplace familiar…someone who he remembers (Quaid).

Hallström has never shied away from sentiment and this might be the most sentimental of all his films. It’s based on a book by W. Bruce Cameron and while there are some differences in plot line, it is essentially the same where it matters. The subject matter is essentially a dog wondering what the point of it all is; what is his/her purpose in life and what is it about buttholes that is so dang appealing?

Of course this is really about the place of all of us in the universe, not just dogs. Do we just live and then die? It’s heady stuff for a family film and why the Judeo-Christian tradition of heaven and hell is largely ignored here, the film does suggest that our place in the universe is largely determined by how much we love. Dogs are a metaphor in that regard because after all, who is more loving than man’s best friend?

Some might be aware of the video that went viral just before the film that was released that showed one of the dogs – the one who plays Ellie – apparently being forced into the water and being submerged. It should be said that while PETA and other animal rights groups made a big deal out of it, as it turns out the video was doctored and CGI was used of the dog in the water. There’s no doubt that the film crew did have a reluctant dog that should not have been forced into the water (it had more to do with the position of where they were filming the stunt rather than the stunt itself which the dog performed on other occasions without incident) but there was no abuse going on and Hercules, the stunt dog in question, is alive and well. It’s another case of people manipulating truth to suit their own agendas.

The performances here are adequate. You know the old showbiz adage of working with animals and children – it applies here. The best performances tend to come courtesy of those with four paws. That’s not in any way denigrating the two-legged actors here; Quaid is fine as always and Apa looks to be an Elar Coltrane in the making. The focus is on the dogs here and so the humans tend to be more background than anything.

Some movies are tailor-made for critics and others are not; this falls in the latter category. For the most part critics don’t like emotionally manipulative films and this one is certainly that. Yes, the movie is rife with clichés and that’s a problem but I don’t think that kids are all that picky about such things. There are at least two or three places where tears were flowing down my cheeks without shame. As catharsis goes you won’t get better than what I got here in most any film.

REASONS TO GO: Dog lovers will be absolutely charmed. The film examines some pretty deep questions in a non-lofty manner. There’s a Middle American sensibility here.
REASONS TO STAY: Those who don’t like having their emotions manipulated won’t like this at all.
FAMILY VALUES: Children and sensitive sorts (particularly about animals) may have a hard time with the peril several dogs (and the family) are put into and may be unable to handle the passing of various dogs in the film.
TRIVIAL PURSUIT: Bradley Cooper was originally slated to voice the various dogs in the movie but the scheduling couldn’t be worked out so Josh Gad was hired instead. Also, the bulk of the movie was filmed in Winnipeg.
CRITICAL MASS: As of 3/21/17: Rotten Tomatoes: 33% positive reviews. Metacritic: 43/100.
COMPARISON SHOPPING: Old Yeller
FINAL RATING: 8/10
NEXT: Death Race 2050