In Hollywood’s seemingly unceasing attempt to grab the newest Harry Potter, Bella Swan or Katniss Everdeen from a Young Adult novel series, they have moved on to their latest attempt with a cemetery full of potential candidates who didn’t make any sort of box office impact behind them. So will this enter that final resting place of dismal cinematic failures or will it be the next license for the studio to print money?

Master Gregory (Bridges) is the last of a once-vaunted but now nearly extinct order of Knights, the Knights of the Falcon – more popularly known as Spooks. That’s because this particular order hunted the supernatural, witches and dragons and such. In order to be effective in such a venture, they are all made up of the seventh sons of seventh sons, which makes them stronger than ordinary humans as well as more sensitive to magic and wizardry.

With his most recent apprentice (Harrington) indisposed, Master Gregory needs to find one in a hurry. That’s because one of his most powerful foes, Mother Malkin (Moore), a particularly powerful and malevolent witch, has escaped her entombment in a mountain and becomes more powerful by the moment with the approach of a once-in-a-century Blood Moon. She has the means to perform a ritual that will allow her to be all-powerful and to strike down Gregory which will allow the witches of the land to rule with impunity.

Gregory seeks Tom Ward (Barnes), an honest hard-working sort whose mother (Williams) seems to know more about what he’s in for than she’s saying. Gregory doesn’t have time to train Tom properly but he’ll just have to learn on the job; Malkin is gathering her forces including her right-hand witch Lizzie (Traue), master assassin Radu (Hounsou) and were-cheetah Sarikin (McClure). There’s also young Alice (Vikander) who Tom becomes sweet on but she’s actually Lizzie’s daughter, which complicates things.

All will come to a head in the witch’s castle high in a forbidden and desolate mountain range where a sacrifice needs to be made for the witch to become all-powerful. With the world at stake, can Gregory the aged knight triumph with an untested apprentice at his side?

Like many of the Young Adult fantasies to come our way in recent years, there is a heavy reliance on CG creatures which here have a kind of Ray Harryhausen-like aesthetic, only without the jerky movement of stop motion. One definitely has to give Bodrov, who wowed Russian and American audiences with the epic sweeping Mongol back in 2007, props for the respect.

Unfortunately, he has a very weak script to work with, one that was evidently written by Captain BeenThereDoneThat. We get an untested young protagonist who seems destined to fail, despite trying his hardest time after time but when a significant event occurs, he finds the power within himself and turns out to be even more powerful than anyone ever imagined. Most of those who litter the Cemetery of Young Adult Fantasy Would-Be Franchises That Failed have very similar storylines.

Sadly, this doesn’t have a Jennifer Lawrence or a Daniel Radcliffe either. Ben Barnes is an attractive young actor and he’s certainly got the looks that you need to pull in the hormonal teen girl crowd, but he’s got about as much charisma as his character name implies. Not to knock Barnes who shows moments of talent, but this kind of part requires charisma of a once-in-a-blue-moon sort. Barnes does his best and makes a likable lead, but not a messianic one.

Bridges and Moore, both familiar with Oscar (and in Moore’s case, likely to become even more familiar shortly) get to chew the scenery and they have at it with abandon. In Moore’s case, she becomes a sexy femme fatale who has been wronged and who has seen her people persecuted. If only the writers had chosen to explore that aspect of it more and make Mother Malkin less of a black hat and more of a tragic villain, this might have been a far different – and far better – movie.

Bridges mumbles and slurs his speech like a drunkard (which, to be fair, Master Gregory is) which wouldn’t be a problem except that he’s donned a similar affectation in his last four films. His Van Dyke beard looks a bit anachronistic considering this is supposed to be set during a medieval period but I can overlook that. There’s just little chemistry between him and Barnes so there’s a distance between the two characters that belies the fatherly affection that Gregory displays later in the film.

Part of the problem is that for a Young Adult series to succeed cinematically, it has to appeal to an audience beyond the target. In other words, Old Adults have to find something to latch onto as well, thus the casting of Bridges and Moore. However, the lead character needs to be charismatic and memorable and Barnes simply has not shown that he has that kind of screen presence, not as Prince Caspian and not as Tom Ward. Not yet anyway.

The attempts at humor mostly revolve around Gregory’s drunkenness leading me to think that this is a movie that takes itself way too seriously. While the supporting crew – in particular Hounsou, Williams and Vikander – are satisfactory, Moore and Bridges are both fine actors having a fine time with Barnes trying to and falling a little short. This isn’t a bad film, you understand – there have been far worse in this genre – but it’s just fairly ordinary entertainment, making this a likely candidate for a headstone in the Cemetery of Young Adult Fantasy Would-Be Franchises That Failed.

REASONS TO GO: Some nice monster effects. Julianne Moore and Jeff Bridges. Some decent support.
REASONS TO STAY: Humorless. Clunky. Predictable.
FAMILY VALUES: Plenty of swords and sorcery violence, some frightening images of monsters and mayhem and some brief foul language.
TRIVIAL PURSUIT: Originally to have been released in early 2014 by Warner Brothers, when Legendary’s distribution contract with that studio expired and a new one signed with Universal, this was one of the movies whose release date was delayed as Universal took over distribution.
CRITICAL MASS: As of 2/19/15: Rotten Tomatoes: 10% positive reviews. Metacritic: 31/100.
COMPARISON SHOPPING: The Seeker: The Dark is Rising
FINAL RATING: 5/10
NEXT: Harvey 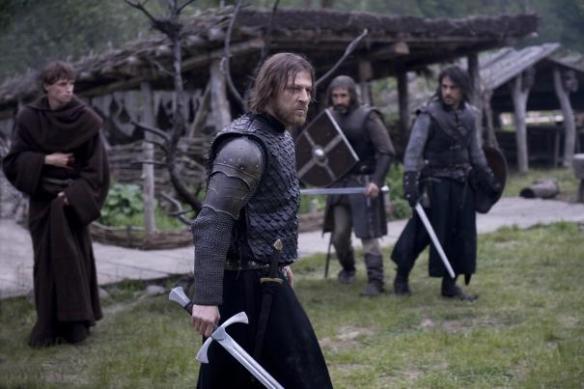 Back in the Dark Ages, the bubonic plague must have seemed like the end of the world. A pandemic that seemed to spare nobody, there was only rudimentary medical science and literally no protection against its ravages. Entire villages and even districts were wiped out by it.

So when a village seemed to be emerging unscathed from the horrors of the plague, the Church was suspicious. Witchcraft must be involved. Ulrich (Bean), a no-nonsense knight if ever there was one, is dispatched to the town to discover the truth and if necessary, put a stop to it. He enlists Osmund (Redmayne), a monk who knows the area well.

Osmund is pious but no saint. His girlfriend (Nixon) has been sent ahead into the forest to escape the plague. Osmund had plans to meet her there before being drafted. He joins (albeit reluctantly) Ulrich’s troop which includes a gleeful torturer (Nyman), a grim warrior (Lynch) and a mute killer (Gernandt). The group has issues, including being forced to strike down one of their own (Ballard) who is stricken by the plague, as well as having to take on bandits.

Eventually they reach the village which is seemingly controlled by two individuals – Hob (McInnerny) and Langiva (van Houten). During dinner, the me are drugged and put into a water-filled cage in the swamp while Osmund is given a horrible decision regarding his girlfriend whom he’d feared was dead. And the fears of the Church may not be entirely unfounded when it seems that there is a necromancer in the village who is powerful enough to raise the dead…

Smith is best known in this country for Severance but has actually directed several nifty little horror films in Britain. He is known for some fairly gritty films, but this might be the grittiest. This is not a Sword in the Stone England where everything is clean and healthy but what it really was like; foul, filthy and full of pestilence.

Good thing he’s got Sean Bean. Bean, who has of late made his medieval mark on Lord of the Rings: The Fellowship of the Ring and the first season of Game of Thrones on HBO is just as great here. He is strong, a great fighter, an inspiring leader but not without faults. His belief in the Church is staunch and unwavering but his unquestioning faith leads him to do acts that are most certainly unholy.

Redmayne is perfectly suited for the role of the pious Osmund. Osmund is terribly conflicted; on the one hand there are the vows to the church but on the other his forbidden love. Redmayne captures this division nicely and Osmund’s terrible dilemma is made very relatable. Van Houten, one of the best actresses in the Netherlands (if you haven’t seen Black Book by all means go out and rent it) plays the femme fatale to the hilt, and gives Langiva a very sensuous edge. The veteran character actor McInnerny also has a deliciously bad side to him.

The two sides – the Church and the pagans – don’t distinguish themselves here which makes it tough to have a rooting interest (it’s Osmund by default). That makes for a pretty grim fairy tale and that can get taken to extremes. The battle scenes are pretty violent and there’s nothing clean about them. There are no Errol Flynn acrobatics, no Lord of the Rings legerdemain, just a bunch of guys hacking away at each other with pointy things which was pretty much what medieval warfare was all about.

You may wonder what point there is to the movie with the ending which is, like the rest of the movie, pretty much a downer. I’m not sure you really need to look for one. This is a pretty strong movie that has overtones of horror, action and fantasy. However, don’t look here if you’re looking for the feel-good movie of the year. Then again, if you’re looking in the feel-good movie of the year it’s unlikely you’d be in the horror section anyway.

WHY RENT THIS: Spot-on re-creation of medieval England. Strong performances by Bean, Redmayne and van Houten.

WHY RENT SOMETHING ELSE: Occasionally overly brutal in the violence. Ending seems a bit pointless. Might be a bit too unrelentingly grim for some.

FAMILY VALUES: The violence can be pretty intense in places. There are also a few bad words scattered about.

TRIVIAL PURSUIT: Rupert Friend was originally cast as Osmund but was eventually replaced by Redmayne.

NOTABLE HOME VIDEO EXTRAS: There is some behind-the-scenes footage (separate from the standard making-of featurette) and some interviews with the filmmakers.

BOX OFFICE PERFORMANCE: $265,318 on an unreported production budget; I think it unlikely that the film was profitable.