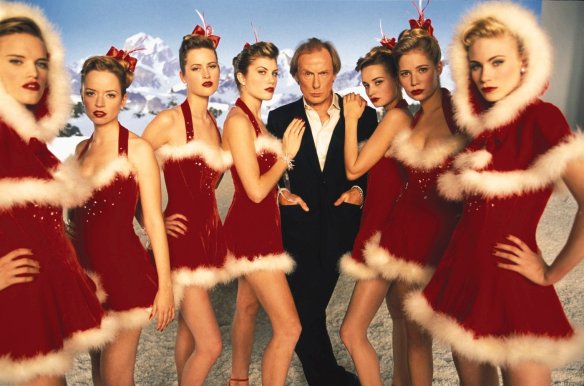 Is it love actually or lust actually?

Our world can be a hard, cruel place. We are buffeted on all sides by cruelty and meanness. Sometimes the only thing that keeps us sane in this world is the love of another, but that seems to be in short supply in these hard times. However, if you look carefully enough, you may find that love, actually, is all around us.

Billy Mack (Nighy), a fading rock and roll legend, tries to kickstart a comeback with a Christmas version of one of his hits as shepherded by his long-suffering manager Joe (Fisher). The new Prime Minister (Grant) falls for Natalie (McCutcheon), a plucky member of his staff. Jamie Bennett (Firth), a writer, mends his broken heart in France while cared for by a Portugese housekeeper named Aurelia (Moniz); the two begin to develop a deep fondness for one another despite the language barrier.

Daniel (Neeson) grieves for his late wife while his son Sam (Sangster) pines for a schoolmate. His friend Karen (Thompson) – who is also the Prime Minister’s sister – prepares for a school Christmas pageant. Her husband Henry (Rickman) runs a graphic design business, where Sarah (Linney), an American employee, yearns for Karl (Santoro), an enigmatic designer while Henry struggles with infidelity with an aggressive receptionist.

Colin (Marshall), an upbeat courier, gives up on finding the right woman in the UK and prepares to immigrate to the United States. Newlyweds Peter (Ejiofor) and Juliet (Knightley) have their lives complicated somewhat by Peter’s best friend John (Lincoln) who has a deep crush on Juliet, one that he would never act on. All of these stories intertwine an  intersect in London at Christmastime, perhaps one of the most magical places on Earth.

First of all, let me get this out of the way – this is one of my all-time favorite movies. It’s an astonishing piece of work, considering this is Richard Curtis’ first feature as a director (he had previously written a number of terrific movies, including Four Weddings and a Funeral). Here, he skillfully interweaves the stories among one another, linking some together directly and others indirectly, creating a viable whole giving none of them short shrift; it’s quite the tightrope walking act, and it is so rarely done well that when it is it must be applauded just on that basis alone.

I wrestled with using this as part of my Holly and the Quill series of Christmas movies, but eventually decided this isn’t a Christmas movie so much as a movie set at Christmastime. It is about love and could easily be set any time of the year. However I admit the Christmas setting adds to the overall warmth of the film.

This is a movie I watch often, usually with Da Queen and we always enjoy it, even after many viewings. We own the soundtrack, which is one of the better ones in any movie in the last ten years. In fact, this is one of my favorite movies of all time – but I’ve said that already. If you’re looking for a movie to snuggle up with your honey to this Valentine’s Day, this should be at the top of your list.

WHY RENT THIS: All of the vignettes work; there aren’t any weak moments or characters. The movie is sexy and funny and nearly everyone gets enough screen time to sufficiently develop their characters.

WHY RENT SOMETHING ELSE: Maybe it’s too English for you or you just don’t like romantic comedies.

FAMILY VALUES: There are some sexuality, a little bit of nudity and a fair amount of bad language.

TRIVIAL PURSUIT: The parts of the dads were initially offered to – and rejected by – Samuel L. Jackson and George Lopez who discussed the matter on Lopez’ talk show.

NOTABLE DVD EXTRAS: There are a couple of music videos here, as well as a featurette in which Curtis discusses the movie’s music.

BOX OFFICE PERFORMANCE: $246.9M on a $40M production budget; the movie was a blockbuster.