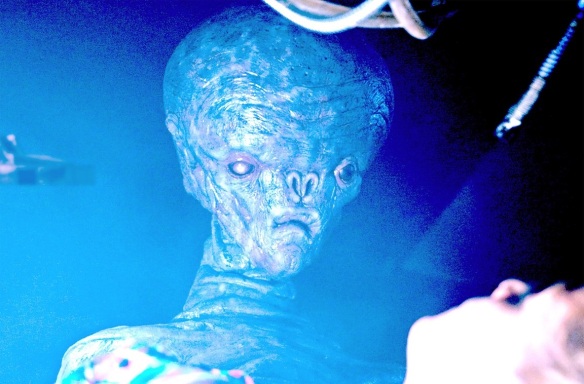 Why is it that aliens always get the pretty girls?

Sometimes, a filmmaker’s reach exceeds their grasp. That’s just the way things go sometimes; someone comes up with a good idea but doesn’t have the expertise or the budget (or both) to pull it off. As a critic, those are the most disappointing movies of all. You might think that we critics get off on ripping a bad movie a new one but speaking for myself, that’s simply not the case. Truthfully, I want every movie to be a home run. Sometimes they strike out swinging, though.

A support group for alien abduction victims meet to tell their tales of woe. The members are at turns terrified and hostile, paranoid and sympathetic. They’ve all been through hell and are trying to help one another make it through to the other side, but what could be waiting there might well be worse than what they’ve already been through.

This is told anthology-style with each abduction tale getting a different director, so there are tonal shifts from segment to segment. The segments include a photographer who gets abducted and probed while taking pictures in the desert, a group of young women who have a captive audience, a camping trip that turns deadly when an alien artifact is discovered, and a house in which a dog-sized alien stalks a babysitter.

Despite the presence of one of my all-time favorite Scream Queens in Brinke Stevens (who plays the mother of an abduction victim here), the acting is almost uniformly bad. The digital effects look like something you might see on an early PlayStation games, but much of the effects are practical and even though the aliens look a little bit on the rubbery side, the aliens are still nifty enough (some of them Gigeresque) to be enjoyable.

The trio of directors also wrote the film and they could use some work on their dialogue; much of it is written like nobody bothered to actually speak any of it out loud before giving it to the actors to read. It sounds thoroughly unconvincing and not at all the way people actually speak to each other.

I wanted to like Xenophobia a lot more than I did and I will have to confess that my score is probably a bit generous but I hate to thoroughly eviscerate a movie like this one. Clearly there  was some pride and passion put into the finished film but this was certainly a case where ambition overrode realism.

REASONS TO SEE: The aliens are fairly nifty in a B-Movie kind of way.
REASONS TO AVOID: The acting is subpar. The story is disjointed.
FAMILY VALUES: There is plenty of profanity as well as violence and gore.
TRIVIAL PURSUIT: Veteran Scream Queen Brinke Stevens originally got a Masters in Marine Biology and briefly worked as an environmental consultant for a nuclear power plant before venturing into modeling and acting.
BEYOND THE THEATER: Amazon, Fandango Now, iTunes, Vudu
CRITICAL MASS: As of 8/18/19: Rotten Tomatoes: No score yet: Metacritic: No score yet.
COMPARISON SHOPPING: Communion
FINAL RATING: 4/10
NEXT: Perception