Some of you might remember a Norwegian disaster movie called The Wave from back in 2015 in which a small town in the mouth of a fjord is hit by a massive wave that nearly levels the town. Well, one good Norwegian disaster deserves another, don’t you think?

Obsessive geologist Kristian Elkjord (Joner) is a broken man. After trying unsuccessfully to get government officials in the little resort town of Geiranger to take his warnings of an impending disaster seriously, 248 people ended up dead. Now two years later, he continues to live in Geiranger although his wife Idun (Torp) has left him and his college-aged son Sondre (Otrebro) has no time for him. Only his daughter Julia (Haagenrud-Sande) seems to have any gumption to spend time with her dad but he clearly suffers from raging PTSD and cuts short a planned visit because he simply can’t handle it.

]When a colleague dies mysteriously Kristian is piqued into looking into his studies. Consulting his friend’s raw data, he begins to suspect that his colleague was on to something – that Oslo is on the brink of suffering the repeat of a devastating quake at the turn of the 20th century and with dozens of glass skyscrapers dominating the graceful sideline it is a disaster (movie) waiting to happen. And when the family is put into jeopardy, it is Julia and not Sondre who puts them there. Fortunately, the couple only had two kids…

]Poor Kristian has become the Cassandra of Norway – nobody will listen to his dire warnings which of course all come true. After all, nobody wants to see a movie in which the lead scientist is taken seriously and his advice followed. But I’m pretty sure that nobody wants to see a movie in which a kid defies her parent’s orders to put herself – and eventually others – in danger either, but that’s what happens here. Kids are not known for acting calmly and intelligently in a crisis situation but there comes a time where I was hoping that Julia might be flattened by a crossbeam or something. Hope springs eternal.

]Joner does a good job of portraying Kristian’s precarious mental state. We know the geologist will act decisively and heroically in a crisis situation (because we’ve seen him do it before) but it’s good that an element of uncertainty is thrown in. Will the PTSD overcome his heroic impulses? Stay tuned.

As with The Wave, the special effects range from the solid to the spectacular. While the director preferred – either for budgetary reasons or personal preference but it doesn’t matter which – using practical effects wherever possible, the CGI when used is hella effective. There are also some fairly gruesome injuries/deaths in the film, one in particular which is of the type Hollywood films like to tease but never carry through. Here in The Quake you get to see it and there is a certain visceral satisfaction in it, even if the victim doesn’t particularly deserve their fate.

The story though is pretty much Disaster Movie 101 much like The Wave was. It follows the same formulaic steps and while those steps are accomplished competently, there isn’t much in the way of surprises here. Still, it’s fine entertainment if you don’t mind subtitles and bratty kids. If it doesn’t play anywhere near you during a limited theatrical run, it’s already available for streaming on most major sites.

REASONS TO GO: The special effects are very well done.
REASONS TO STAY: The plot is too formulaic and depends on children doing stupid things.
FAMILY VALUES: There is a whole lot of disaster imagery and destruction, some depiction of injuries and brief profanity.
TRIVIAL PURSUIT: Oslo did suffer an earthquake in 1904 that measured 5.4 on the Richter scale; seismologists have expressed concern that they are due for another even more devastating quake.
BEYOND THE THEATERS: Amazon, Fandango Now, Google Play, iTunes, Microsoft, Vudu, YouTube
CRITICAL MASS: As of 12/15/18: Rotten Tomatoes: 81% positive reviews. Metacritic: 68/100.
COMPARISON SHOPPING: Earthquake
FINAL RATING: 6.5/10
NEXT: Becoming Iconic: Jonathan Baker 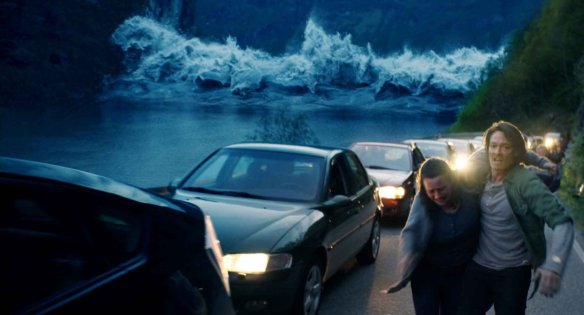 Norway’s fjords are lovely, but they are also a ticking time bomb. They are in a mountainous region, and when the set up is just right – as in the tiny tourist village of Geiranger which sits at the mouth of the fjord bearing it’s name – that time bomb can tick rather loudly. As the movie notes in a kind of prelude, rock slides from Ȃkneset Mountain back in 1905 impacted the river below, causing a gigantic wave 240 feet tall moving between two tall cliffs like a bullet through the barrel of a gun, a gun pointed right at Geiranger. Scientists are wary that similar circumstances will happen again.

For that reason, a monitoring station is set up there, and geologist Kristian (Joner) has been a part of the team that has kept an eye on the mountain. However, the lure of corporate money has gotten him and he is leaving the government-run station for the deep pockets of an oil company. His last day has arrived and he and his family – wife Idun (Torp) who works as a desk clerk at the town’s luxury hotel, disaffected teen Sondre (Oftebro) and cute-as-a-button 7-year-old daughter Julia (Haagenrud-Sande).

While station chief Arvid (Såheim) is none-too-happy to be down such a valuable member of the team, he nonetheless gives Kristian a nice send-off. However, readings that show the ground water disappearing suddenly in two sensors on the mountain send Kristian scrambling to examine the evidence, which is disturbing but not enough to have Arvid evacuate the town, especially at the height of tourist season.

Still, something about it bothers Kristian so when he’s just about to drive aboard the ferry, he whips a quick U-turn and heads back. While his suspicions still aren’t enough to get Arvid pushing the panic button, he has succeeded in stranding his family (Idun had been set to finish out the month at the hotel anyway) in the town. With the mountain rumbling, disaster movie fans know that the worst is about to happen. As is true with most disaster movies, who lives, who dies – and what is left of the town – is all up in the air.

Given the film’s small budget, the special effects are pretty impressive. Something with a budget north of $100 million might have made a more realistic looking wave (and it appeared that the filmmakers used practical effects whenever possible) but not much more realistic. When it comes bearing down on the audience, one wishes that the movie had been shot in 3D. That might have been one of those rare instances where the format would have made sense rather than being a gimmick inserted into the movie for the sole purpose of allowing theaters to upcharge the public for the privilege.

I had to feel badly for Oftebro, who plays Sondre. He plays a character who is about as disagreeable as you can get and will even irritate Millennials. Apparently, the writer doesn’t think very highly about teens; Sondre is grouchy, disrespectful, self-centered and prone to doing the wrong thing at exactly the wrong time. His actions get people killed and put his family in jeopardy; to be fair he does feel bad about it later but while he’s doing those things, you might be tempted to punch him right in the face.

Overall, I was a little bit disappointed in the movie; sure, the effects are better than I expected and the acting was solid, but there are so many disaster movie cliches and scenes that are literally ripped off from other movies such as The Abyss, Dante’s Peak, Jaws and The Impossible. Still, if you haven’t seen those movies and aren’t particularly familiar with the disaster genre, it will all be new to you.

So what this adds up to is a solidly entertaining European take on what has been up to now a genre dominated by American movies. Surprisingly, it is not essentially different than the American take on the genre. In a way, it is kind of comforting to know that some things are the same everywhere in the world – disaster movies apparently being one of them.

REASONS TO GO: Impressive but low-budget special effects. Joner is an effective and charismatic lead.
REASONS TO STAY: A lot of disaster movie cliches. You will want to punch Sondre in the throat.
FAMILY VALUES: Some graphic images of a tsunami disaster, and a few profanities.
TRIVIAL PURSUIT: Norway’s official entry for the 2016 Academy Awards Best Foreign Language film award; it didn’t make the final list of five however.
CRITICAL MASS: As of 3/15/16: Rotten Tomatoes: 80% positive reviews. Metacritic: 68/100.
COMPARISON SHOPPING: The Towering Inferno
FINAL RATING: 6.5/10
NEXT: Zootopia