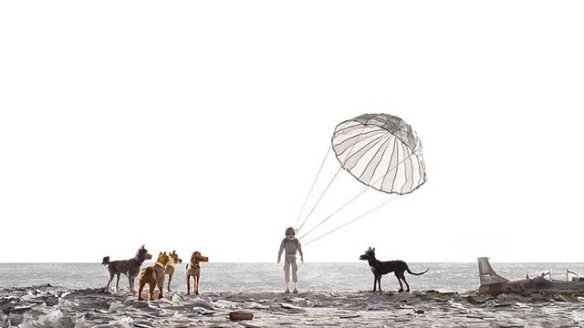 Some dogs and their boy.

Those who love the works of the quirky director will love this; those who are turned off by his oeuvre will not. The second stop-motion animated feature by Wes Anderson is so Wes Anderson.

In the future, the Japanese megalopolis of Megasaki has banished all dogs to an island formerly used as trash disposal. An intrepid young orphan boy (Rankin), who is also the mayor of Megasaki’s ward, flies to the island to locate his dog Spots (Schreiber). A pack of alpha dogs, including Chief (Cranston), Boss (Murray), King (Balaban), Duke (Goldblum) – a kind of four-legged TMZ – and Rex (Norton) along with the only female dog in the pack Nutmeg (Johansson) agree to help the boy find his friend. It doesn’t help that he speaks only Japanese while the Japanese dogs speak only English – or at least that’s how we perceive them. Meanwhile, back on the mainland, Tracy (Gerwig), a school reporter, discovers a terrible secret behind the cat-loving mayor’s (Nomura) proclamation.

The look of the film owes a lot to legendary Japanese animator Hayao Miyazaki and is consistently beautiful throughout, even on the industrial garbage heap that is Trash Island. The Oscar nomination it received earlier this year was no fluke even though it eventually lost out to Spider-Man: Into the Spiderverse. The dogs are exquisitely rendered and are genuinely hilarious. Anderson’s trademark deadpan sense of humor very much rules the day here; not everyone gets it or likes it. Bill Murray has made a career of it, including many of Anderson’s films but the two were made for each other.

This isn’t everybody’s cup of sake and I don’t think Anderson ever sets out to make a film that is. There are moments that are beautiful and others that are ugly, so young kids should be warned away due to the latter. There is a lot of Japanese cultural references here which will appeal to Japanophiles everywhere although SJW-types might mutter things about “cultural appropriation.” The bottom line here is the same as the top; those who love the works of the quirky director will love this; those who are turned off by his oeuvre will not.

REASONS TO SEE: The animation is brilliant. The sense of humor is droll, a welcome change.
REASONS TO AVOID: Guilty of occasionally being too quirky for its own good.
FAMILY VALUES: There are some images of violence and the thematic elements might not sit well with the very young.
TRIVIAL PURSUIT: This marked the first time in 14 years that a Wes Anderson film didn’t feature Jason Schwartzman in the cast (he did co-write the script).
BEYOND THE THEATER: Amazon, Apple TV, Fandango Now, Fios, Google Play, HBO Go,  Microsoft, Movies Anywhere, Redbox, Vudu, YouTube
CRITICAL MASS: As of 6/22/19: Rotten Tomatoes: 90% positive reviews: Metacritic: 82/100.
COMPARISON SHOPPING: The Fantastic Mr. Fox
FINAL RATING: 7.5/10
NEXT: Killbird