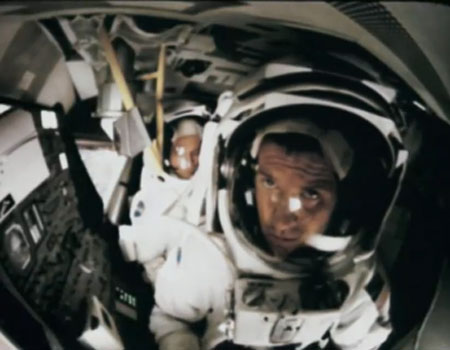 These astronauts discover to their shock that the moon really IS made of green cheese.

Once upon a time, traveling to the moon seemed like the ultimate adventure in human achievement. Then in 1969, we achieved it and it seemed like afterwards humanity did a collective ho-hum and we went on to other things, like toppling Latin American democracies. The moon landing program was curtailed after Apollo 17 in 1972.

But according to this film, there was one more mission in 1974 – one that landed on the South Pole of the moon (technically impossible according to the technology of the time), one that was made secret by the Department of Defense.

Astronauts Nate Walker (Owen) and Ben Anderson (Christie) along with Command Module pilot John Grey (Robbins) can’t even tell their families about their mission, which is top secret. They are tasked with positioning some listening devices on the surface of the moon that will help give early warning about missile launches from the then-Soviet Union.

However, the astronauts encounter something odd. Their communications are cutting out frequently because of an odd frequency which they think is being transmitted by the listening devices, although frankly that puzzles them because they shouldn’t be transmitting anything. They continue to do astronaut-like things – taking rock samples, driving the lunar rover around, and planting the flag.

However things take a decided turn for the strange. They discover a Russian landing vehicle in a nearby crater where they also discover the body of a cosmonaut who apparently was injured and died. Things get really weird when the astronauts try to take off and something slams into the lunar module, damaging it. Now they are in a race against time for survival – and they aren’t alone.

This is purported to be NASA footage from 1974 that was culled from hundreds of hours of footage uploaded to a bogus website (www.lunartruth.org) which the studio is marketing as actual footage. And yes, some of it is actual footage – from previous lunar missions, mixed in with footage shot in Vancouver.

This is Lopez-Gallego’s first English-language film after a couple of pretty nifty Spanish horror films. Like many Spanish directors, he has an eye for mood and a knack for increasing the tension nicely. There are plenty of startle scares here and quite frankly I cried out several times during the movie, something I very rarely do during horror movies. That’s money as far as I’m concerned.

Yeah, the whole found footage thing is getting a bit tired, but it is done cleverly here and great attention to detail is laid in, from shooting it so the horizon is low (as it is on the moon) to re-creating the lunar and command modules and shooting on 16mm film that is properly grainy and washed out, color-wise. All of these are effective.

The science here has been described as “preposterous” and quite frankly if you know that much about physics and engineering you’re going to be driven crazy, but then again that’s usually the case with most space-set movies. What it all boils down to is whether or not the movie is scary and as I’ve already stated, it is big time. Check your higher functions at the door and be prepared to have your primordial self pee its pants as your nightmares come to life on the multiplex screen.

REASONS TO GO: I’ve seen all sorts of horror films and most don’t scare me much; this one did.

REASONS TO STAY: The handheld cams are dizzy-making at times.

FAMILY VALUES: There are some nightmare-inducing scenes as well as some bad language.

TRIVIAL PURSUIT: In the movie, the actors walk normally on the lunar surface. In reality, astronauts had to shuffle their feet somewhat in order not to go leaping around the moon like gazelles because of the low gravity.

HOME OR THEATER: The lunar desolation should be seen on the big screen, but the 16mm cameras work on the home screen as well.

TOMORROW: Bringing Out the Dead