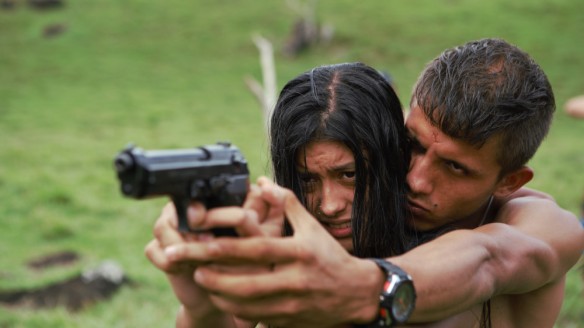 The gun lobby corrupts yet another innocent youth.

Revenge is one of those things that tend to take on their own lives apart from those who are out to achieve it. They shape lives, become obsessions and often cost more to the one taking revenge than on the one they are getting revenge from.

Paula (Jaramillo) is a college student majoring in photography. She spends most of her time hanging out with her friends, attending meetings of activist groups that are mainly all talk, and smoking way too much dope. Her father Jose Maria (Escobar) is where she gets her social activism from although he is wary; Medellin in Columbia is a rough place to live with violence around every corner. Still, he loves his daughter fiercely and from time to time gives her a lift home from school. That proves to be fatal as when opening the gate to his driveway while Paula is bending down in the front seat to make sure her camera bag has everything in it, a young man on a motorcycle guns down her father. Paula gets a glimpse of the killer’s face although he doesn’t see her.

The police prove to be unsurprisingly ineffective and corrupt, causing a great deal of frustration for Paula and her brother Santiago (Trujillo). Paula grows withdrawn, sullen while Santiago grows fearful for his sister who continues to go out with friends, although she is basically ignored. One evening, she catches the face of her father’s murderer in a nightclub and strikes up a conversation with him. His name is Jesus (Rodriguez) and even though he is drunk, he is clearly attracted to her.

Paula decides to take justice in her own hands, partnering with her dope dealer Gato (Cardenas) to buy herself a gun in order to do unto Jesus what he had done unto her father. However, that proves to be no easy task; stranger yet, she is beginning to see Jesus as a human being who in many ways is as much a victim of the violence and corruption in Medellin as her father was. In a somewhat surreal scene, he even teaches her how to shoot. Will she be able to complete her plan of revenge or will killing Jesus be too much for her?

This had the potential for being a very powerful movie on the nature of violence and how it pervades Colombian culture but Mora chose not to go that route. It also had the potential for being another crappy revenge thriller, but she chose not to go that route either. Rather, she chose to focus in on the relationship between Paula and Jesus and how it changed her…and how she changed Jesus. The thing that Paula expected the least is what happens – she starts to actually sympathize with Jesus but that pain of loss is still deep down and waiting for the opportunity to explode.

Most of the cast is non-professional which sometimes works out and sometimes doesn’t. Jaramillo is not adept at handling emotional scenes; when she cries for her father it doesn’t feel authentic at all. She’s pretty enough and she says her lines with conviction but she has a hard time getting across the emotional side of her character. Rodriguez on the other hand is a sizzling presence who captures your attention whenever he’s onscreen. Yes he’s a thug with a fatalistic view towards life; he’s fully aware that his life expectancy isn’t very long and yet he has the arrogance of machismo guiding his actions. He also is loving towards his family and towards the girl whom he is developing deep feelings for and might he persuaded to let in where nobody is allowed. The performance has an undercurrent of vulnerability that makes the charismatic thug on the surface all the more memorable and while his brooding thug is no Brando, there is enough there to believe he could become a big star.

There are a few instances of shaky cam abuse and from time to time Paula does things that defy rationality – the dumb teen syndrome which allows certain types of horror films to exist. This does feel like a very personal film to Mora (see Trivia below) and sometimes it can be a bit raw. Having not been to Medellin I can’t say if it accurately captures the reality of street life there but it feels authentic to a non-expert like myself.

The movie has a lot going for it – particularly the social and psychological aspects – although it doesn’t always fulfill its own promise. Still, Mora is a young director and she’ll only get better and this is good enough to recommend provisionally and certainly good enough to warrant keeping an eye out for future projects from the director as well as Rodriguez. If you want to catch them right now, you can order tickets here.

REASONS TO GO: The progression of Paula’s perceptual change is fascinating to watch.
REASONS TO STAY: Jaramillo isn’t always convincing from an emotional standpoint.
FAMILY VALUES: There is a lot of drug use (mainly marijuana smoking), plenty of violence (some of which is graphic) and more than a little profanity.
TRIVIAL PURSUIT: Laura Mora Ortega based some of the events in the film on her own life; her father, also a teacher, was gunned down by a hitman in front of her. She later met the man who murdered her father although not in the way depicted in the film.
CRITICAL MASS: As of 3/12/18: Rotten Tomatoes: No score yet. Metacritic: No score yet.
COMPARISON SHOPPING: Sleeping With the Enemy
FINAL RATING: 6/10
NEXT: Lucky