Not everyone sees things the same way. For example, we can all look at a painting by Salvador Dali. We can be mesmerized by the image. We can be repulsed by the subject matter. But we will all see it and interpret it through our own lens, through our own experiences. And what we ourselves see isn’t necessarily what everyone else sees.

Debora (Garofalo) is a tattoo artist who is currently single, although her roommate – who is deliriously in love – wants to set her up with a friend, who is quite taken with her. Debora is less enthusiastic, but is open to the idea. The four of them settle down to watch a bootlegged version of the hit fantasy series – all of them being proud flag-waving nerds – Gain of Clones. That’s when things go weird. All their broadcast media – the TV, the radio, their phones, go haywire. Anything with a display is broadcasting strange images. One of them enters a trance-like state. Then as abruptly as it began, they regain their normal signals.

But nothing is normal. Giant cats prowl the rooftops. Giant snakes are eating people. A giant witch terrorizes the town. It’s an alien invasion, and the one person who can stop it might be Debora. If she wants to, that is.

The plot – such as it is – is deceptively simple, but I’m leaving a lot out; not just because it would spoil the viewing of it (although it might) but mainly because it doesn’t make a whole lot of sense when you put it down on paper…err, a digital screen. But the animation is definitely simplistic, a throwback to Nicktoons and Adult Swim animation. This isn’t anime by any stretch of the imagination.

But speaking of imagination, there’s plenty of that here. This movie is so far out of the box that the box has ceased to be a reference point. This movie just is and that’s really all it needs to be. There’s no real explaining it; it has to be experienced.

But that said, this isn’t for everybody. In fact, I’d venture to say it’s for a narrow range of film buffs who grew up in the 90s, have a certain simpatico for sci-fi and fantasy, don’t mind a little romance, and prefer their movies to be as completely whacko as they possibly can be – the less mainstream, the better. If 2020 had been a normal year, this might have done some serious damage on the festival circuit and perhaps it still will, but for those Jonesing for a virtual film festival of their own to curate might do well to add this to their list. But don’t say I didn’t warn you about the weird part.

REASONS TO SEE: Studiously weird, but imaginative.
REASONS TO AVOID: The story jumps around a bit.
FAMILY VALUES: There is violence, sexual references and some profanity.
TRIVIAL PURSUIT: In the original Spanish-language version, acclaimed Argentine actress Sofia Gala Castiglione voices the role of Debora.
BEYOND THE THEATERS: Amazon, DirecTV, Fandango Now, MUBI, Vimeo, Vudu
CRITICAL MASS: As of 3/19/21: Rotten Tomatoes: No score yet; Metacritic: >em>No score yet.
COMPARISON SHOPPING: Extraterrestrial
FINAL RATING: 6/10
NEXT: The Courier

Jason Isaacs is getting warmer.

It must suck to be a volcanologist in the movies. Nobody ever believes you that the volcano is about to erupt, it’s all just “ooh” and “aah” at the beautiful smoking cone, but then comes the blast, the screaming, and the dying.

The daughter of two volcanologist’s, Meng Li as a child (Rogers) was on Tianhuo island when the volcano erupted. When her father (Shi) was unable to save her mother (Rietveld) from the pyroclastic cloud that broiled her alive, the two became estranged. Now an adult, Meng (Quinlivan) works on the same island as a scientific advisor to Jack Harris (Isaacs), who has built a theme park resort around the volcano. With a high-tech monorail and a luxurious elevator that descends into the caldera, it’s certain to be the in spot for wealthy type A sorts the world over. To keep the guests safe, Meng has installed a fancy new high tech imaging system to monitor the volcano. She’s concerned over some of the initial readings Even more concerned is her dad, who takes one look at the data and hightails it out to the island to get his stubborn, angry daughter to flee the island before (heavy pause here) it’s too late!!!

Does anyone reading this not believe it’s already too late? If so, you need to watch more movies, my friend. The mountain blows it’s top in a spectacular shower of CGI lava and CGI pumice raining down from the crater. Because the director is long-time action veteran Simon West, we get some well-staged set pieces, like a daring transfer of passengers from one speeding monorail car to another.Because the film is Chinese, we also get some incomprehensible holes in logic and lapses in science. For example, a pair of young lovers (Dou and An) go for a swim in a beautiful tropical grotto as the mountain erupts. Suddenly, their idyllic swim – during which he proposes to her – is interrupted by lava flowing into the pool. They frantically swim for their lives, foregoing the need to breathe. Of course, they shouldn’t have needed to swim at all – the lava flowing into the pool should have parbroiled them. Don’t believe me? Drop a handful of red-hot coals into a small saucepan of room temperature water and see what happens. And that’s not even molten rock.

The movie suffers from severely underwritten characters, so it is hard to end up caring about which ones survive and which ones meet a horrific end. Still, most disaster movies aren’t exactly character studies, to be fair. However, one would like the special effects to be spectacular, and at times, they are. But they are dreadfully uneven; some of the green screen stuff looks like it was rushed and not given a whole lot of effort. The underwater sequence is cheesy enough to make Esther Williams blush.

Basically, what we have here is Jurassic World meets Dante’s Peak – which oddly enough, is a pretty accurate description of the first half of Jurassic World: Fallen Kingdom – and if you ask me, that’s not necessarily a bad combination to have. The movie has enough entertainment value that most audiences are likely to forgive the bad science, bland characters and disaster film cliché-loaded plot. Some will look at this and snicker at the Chinese attempts to make a comparable big-budget disaster film. They certainly aren’t producing elite-level films in that regard, but if you look at their dramas and some of their genre films, they aren’t that far off. Give the Chinese film industry another decade or two and they are going to make movies that will put Hollywood to shame. And that’s not a bad thing either. 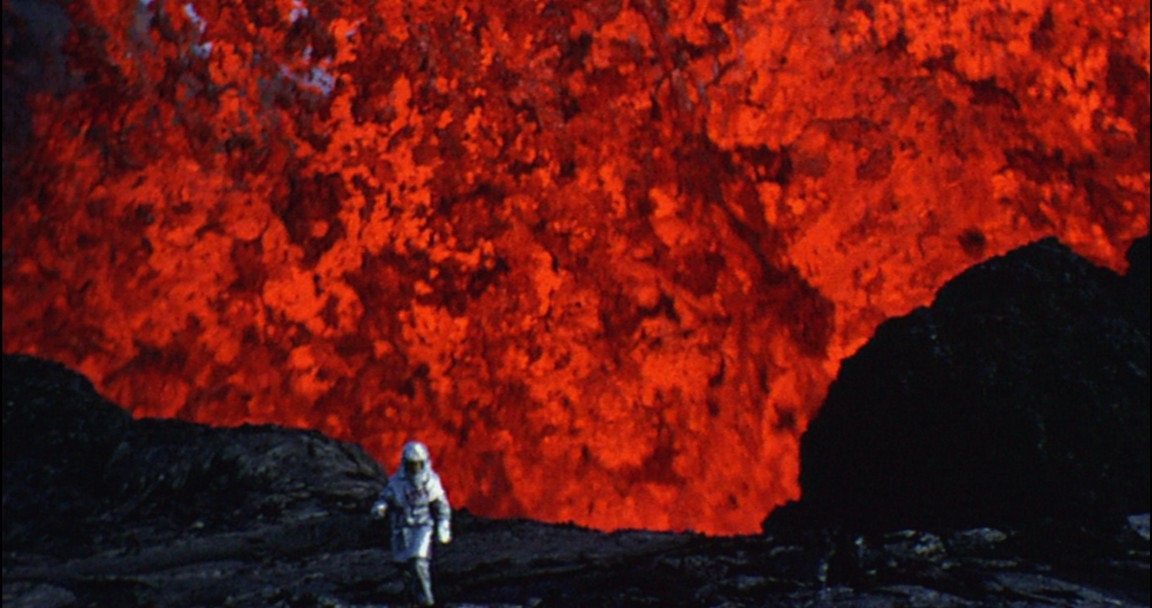 Volcanology is a hot job these days.

There are few spectacles of nature more awe-inspiring and more terrifying than a volcanic eruption. They are primordial events, part of the continuing growth of our planet. Without them, our planet would be desolate. They are part of what enables life on Earth. It is a powerful reminder of how the Earth created; there are those who believe that volcanoes are the fingers of God.

Studying volcanoes is dangerous work, but it is necessary to understand the forces that shape our world. Volcanologist Clive Oppenheimer met filmmaker Herzog nine years ago when Herzog was filming Encounters at the End of the World and Oppenheimer was studying Antarctic volcanic activity for Cambridge where he continues to work. The two became friends and the partnership between them is well-defined; Oppenheimer acts as an interlocutor as he explains the concepts and science behind volcanology as well as the history of volcanic eruptions and their effect on primitive and modern cultures.

The search takes Herzog and Oppenheimer from the Vanuatu Islands to Indonesia to Iceland and eventually, to North Korea of all places where the communist regime and the dictators who rule it have created a kind of mythology behind Mount Paektu that ties the power of Kim Il-Sung and his successors to the mighty volcano. It is in many ways the most disturbing segment as well as the most amusing.

Throughout there is amazing video footage (some of it shot with drones) of erupting volcanoes; pyroclastic clouds tumble down mountainsides, destroying anything and everything in their path, including the volcanologists who are studying them. This was the fate of the French husband-wife team of Maurice and Katia Krafft who got some of the most amazing footage of magma and lava generally by getting much closer than most of their colleagues would dare to go.

But this isn’t just a film about erupting volcanoes. That’s not Herzog’s style. He’s more of a Michael Moore kind of filmmaker; he inserts himself into the story and acts in  many ways as our avatar. This is not just learning about volcanoes, it’s about Herzog learning about volcanoes and their cultural significance. It’s about learning how the violence of volcanic eruption is one of the cornerstones of life. It is also about obsession as nearly all of Herzog’s films are; the volcanologists are obsessive about their field of study, risking life and limb for it and sometimes, dying for it. Herzog identifies with these people; nearly all of his films both narrative and documentary has some sort of obsession at its center. One can hardly blame him; obsessives make for compelling subjects.

I have to admit that I found more majesty in the images than in the context. While generally I concur that ideas are more important than visuals, here the visuals are so awe-inspiring as to render the ideas almost meaningless. When confronted by a river of flowing molten rock, of plumes of superheated gasses roaring down a hill at hundreds of miles an hour, raging at more than 1700 degrees Fahrenheit, everything else shrinks in significance. Volcanoes are living examples of the power of creation. It just doesn’t get any more primal than that.

REASONS TO GO: The images of volcanic eruption are absolutely breathtaking. Clearly there is an affection and reverence for those who study volcanoes as well as the volcanoes themselves.
REASONS TO STAY: Herzog has a tendency to jump around subject matter a little bit.
FAMILY VALUES:  There are adult themes and some graphic images of volcanic eruptions.
TRIVIAL PURSUIT:  This is the third film about volcanoes that Herzog has directed.- Salt and Fire and La Soufriere.
BEYOND THE THEATER: Netflix
CRITICAL MASS: As of 12/27/16: Rotten Tomatoes: 90% positive reviews. Metacritic: 76/100.
COMPARISON SHOPPING: Dante’s Peak
FINAL RATING: 7/10
NEXT: Jackie