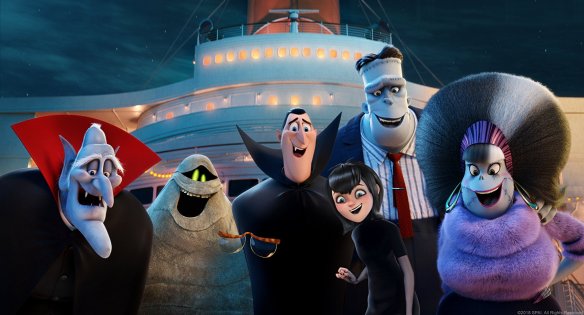 After centuries of providing the perfect vacation for the monster community, Dracula is in need of one himself so he packs up his family and heads out on a cruise. As happens on cruises, he finds a romantic connection but as happens to Dracula this is not a connection that may necessarily be what it seems.

See the trailer and video featurettes here.
For more on the movie this is the website.
Release Formats: Standard, 3D
Genre:  Animated Feature
Now Playing: Wide Release
Rating: PG (for some action and rude humor)

(Bleecker Street) Thomasin McKenzie, Ben Foster, Jeff Rifflard, Michael Draper. A father and his daughter live off the grid in an urban park in Portland but after they are discovered and brought into a more traditional existence, the dad is anxious to return to his previous way of life. The trouble is, his daughter may no longer be quite as willing to come with him.

(Universal) Dwayne Johnson, Neve Campbell, Pablo Schreiber, Noah Taylor. A wounded veteran, who lost a leg in combat duty and now works as a security specialist, is hired to oversee security at a new technologically advanced skyscraper in Hong Kong. He moves his family to the swanky apartments, but when terrorists set fire to the building, he will have to push himself beyond his limits to save them.

(Sony International) Diljit Dosangh, Tapsee Pannu, Angad Bedi, Danish Husain. This is the incredible but true story of Indian field hockey superstar Sandeep Singh who is paralyzed in a freak accident while traveling to the World Cup for the sport. Determined to not only walk again but play competitive field hockey and be a difference maker, all of which his doctors think is impossible.

Sorry to Bother You

(Annapurna) Lakeith Stanfield, Tessa Thompson, Omari Hardwick, Terry Crews. In the Oakland of an alternate reality, a young telemarketer discovers a magical key to career success which ends up propelling him into a macabre universe he could not have imagined. This Boots Riley-directed fantasy has been getting a strong word of mouth.

See the trailer, video featurettes and a clip here.
For more on the movie this is the website
Release Formats: Standard
Genre: Comedy
Now Playing: Wide Release
Rating: R (for pervasive language, some strong sexual content, graphic nudity, and drug use)