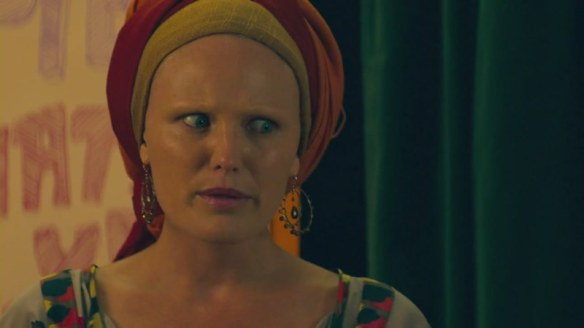 There comes a point in all of our lives when we turn from twenty-somethings to thirty-somethings. It’s a bit of a milestone and in many ways it’s not that easy. For most of us, it’s a milestone from which we graduate from being “young people” to being “adults.”

For Sam (Radnor) and his friends, that change isn’t coming easily. Most of Sam’s circle are aspiring artists; none have really accomplished much in the arts to be honest. Sam has written a novel but not gotten it published although, with a title like The Other Great Thing About Vinyl there’s perhaps a clue why not. Sam is in fact on his way to see a publisher when he spies a kid hanging around the subway.

Sam senses there’s something wrong and tries to help. It turns out the kid, Rasheen (Algieri) was left there. Sam tries to deliver him to the authorities but when that doesn’t work out, he decides that Rasheen can stay with him until Sam can figure something out. Sam is apparently not the sharpest blade in the shed.

He has plenty of competition for that though. Mary Catherine (Kazan), who is Sam’s cousin,  is also a painter in the village – no, she doesn’t paint houses – who loves New York, even though for what she makes she can barely afford it. In fact, she probably wouldn’t be able to were it not for her filmmaker boyfriend Charlie (Schreiber) who has at least been working regularly; now he has received a job offer in Los Angeles, a lucrative one. He wants to go; she wants to stay, showing the kind of L.A. Hate-on only a New Yorker could generate, as well as that insular feeling that the Apple is the only city in the world that those Manhattan dwellers sometimes get. Their relationship has reached a crossroads and could go down either road – separately or together.

Annie (Akerman) has Alopecia, a disease that causes hair loss – in Annie’s case, complete hair loss. She wears an African head scarf to disguise this. She wonders if she can ever be truly loved – but then her taste in men is disastrous. Most of the men she chooses are borderline abusive and are only interested in one part of her body (and it isn’t her hair or lack thereof). A lawyer in her office whom she refers to as Sam #2 (Hale) is sweet on her, but his attempts at courtship are awkward and occasionally creepy. Still, he seems to be a nice enough guy but he’s simply not cool enough for her.

In the meantime, Sam #1 has become fixated on a waitress/barmaid named Mississippi (Mara) who is also a singer and is working hard to break into the music business but until then is waiting tables. She brings much stability into his life, although when she finds out the truth about Rasheen (whom she assumed was Sam’s biological progeny) becomes rightfully concerned as to whether Sam is the right guy for her.

Radnor also wrote and directed this, his first feature film. He is best known for playing Ted on the CBS sitcom “How I Met Your Mother.” In some ways, the characters here are sitcom-like, more caricature than character. Think of it as a hipster sitcom.

Although this is essentially an ensemble film, these are not interweaving stories but part of the same one. Akerman is a fine actress who sometimes gets parts that showcase her abilities; this isn’t one of them. Nevertheless, she elevates it, turning the role of Annie who has elements of self-pity woven into her personality into less of a whiner and more into a compelling character you want to know better. That’s a testament to her talents, and her performance is far and away the best thing going for the film.

Elsewhere, the performances range from marginally okay to satisfactory. Nobody disgraces themselves here but other than Akerman nobody else rises above either. For the most part this is pleasant but unmemorable. The title refers to something an Indian cabbie tells Annie – I’m paraphrasing, but essentially that it is necessary to go about life being grateful for the things that make you happy, and to ask the universe for more of those things. It gives the film a kind of optimism that is not that unusual in indie films these days (you want pessimism, see a 70s film).

However, also the norm in indie films is a focus on a hip New York lifestyle that as depicted the people involved couldn’t possibly afford to live. Sam, for example, has no apparent income and yet lives in a nice apartment in the Village. While not science fiction per se, it does enter that fantasyland of indie films that we have just learned to accept as part of the reality of movies – like the characters always get a parking spot in front of the place they want to go, for example. Just accept and move on.

The movie is charming enough to be palatable while you’re watching it, but won’t stick around in your memory much more than it takes to find something else to do. The film’s message on finding the things that truly make you happy isn’t a particularly revolutionary one nor is it told in a particularly revolutionary manner. It’s just a decent first feature for someone who shows enough promise that I look forward to seeing where he goes from here as a filmmaker and actor.

WHY RENT THIS: Akerman elevates her material. Some moments of insight here and there.

WHY RENT SOMETHING ELSE: A little heavy on the indie cliché. A bit unfocused in places.

FAMILY VALUES: There is a good deal of bad language here.

TRIVIAL PURSUIT: Radnor wrote the film while working on the first and second seasons of “How I Met Your Mother.” He then spent the next two years acquiring financing, writing revisions and casting actors in their roles before shooting in July 2009, just three months (including six weeks of pre-production) after getting the financial backing.

BOX OFFICE PERFORMANCE: $216,110 on an unreported production budget; the film broke even at best (but probably didn’t).

NEXT: Men in Black III