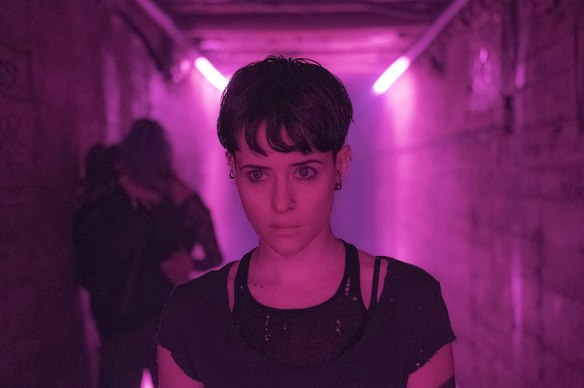 Lisabeth is not someone you want to cross.

One of the most intriguing literary characters to come along in the last fifteen years is Lisbeth Salander, the avenging angel/hacker/righter of wrongs/badass from Stieg Larson’s Millennium trilogy and the David Lagerkrantz novels that succeeded it after Larson’s death. While the Swedish Millennium films ended up being massive art house hits, the two big budget attempts from MGM/Columbia both flopped. It wasn’t because of the lead actresses.

Lisbeth Salander (Foy) is living off the grid, using her uncanny computer skills to help out a security firm. In her spare time, she punishes the abusers of women, as she herself was a victim of sexual abuse from both her father and her guardian. It’s enough to make you hate men – and I’m a man!

She get involved with a remorseful computer programmer (Merchant) who wants her to steal his program from the American military, which will gain too much power from it. She is assisted by an NSA agent (Stanfield), crusading journalist Mikael Blomkvist (Gudnason) and fellow hacker Plague (Britton). Opposing her are the Spiders, a global criminal gang and one of their finest operatives (Hoeks) – who happens to be Lisbeth’s sister.

There is definitely some post-feminist anger deep in the DNA of this series and Alvarez manages to capture it without blunting its impact too much. The veteran horror director also proves he’s no slouch with action sequences, including a thrilling motorcycle chase. Alvarez has a very strong visual style – the white and grey of a Swedish winter is juxtaposed with the bright red attire of the Spider Queen.

Sadly, neither this film – a “soft reboot” of The Girl With the Dragon Tattoo – nor its predecessor measure up to the Swedish trilogy. Maybe Hollywood just doesn’t get the subtleties that make the Swedish versions superior; sometimes, a big budget is actually detrimental to a film. That isn’t to say that this is a bad movie – it’s certainly entertaining, and Foy does a magnificent job. It’s just not as high-quality by comparison.

REASONS TO SEE: Well-staged action sequences.
REASONS TO AVOID: Neither American film holds a candle to the Swedish film series and Noomi Rapace.
FAMILY VALUES: There is profanity, some violence and brief sexuality.
TRIVIAL PURSUIT: Stieg Larson, who created the Millennium series of novels, originally planned for ten books in the series but passed away in 2004 after writing only three. His partner Eva Gabrielson has possession of his notes outlining the remaining books, but because they were never married the literary rights passed to his father and brother. With both sides unable to agree on what direction the series was to take, the family commissioned writer David Lagerkrantz to continue the series. This book is based on his first effort, the fourth official book in the series.
BEYOND THE THEATERS: Amazon, AMC On Demand, AppleTV, Fandango Now, Google Play, Microsoft, Redbox, Starz, Vudu, YouTube
CRITICAL MASS: As of 4/20/20: Rotten Tomatoes: 40% positive reviews, Metacritic: 43/100
COMPARISON SHOPPING: Atomic Blonde
FINAL RATING: 6/10
NEXT: Gelateria