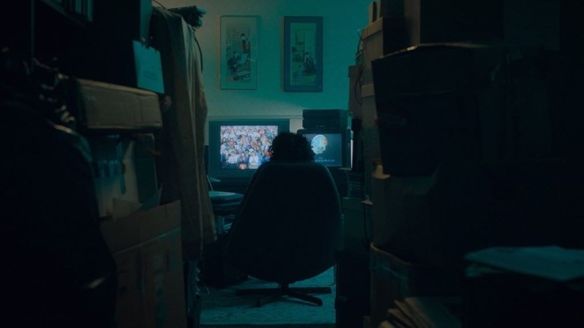 Worshiping at the video altar.

There is a very fine line between obsession and compulsion. We can take a hobby or something that we enjoy doing and allow it to take over our lives to the exclusion of all else. Sometimes, good things may come of it. Most often, however, it takes a toll on our relationships and the state of our own minds.

Marion Stokes was by all accounts a brilliant woman, an African-American Philadelphia librarian who leaned towards socialism, but after marrying Michael Metelits, became involved with the Communist Party of America, which she eventually grew to disdain for its lack of action. She and Metelits at one time wished to emigrate to Cuba but was denied an entry visa by the Cuban government.

Disillusioned, she returned home to Philadelphia where her marriage quickly crumbled. She eventually became involved with a television show on a CBS affiliate in Philly called Input, a Sunday morning talk show hosted by John Stokes, who as a contractor had become well-to-do and eventually, she and Stokes fell in love and were married.

The Iran hostage crisis fascinated Marion. She intuited that the way news was being presented to the masses was changing. Wanting to document that change with a librarian’s zeal for preservation and organization, she started recording news broadcasts. With the advent of CNN a year later, the project became much more of a life.

Marion and John became virtual recluses and Marion, whose personality had a strident tone to it, became very possessive of her husband’s time. Their children were virtually shut out from their lives (although they never had children together, they each had children from previous marriages) and Marion took complete control of John’s life. Meanwhile the taping went on, several VCRs taping anywhere from three to eight channels at any given time, with assistants changing tapes (on those rare occasions when Marion went out for any length of time, her limo driver Richard Stevens would be sent home just to change the tapes on the VCR.

Time passed, and so did John. Marion lived in virtual seclusion, with a nurse and an assistant providing companionship, as well as assistance with her project. The momentous events of the end of the 20th century (and the beginning of the 21st) were captured on Marion’s videotapes; the fall of the Berlin Wall, the royal wedding of Charles and Diana and her death years later, 9/11, the election of Barack Obama (which had special resonance for Marion) and also the minutiae – a local woman who decided to be buried in her Cadillac – and was, for example. Stories that captivated for a time and were quickly forgotten, all preserved.

When she died in 2012, she left behind more than 70,000 videotapes even though towards the end finding blank videotapes to record on had become increasingly difficult. Many of them were identified only with Post-It notes and all of them were on a type of medium that wasn’t meant to last forever. As we speak, her collection is being digitized and cataloged, something the librarian in her would no doubt approve of. One day, her incredible project will be available for everyone to peruse.

The big elephant in the room (or on the film) was Marion’s mental state. There was no doubt a bit of a hoarding mentality to her; at her death she had collected not only the videotapes but more than 50,000 books (she was a voracious reader), furniture she never used and an uncountable number of newspapers. She had gone from a single apartment in the swanky Barclay building in Rittenhouse Square in Philadelphia to seven, all full of her collections. Although her personality was generally prickly – she didn’t take to being disagreed with at all – one gets the sense that beneath that disagreeable facade there was a genuinely caring heart. We see that mostly through her son, who was estranged from his mother for a good number of years but managed to reconcile with her shortly before she passed.

While I wouldn’t say this is an essential documentary, it is a fascinating one and it’s told in simple fashion without a whole lot of bells and whistles. Fans of docs in general are going to like this; it’s the kind of film you find at your local film festival and leave deciding that if you’re going to find films like this there, you’ll have to come back the following year for more.

REASONS TO SEE: Stokes is not always likable but one has to admire her intelligence. The dizzying array of news stories she recorded is mind-boggling.
REASONS TO AVOID: The score gets a little bit annoying in places.
FAMILY VALUES: There are some adult themes.
TRIVIAL PURSUIT: Stokes was a lifelong admirer of Steve Jobs and to support him bought a massive amount of Apple stock at $7 per share. Already moderately wealthy at the time, this elevated her to a different level of rich.
CRITICAL MASS: As of 12/1/19: Rotten Tomatoes: 96% positive reviews: Metacritic: 76/100.
COMPARISON SHOPPING: Grey Gardens
FINAL RATING: 7.5/10
NEXT: Mission: Impossible – Fallout