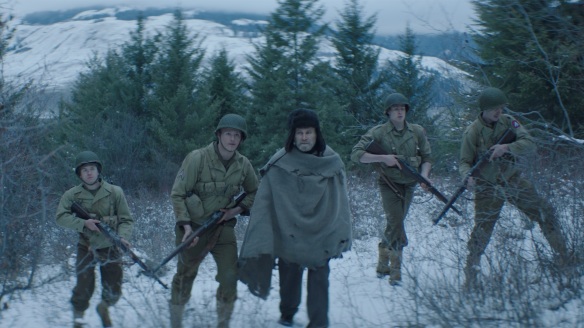 Walking in the woods on a snowy evening.

It is World War II and the fighting in Italy is coming to a close. The Nazis are on the run, and the fascist government in Rome has collapsed. An American officer, Captain Rogers (Munro) – not Steve – has tasked one of his units with going into the Italian mountains to find reliable intelligence as to where the Germans are and whether they are massing for a counter-attack.

This particular unit is a bit traumatized. They had witnessed their commanding officer (Hynes) execute an innocent and are being sent on a dangerous mission with very little idea of what they are getting themselves into. The sergeant splits his team into two units; we are following the one led by Corporal Marson (Ludwig), along with Privates Asch (Brochu), Heisman (Featherstonehaugh), and Joyner (Keeley). They run into an aged Italian man named Angelo (Nero) who is willing to lead them into the mountains – even though his English is dicey at best – and point out where the Germans are, but can they trust him, or is he really a German spy, who is leading them to their death?

It wouldn’t take much to get them there. They are being stalked by a German sniper (Jean) and the mountains are bitter cold and full of wolves. They must traverse rickety rope bridges and the stress becomes palpable as the men bicker among themselves, much to the disgust of Angelo who, as it turns out, has some military experience.

The movie is surprisingly strong, but then again, Port was an Oscar winner for his documentary short Twin Towers. He builds a sense of dread that is gripping, and while the characters are a bit war-movie cliché – the loud-mouthed city boy, the aw-shucks football player, the conflicted leader, they’re all here. Cinematographer Edd Lukas does a great job of capturing the stark winter landscape, making it both forbidding and beautiful.

The movie is a bit slow-moving as we follow this remarkably talkative unit into dangerous territory where snipers could be anywhere; even when they are under fire by a hidden gunman, they still insist on talking as if their pursuer can’t hear them. It’s a bit unrealistic and it does take the logically-minded out of the movie a bit.

The performances, though, are strong – in particular Ludwig, who most know from the recently-completed Vikings TV series, and Nero, who is worth seeing even in a fairly small but pivotal role. Brochu is also sufficiently entertaining as the team’s wiseacre. Apparently based on an actual incident (as chronicled in a book by Richard Bausch entitled Peace which was the original title of the film), the movie could have used some trimming but be that as it may, it’s a surprisingly strong, surprisingly taut war movie that should be on the radar of war movie buffs.

REASONS TO SEE: Does a decent job of setting a tense, suspenseful atmosphere.
REASONS TO AVOID: Takes a while to get where it wants to go.
FAMILY VALUES: There is profanity and war violence.
TRIVIAL PURSUIT: The movie was filmed in British Columbia.
BEYOND THE THEATERS: Amazon, AppleTV, DirecTV, Fandango Now, Google Play, Vudu, YouTube
CRITICAL MASS: As of 12/4/20: Rotten Tomatoes: No score yet. Metacritic: No score yet.
COMPARISON SHOPPING: Saving Private Ryan
FINAL RATING: 6.5/10
NEXT: Dear Santa 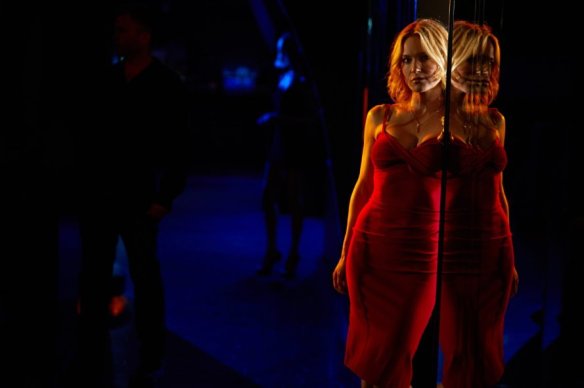 Upon reflection, some parties bring out our worst images.

It is said that in the desert that there are no shadows to hide in and that the scorching sun boils away the pretense and exposes the real person inside. I’m not sure who said it. Maybe it was just me.

A quartet of attractive people are driving on a brand new road in Death Valley on the way from a charity party in Hollywood to a spur-of-the-moment wedding in Vegas. The road is so new, in fact, that it isn’t open to the public yet but for producer Billy Rich (Munro), Hollywood Golden Boy, rules don’t apply and every door is open. He is the prospective groom and star actress wanna-be Annie Gunn (Law) is the bride. Along for the ride are married couple Roy (Tarabay) and Jamie (Pratt) Dillen, who won tickets to the star-studded exclusive party on a radio station promotion and have befriended Billy and Annie. Presumably, they will be the witnesses at the wedding.

One thing that is true about the desert is that oddball things can happen at any moment. A scantily dressed blonde (Beavan) emerges from out of nowhere and starts shooting at the people in the car. Rich, who is behind the wheel, swerves and manages to hit the blonde before skidding off the road.

The blonde is a goner. So is the car, which the blonde managed to perforate in some vital places before expiring. Of course, there is no cell service in the middle of nowhere – and because the road hasn’t opened yet, not much hope of any good Samaritans showing up from either direction. The old road is said to be about five miles away, paralleling the new road. With no real choice, the quartet begin hoofing it, taking with them the champagne they were going to toast with at the wedding.

The further they walk, the more frayed their nerves get – and the more secrets get revealed. Like a good noir film, layers begin to be scrubbed away by the gritty sand exposing further layers below. Will they find the road and presumably rescue? Or will the journey there kill the lot of them?

Those who are paying attention to the opening scene will know the answer to that. Veteran TV director Scott has a good feel for suspense, building slowly without turning it into a tension fest. This is more than a slow burn than a quick flame. He also makes excellent use of the environment, giving us some really beautifully desolate footage of the desert and giving the audience an excellent feel for how vast and forbidding an environment it is.

The movie’s problems tend to lie in the characterizations. It’s difficult to find someone to identify with in this movie because all of the main characters are pretty rotten, particularly when their guard is let down after the downing of much booze and pills. While it is kind of enjoyable to watch some sleazy Hollywood types get their comeuppance, from a human standpoint it isn’t easy to watch people suffer even though they may well deserve it.

It is also not easy to watch people make bad decisions, some of them incomprehensibly bad. For example, one of the women given an opportunity to change from her party dress and heels into something more appropriate refuses, and goes out walking on the desert sands in her heels. While I admire the grit of women who walk in heels because it requires balance and a certain amount of fortitude, I would think that heels would be absolute torture on sand. Not that I would know. In any case, I don’t think any sane person would choose that nor would anyone in a survival situation allow vanity to trump practicality.

Another thing I would have recommended is a little more focus on the Billy Rich-Annie Gunn relationship particularly in flashback. We see a little bit of them interacting at the party but we never get a sense as to why someone who is as likely commitment-phobic as Billy would be would agree to pull the marriage trigger with someone he just met. We get that Annie’s sexuality is a large part of the reason but we don’t really get to see it on display except for one scene in the desert. A little more exposition would have been nice on this matter.

Most of the technical aspects of the film are strong, but a caveat – I’m a fan of 8mm, the band that delivers the soundtrack here. While this isn’t their best work, it was definitely a plus for me to hear them doing their thing on a movie soundtrack. There are those who likely won’t think it is the advantage that I do. C’est la musique.

The ending is on the dark side, but that’s what happens with noir. You don’t get many uplifting, feel-good movies of the year with noir. This is a movie about a dark descent of four people who are More Than What They Seem, another noir trope. Fans of the genre should be sufficiently pleased although the movie has its share of flaws. Nonetheless, a fine effort for those looking for some sun-baked (literally) off the beaten path entertainment.

REASONS TO GO: Some beautifully desolate cinematography. Dark ending. Soundtrack by 8mm.
REASONS TO STAY: Lack of sympathetic characters. Some weak moments in the script. A little bland for the type of movie it is.
FAMILY VALUES: There is plenty of foul language, some sexuality and some graphic violence.
TRIVIAL PURSUIT: Law and Tarabay have both appeared in the television shows Arrow and Spartacus.
CRITICAL MASS: As of 10/20/15: Rotten Tomatoes: No score yet. Metacritic: No score yet.
BEYOND THE THEATERS: Amazon, Vudu
COMPARISON SHOPPING: Lifeboat
FINAL RATING: 6/10
NEXT: The Walk