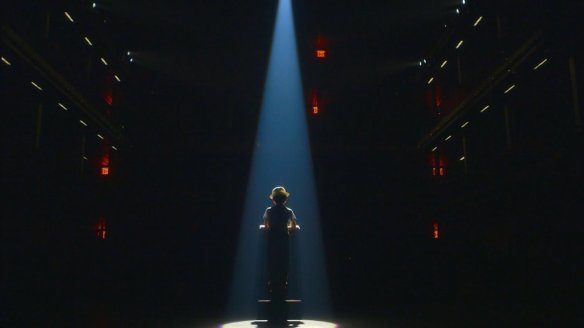 Little Norman at the lectern.

One of the giants of the television landscape is Norman Lear. While there are those who criticize his politics (he’s an unabashed liberal who brought progressive thought to the airwaves back when it was dominated by conservative sorts) nobody can deny the success that he enjoyed (the only man to have six shows in the top ten simultaneously) nor the legacy he left behind.

This documentary is mainly aimed at the glory days of Lear’s career in the 70s, as we follow the creation and execution of shows like All in the Family, Maude, Good Times and The Jeffersons among others. There are some interesting things worth noting, like Carroll O’Conner had a very hard time reconciling his own liberal beliefs with the racist dialogue his character had to say. He often fought Lear on certain elements of dialogue because he felt so uncomfortable about saying it, even as a character not himself. Generally, Lear prevailed and as such we got Archie Bunker, America’s favorite bigot as TV Guide once termed him.

While there are plenty of talking head interviews, the most interesting are with Lear himself who even as a nonagenarian is clear-eyed and a charismatic raconteur. While some of the interviews come a bit close to fawning, certainly if anyone warranted such treatment its Lear. As we hear from such modern comedy icons as Amy Poehler and Jon Stewart (as well as Everybody Loves Raymond creator Phil Rosenthal) one gets a real sense of just how influential the man continues to be. Certainly the modern television landscape would be a very different place without him.

Best of all, we get to see a goodly amount of clips of some of the various shows’ best moments. For those like myself who grew up in that era, the sense of nostalgia is palpable, and very welcome. While I didn’t religiously watch these shows (I grew up in a conservative household with a dad who thought Lear was too political and certainly too much of a leftie for his tastes), I did watch them often and enjoyed them.

There is a bit of a misstep; there are some linking devices here with a young boy, wearing a hat similar to the one that Lear has become known for wearing (for more than 50 years, no less) apparently playing Lear as a young man re-enacting some of the events of Lear’s life on a bare stage. While I give the filmmakers props for at least trying to get out of the typical talking head/archival footage mode that characterizes most profile documentaries, it just doesn’t work.

And there’s the rub. I don’t think we get a very complete view of who Lear the man is, but you’re not really going to do that in an hour and a half in any case. Thinking that any documentarian can do so is simply unrealistic. We do get a good sense of Lear’s accomplishments and what he means to modern television in general. We also come to the understanding that as influential as Lear is, and as much as his work echoes into the modern day small screen ethos, nobody makes ‘em like the master anymore and there is a hint of the bittersweet in that fact that is inescapable. There will never be another quite like him.

REASONS TO GO: Some very powerful emotional moments. A trip down memory lane. Really gives you an idea of how influential Lear is.
REASONS TO STAY: Not sure we needed Little Norman.
FAMILY VALUES: A little bit of profanity.
TRIVIAL PURSUIT: Lear was 93 years old when interviewed for this film.
CRITICAL MASS: As of 4/17/16: Rotten Tomatoes: 80% positive reviews. Metacritic: No score found.
COMPARISON SHOPPING: The Kid Stays in the Picture
FINAL RATING: 8/10
NEXT: Wrestling Alligators