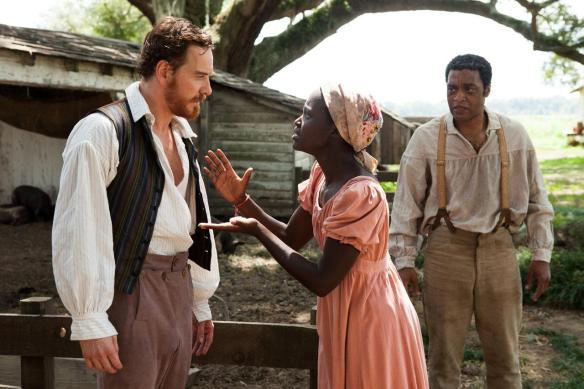 Could this be the next Best Picture Oscar winner?

The question we sometimes have to ask about a movie depicting a horrible epoch in human history is why. Why should it be made? After all, it’s not exactly a secret that slavery was a terrible, shameful practice. But do we need to be reminded of that?

I believe that we do. In the same way movies like Schindler’s List reminds us of the holocaust, or Hotel Rwanda reminds us of the horrors of genocide, we need to remind ourselves periodically of the depths of inhumanity that man practices upon other men. We need to be reminded as Nicol Williamson once accurately (albeit bombastically) said in Excalibur that it is the doom of men that they forget.

Solomon Northup (Ejiofor) is a prosperous man in Saratoga, New York in 1841. While he is a black man, he is nonetheless freed and is well-known as a magnificent violinist but also a hard-working carpenter. His wife Anne (Scott) is highly respected as a great cook. They have beautiful children and as African-Americans in the mid-19th century go, a pretty wonderful life.

Then, he is approached by a couple of men calling themselves Hamilton (Killam) and Brown (McNairy) who represent themselves as entertainers in need of an accompanying musician. They are going as far south as Washington, DC. The money is good and the company congenial so Northup agrees to lend his services.

He awakens in chains in a slave market. Gone are his clothes, his papers identifying him as a free man and even his name – he is to be called Platt now. He is sold by the dealer (Giamatti) to Ford (Cumberbatch) who runs a sugar cane plantation near New Orleans. There he goes with the disconsolate Eliza (Oduye) who has been separated from her children. However, Northup gets into a fight with the cruel and barbarous carpenter Tibeats (Dano) who for some reason has it out for Solomon (possibly because Northup was a better carpenter) and for the safety of his slave and of his plantation, the kindly Ford is forced to sell Platt to the cruel Edwin Epps (Fassbender) who runs a cotton plantation.

Epps expects 200 pounds of cotton to be picked by each one; those who fail are lashed cruelly. The best cotton picker is Patsy (Nyong’o) who does three times what the burly men of the plantation can do. Epps has taken an unhealthy sexual interest in her which infuriates his wife (Paulson) who visits cruelties and mutilations upon Patsy. Solomon for his part is keeping his head down low, making sure nobody knows that he can read and write. When Solomon meets an itinerant Canadian carpenter (Pitt), he knows his last chance to get word to those in the North of his whereabouts may be staring him in the face.

Based on the memoirs of the real Solomon Northup, I’m told the film follows the book pretty closely – McQueen insisted on it. While I can’t personally vouch for that, I can say that this is an incredible story told with as much authenticity as the filmmakers can muster. That this is a British production is somewhat ironic that it takes a foreign eye to shed light on an American disgrace.

There is a good deal of brutality. When slaves get whipped, pieces of flesh fly from their back and the resulting cuts are hideous to behold. It’s not easy to watch but this was the reality of what happened. Too often Hollywood portrays a whipping as a grunting actor, jaw heroically clenched against the pain as lines of red appear on his back. In reality, whippings were horrid affairs with a good deal of screaming and bloodshed. To his credit, McQueen doesn’t turn the eyes of the camera away and we see the brutality in unflinching detail.

Ejiofor has long been one of those actors who has been patiently waiting the right role. He’s finally found his. One of the best actors you’ve never heard of out there, he plays Solomon with dignity, with fear and with humanity. Solomon is a smart guy and occasionally able to manipulate Epps but his own inner fire gets him into trouble sometimes. He is a shoo-in for an Oscar nomination come January and is an early favorite to win it.

Fassbender has been busy of late and might get a Best Supporting Actor nomination for his layered and nuanced performance as Epps. Certainly Epps is a cruel and vicious master, but he is also henpecked by his wife to a certain degree and a slave to his own lust for Patsy. Epps could have easily been portrayed as a caricature of a plantation owner; yes, there is evil here but it isn’t cartoon evil but the evil that slavery creates in the slaveowners.

Nyong’o is a newcomer but her performance as Patsy may bring her the kind of notice new actresses dream of. Patsy is the face of despair in the film and Nyong’o handles it with a certain dignity that at once is moving and disturbing. When the despair overwhelms her and she begs Platt to end her misery, one wonders how many slaves took that road off the plantations. Probably many more than we realize – when hope is dead, the will to live generally dies with it.

This is a movie that is certain to be considered for Oscar gold this year and is going to make a lot of year-end top ten lists. While it may be considered an education about slavery, I see it more as a metaphor for the continued inhumanity that we enforce on others. The message here isn’t that slavery is  bad; I’m pretty sure we all get that. It’s how we treat each other today and how our ability to enslave others has informed that treatment that makes this movie so important. While I would hesitate to bring small children to see this, I think parents should bring their teens. Opening the eyes of a younger generation isn’t necessarily a bad thing.

REASONS TO GO: Impeccably acted by Ejiofor and Fassbender. A living breathing testament to the horrors of slavery.

REASONS TO STAY: The violence and brutality can be overwhelming at times.

FAMILY VALUES:  There is plenty of violence and scenes of torture and cruelty. There is also some nudity and sexuality, as well as a few graphic images that may be too intense for the sensitive.

TRIVIAL PURSUIT: Henry and Wallis both co-starred previously in Beasts of the Southern Wild, also distributed by Fox Searchlight.

NEXT: Italian for Beginners