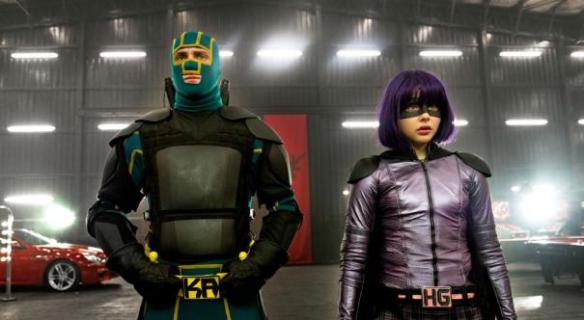 Kick-Ass and Hit Girl are nonplussed to discover that they’re not getting action figures made after all.

Although I have it labeled as a superhero movie (and indeed that is how this movie is essentially classified nearly everywhere), it’s not quite accurate. You won’t find a single superhero in this movie. What you will find is a movie about people who love and regard superheroes as idols to emulate.

Taking place a couple of years after the original Kick-Ass, the sequel finds Mindy Macready a.k.a. Hit Girl (Moretz) is cutting classes to go work out with Dave Lizewski a.k.a. Kick-Ass (Taylor-Johnson) who after an entire movie of getting beaten to a bloody pulp by bad guys wants to better be able not only to defend himself but to inflict some damage as well.

Seething in the background is Chris D’Amico, formerly the Red Mist (Mintz-Plasse) whose father was blowed up real good by Kick-Ass at the end of the first movie. He wants his revenge although his mother (Butler) doesn’t take him all that seriously. His bodyguard Javier (Leguizamo) does and when Chris – after an untimely accident – decides to become the first supervillain, Javier is not thrilled with the idea but supports him nonetheless.

When Mindy’s guardian Marcus (Chestnut), a cop, discovers what she’s been up to, he makes her promise to stop being Hit Girl. She starts hanging out with Brooke (Lee) and the other popular girls, trying on a normal life on for size. She finds out quickly that it doesn’t quite fit.

In the meantime Dave has found a new superhero team led by Colonel Stars and Stripes (Carrey), a born again ex mobster. The roster includes Insect Man (Emms), Dr. Gravity (Faison), Night Bitch (Booth) with whom Kick-Ass strikes up a – ahem – physical relationship, and Battle Guy (Gregg) who turns out to be Dave’s friend Marty. Eventually they bring in the other member of Dave’s high school circle, (Prew) so that he doesn’t feel left out but he seems unable to be anything but derivative of Kick-Ass’ name and costume.

For his part D’Amico, going by the name of the Motherf*cker, has assembled a team of villains of his own including Mother Russia (Kurkulina), an ex-KGB agent who is a walking, talking advertisement for steroid abuse. He means to take things up a notch and bodies are going to hit the floor. With Hit Girl on the sidelines and only amateur heroes to stand at his side, can Kick-Ass survive the assault?

First off, the level of violence in this movie is fairly extreme and occasionally graphic, particularly in the third reel. People get hurt, people get maimed and people get killed. The kind of game that Kick-Ass was playing in the first movie is over; the stakes are way higher. There are consequences to putting on the costumes and they are illustrated here.

The movie has gotten a bad rap for that violence and I can only say this; if you’re squeamish about such things, this really isn’t a movie you should be seeing. However, I do believe the violence in the film isn’t as gratuitous as critics – including star Jim Carrey who has famously disowned the film – would lead you to believe. The violence here has a purpose and while you may agree or disagree with that purpose, it nonetheless does have a reason for being.

While Taylor-Johnson has yet to impress me in either Kick-Ass movie, Moretz is amazing here. She is a terrific young actress who captures all of Mindy’s adolescent self-doubts and yearning for acceptance and love. She is a lonely little girl who misses her daddy and that aspect is played up well by Moretz.

Leguizamo does a good job too as the bodyguard/mobster with a heart of gold. I also quite liked Mintz-Plasse who really captures the evil of  Chris D’Amico, driven to the dark side with mad thoughts of revenge. Chris might be a bit of a joke but that doesn’t make him any less evil.

I will say that I found this entertaining enough, but not enough to stand out which isn’t a good thing in one of the most mediocre summer blockbuster seasons in recent memory. Like most of the other movies I’ve seen this summer, Kick-Ass 2 isn’t bad – it just isn’t any more than that.

REASONS TO GO: Entertaining and funny. Moretz is fabulous and so is Leguizamo.

REASONS TO STAY: Unrelentingly brutal, particularly in the final reel.

FAMILY VALUES:  A buttload of violence and a shitload of profanity. There’s also some sexual content and a bit of nudity.

TRIVIAL PURSUIT: Carrey bought his own props and costume in an effort to look more like the comic book version of his character – which, in the comic book, was actually two characters: brothers Colonel Stars and Lieutenant Stripes.

NEXT: The World’s End 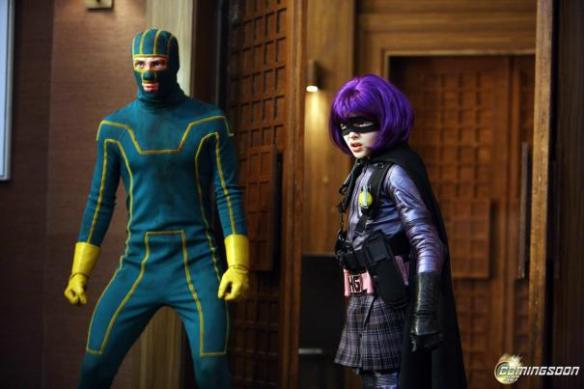 Kick-Ass and Hit Girl do what they do best.

Everyone wants to become that which we most admire. We want to be heroic, rich, athletic, good-looking, shrewd or all of the above. We long to become the same type of person as our heroes. If our hero has superpowers, however, that becomes a bit dicey.

Dave Lizewski (Johnson) is a gawky, rail-thin high school student whose only power, as he himself admits, is to be invisible to girls, in particular Katie Deauxma (Fonseca) whom he is sweet on. His mom (McGovern) had a massive aneurysm at the breakfast table and died a couple of years earlier, leaving Dave and his somewhat oblivious dad (Brown) trying to make things work alone together. He hangs out with his fellow geeky friends Marty (Duke) and Todd (Peters) at the local comic book store slash cafe. The three of them are constantly being set upon by bullies and having their money and things taken from them.

Dave is fed up with this. He wonders why, with all the comic books in the world, nobody has actually attempted to be a costumed superhero (his friends respond “because he’d get his ass kicked in five minutes,” which seems accurate to me). Being fed up, he orders a wet suit that looks a bit like a superhero costume and decides to try out the lifestyle for himself.

His first attempt ends up horribly, with Dave ending up hospitalized. The silver lining on that cloud is that his nerve endings wind up “messed up,” allowing Dave to not feel pain as much as the rest of us do. That turns out to be very handy in his line of work. When Dave intercedes in a gang beating, the incident is captured on a phone cam and becomes an Internet sensation. When Dave is asked who he is, he responds “I’m Kick-Ass” and a legend is born.

What Dave doesn’t know is that there are a couple of costumed vigilantes who are actually out there. Damon Macready a.k.a. Big Daddy (Cage) is teaching his daughter Mindy a.k.a. Hit Girl (Moretz) to be a lethal combat machine. Damon has an issue with crime boss Frank D’Amico (Strong) who was indirectly responsible for the death of his wife and he intends to take him down, despite the objections of his ex-partner Marcus Williams (Hardwick) who worries about the effects of this on Mindy, whom he helped raise.

Through a set of coincidental circumstances, D’Amico gets his sights set on Kick-Ass who was present at a massacre of thugs by Hit Girl. The most unprepared superhero of all time is about to face unimaginable brutality; can he become the superhero he longs to be?

This isn’t your big daddy’s superhero film. This is a movie that is literally awash in cultural reference, so much so that you might wind up wondering if Quentin Tarantino has a hand in it (he doesn’t, but I suspect he finds this movie delightful). Director Matthew Vaughn, who made the criminally underrated Stardust as well as the ultracool crime drama Layer Cake, hits all the right notes here, from the many references to superhero movies from Spider-Man to Batman with stops at Men in Black and Mystery Men.

There are also some nice little subtexts, with Katie striking up a friendship with Dave because she thinks he’s gay, and much of the ass-kicking being done by 11-year-old Mindy, who has the mouth of a sailor and the moves of Jet Li; one of her first sequences is done to the timeless strains of the Dickies’ version of “The Banana Splits Theme Song.”

Now some, like Roger Ebert, have found the latter aspect reprehensible. Certainly Hit Girl is not meant to be a role model; it seemed to me that the filmmakers took special care to make sure she didn’t wind up that way. Was she put in mortal jeopardy? Yes she was, but I’m one of those folks who don’t think that should be taboo. After all, nobody said boo when two kids were menaced by a T-Rex in the original Jurassic Park and it is no less fantasy for a kid to be menaced by a hallway-full of machine gun-toting goombahs. However, it is true the violence is excessive and brutal in places and sensitive souls may find it to be too much.

That said, I found this to be a good deal of fun. While Moretz was a bit too cute in places, Cage and Johnson held up their end well and Strong is rapidly becoming one of the best villains in the business, his brutish D’Amico a far cry from the urbane Lord Blackwood in Sherlock Holmes but just as vicious and effective.

A special mention of Christopher Mintz-Plasse should be made. Although I don’t want to give away too much about his role as it is crucial to the plot, let me say I think he’s perfectly cast for the role and adds a good deal to the movie. He also nicely sets up a prospective sequel should the box office warrant it.

This is meant to be over-the-top and satirical, and those who find videogames to be too tame will probably have some fun with this. For the rest of us, check your inhibitions at the door, and try to keep in mind this is just a movie that’s not meant to be taken as a serious examination of societal woes. It’s a live action Looney Tune, and there’s certainly nothing wrong with the occasional anvil to the head.

REASONS TO GO: Stylized violence, a wicked sense of humor and an accurate portrayal of geekly sorts. Never afraid to go too over the top.

REASONS TO STAY: Chloe Moretz is a little too precious at times. One gets numbed to the brutality after awhile.

FAMILY VALUES: Let’s see, there’s lots of violence, some of it gory and gruesome; there’s some nudity and sexuality; there’s also some drug use. Hmmmmm….I’m thinking you might want to think twice before taking the kiddies to see this one.

TRIVIAL PURSUIT: Stan Lee makes a cameo in the movie as one of the people watching the news footage of Kick-Ass on television. Also, Nicolas Cage modeled his speech mannerisms as Big Daddy on Adam West of the television version of Batman.

HOME OR THEATER: Big, dumb, fun movies like this one need to be seen on a big screen with a raucous audience.