Heavy metal has always gotten, if you’ll excuse the expression, a bad rap among musical genres. Often the music is dismissed as self-indulgent guitar noodling with satanic lyrics, its fans as Beavis and Butthead clones. That’s neither accurate nor fair.

Metal fans have always been amongst music’s most passionate. There is a kind of tribalism that goes on with metal fans, from the tattoos of lyrics and logos to the tour t-shirts and festival followers. While there might be rivalries with different bands (Metallica and Megadeth come to mind right away), there is a camaraderie between metal fans regardless of their favorite band; they’re all in it together and even if your favorite band is Halestorm, you can still rock out to Guns ‘n’ Roses, Korn or Body Count.

This is a documentary that suffers from the desire to do too much. McHugh starts as a way for fans to discuss what about the music appeals to them, why they love the bands they do and some of this is the most interesting material in the film, like the midwestern Mom whose kids can’t stand the music she listens to (it’s too loud) and takes one weekend off a year to attend a music festival to blow off steam and re-connect with friends and fellow metalheads.

But McHugh goes off in several other directions without any sort of plan or organization, going from the communal nature of the fans to the fine art of crowd surfing, to the casualties of the rock and roll lifestyle, to the lack of mainstream appeal of the music. The film leads off with Gene Simmons’ quote that Rock and Roll is Dead and rap has taken its place. That may well be statistically accurate, but it fails to take into account the cyclical nature of music which Simmons himself should have an understanding of since he and his band (KISS) have seen metal fall out of favor, come back in the late 80s/early 90s, and then fade away again. Sure, rap and hip hop may well be in the driver’s seat now but so was disco in the 70s; at some point kids will find something else to listen to. They always do.

There’s enough material here for McHugh to have done a miniseries on the subject, but instead he tried to cram it all into an hour and a half. That was probably not a good idea; most of the individual topics he takes off could easily use a movie of their own – the growing acceptance of women and African-Americans in the genre, the soul-grinding nature of touring and the toll it takes on family life, the healing nature of music, the relationship between fans and bands and those I mentioned previously, to name a few.

Much of the footage takes place at large-scale festival shows with tens of thousands in attendance (and often more) which might be painful for those who miss those gatherings which are probably at least another year or two away from happening again as of this writing. The effect of the pandemic on the fans and the musicians is never explored, but something tells me that this was filmed long before that. Some follow-up footage might have been nice. There also seems to be an emphasis on bands of the 80s and afterwards with curiously little mention to the hard rock pioneers of the 60s and 70s like KISS, Van Halen, Iron Butterfly, The Who, the Stones, and only a brief mention of Heart as pioneers for women in rock during that sequence. Context might have been a nice addition as well.

This is a worthy subject for a documentary and there is a definitely uplifting feeling to the film, despite a section on the passing of Chris Cornell and Chester Binnington of Soundgarden and Linkin Park, respectively. I think with a little better editing an maybe a little less scattershot approach, this could have been a lot more kickass than it was.

As a rock critic back in the day, I covered a number of the bands that are portrayed here. I have to say that the metal fans were some of the most inclusive of any I’ve ever dealt with as a rock critic. Although I tended to be more drawn to alternative music personally, I looked forward to metal shows not just because I liked the fans, but also because the women tended to be the sexiest – I was a single guy at the time, after all.

REASONS TO SEE: Gets an “A” for enthusiasm.
REASONS TO AVOID: Doesn’t really organize its subjects well.
FAMILY VALUES: There are drug references and profanity herein.
TRIVIAL PURSUIT: Halestorm, who is profiled in the film, recorded a cover of The Who’s “Long Live Rock” to promote the film.
BEYOND THE THEATERS: MUBI, Virtual Cinema
CRITICAL MASS: As of 3/18/21: Rotten Tomatoes: 20% positive reviews; Metacritic: No score yet.
COMPARISON SHOPPING: The Decline and Fall of Western Civilization II: The Metal Years
FINAL RATING: 6/10
NEXT: Lava 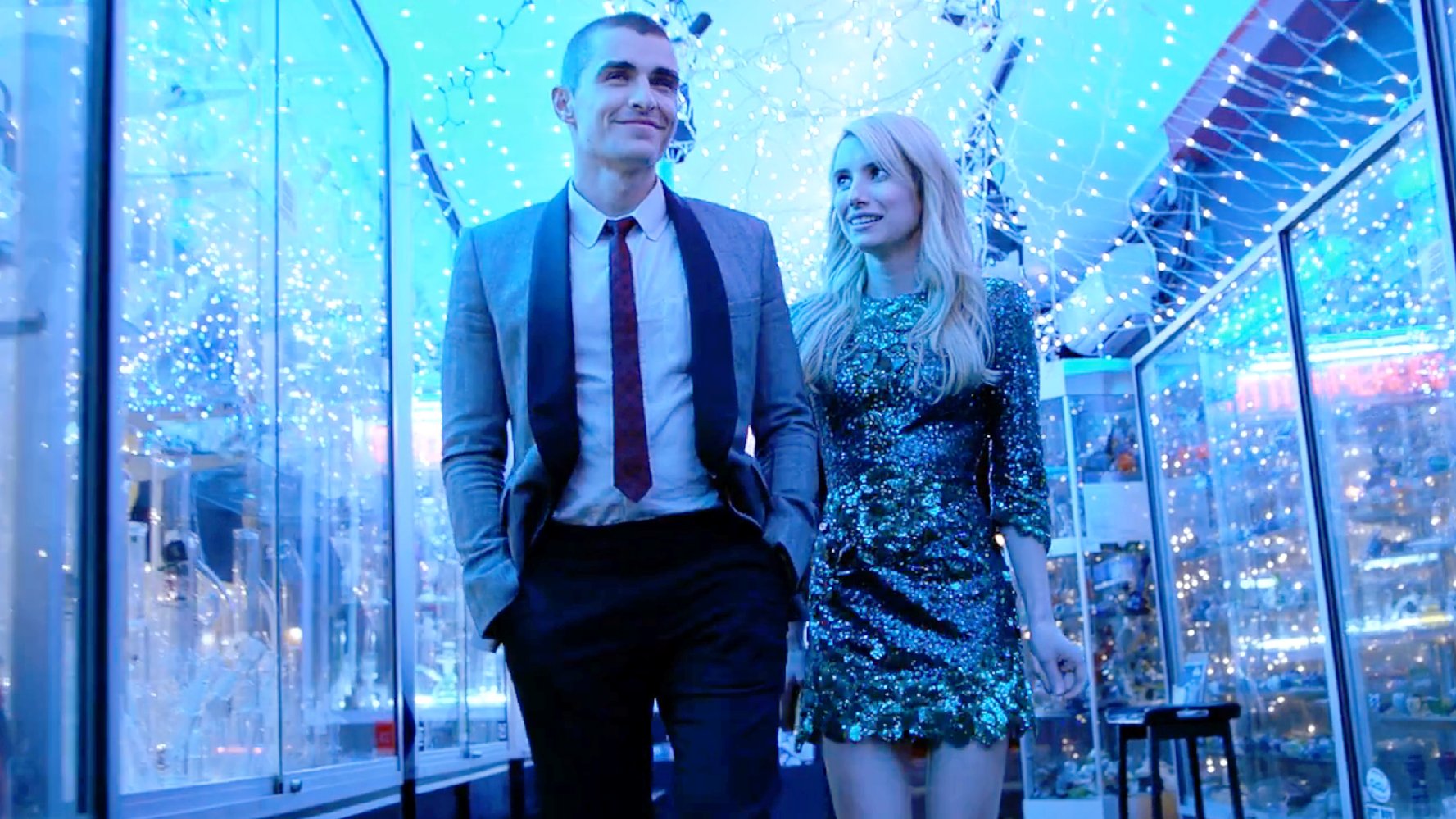 Isn’t it hip to stroll into a party fashionably late?

In this age of instant Internet gratification, it seems sometimes that those of a certain generation are fame-obsessed. They document every aspect of their lives, as if they were famous; some achieve a kind of fame on YouTube or Instagram or other websites with videos, music and art. Some even become mainstream media sensations as well.

Vee (Roberts) – short for Venus but nobody calls her that – is a high school senior in Staten Island and if there is a metaphor for boredom that’s better than that, I don’t know what it is. She is a bit of a milk-toast, unwilling to take chances. She’s been accepted at Cal Arts but is too afraid to tell her clingy Mom (Lewis) the news. Instead, she prepares to go to college locally with her mother as her “roommate.” You can imagine how enthusiastic she is at the possibility.

Her best friend Sydney (Meade) is much more of a risk-taker. She introduces Vee to an online game called Nerve in which you sign up either as a player or a watcher. Players are given time-sensitive dares to perform on camera of increasing difficulty and danger with cash awards increasing the more dangerous the dare. Watchers pay $19.99 for 24 hours and can suggest dares to be performed and follow their favorite players; the most popular players end up in a tournament of champions where the players can win big money – and everlasting fame.

Vee impulsively signs up as a player after she is embarrassed in front of the guy she’s crushing on. Despite her nerd friend Tommy’s (Heizer) misgivings (and let us not forget that he is crushing big time on her) she goes on her first dare – to kiss a stranger in a diner for five seconds. That stranger turns out (perhaps non-coincidentally) to be Ian (Franco), another player. Vee and Ian are thrown together in another dare which involves trying on ridiculously expensive clothes in Bergdorf’s before they are forced to leave the store in only their skivvies – although the clothes they were modeling mysteriously turn up for them to wear outside, bought and paid for.

As Vee’s popularity grows, the dares begin to get more and more serious – including riding on a motorcycle at 60 MPH with the driver blindfolded – and her popularity grows, becoming an instant Internet sensation, which infuriates her friend Sydney who has always been the attention-getter in their relationship. Still, as the stakes get higher and higher Vee discovers that leaving the game isn’t an option for her – and what seemed to be harmless fun has become something far more sinister. How far will she go to take the game down?

Let’s get something straight right off the bat; this movie is seriously aimed at an audience that is likely no older than 20. It is aimed at a generation that thinks anyone over that age is hopelessly techno-illiterate, hopelessly uncool and hopelessly clueless. The arrogance of youth is in perfect representation here; the feeling of invincibility that comes with someone who has a 1 or a 2 in front of their age (single digits only, wise-asses).

The look of the film is part of that. It’s cool and slick, almost like live action anime. This is the prettiest B-movie you’re likely to ever see; the lighting is superb. Roberts and Franco are perfectly cast; Roberts the good girl with a bit of a dark side and Franco the wisecracking player who’s kinda cute and kinda sweet. Both actors play what are essentially archetypes (and I don’t know if the characters come off that way in the Jeanne Ryan-penned young adult novel) and sadly, have about zero chemistry together. You never get a sense of attraction between the two of them which is one of the main faults of the movie. Perfectly cast individually yes, but the two actors can’t seem to forge a connection that is perceivable on the screen.

A lot of the stunts that the players are supposed to do don’t really generate a lot of tension; crossing between buildings on a ladder which plays to Sydney’s fear of heights seems almost anti-climactic. You never get a sense of jeopardy The same goes with the motorcycle stunt. By the time the final confrontation comes with the “evil” player TJ (Baker) there doesn’t seem to be any sort of tension whatsoever. Joost and Schulman are excellent directors visually, but this won’t go down as one of their best works. Something tells me that there are better things down the road for these guys. I certainly hope so.

REASONS TO GO: The look of the film is very cool and modern.
REASONS TO STAY: A very shallow look at fame, a very shallow subject. None of the stunts were really all that convincing.
FAMILY VALUES: The film espouses risky and dangerous behavior as entertainment, condones teen drinking, drug use and sex. There is also some brief nudity and plenty of profanity.
TRIVIAL PURSUIT: Kimiko Glenn and Samira Wiley appeared in Orange is the New Black as a romantic couple.
CRITICAL MASS: As of 8/21/16: Rotten Tomatoes: 61% positive reviews. Metacritic: 58/100.
COMPARISON SHOPPING: Gamer
FINAL RATING: 4/10
NEXT: Tallulah