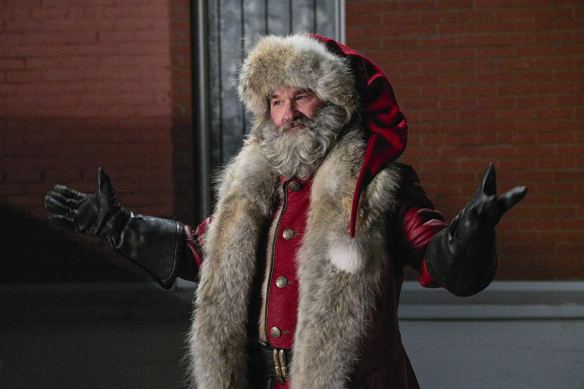 He sees you when you’re sleeping…

Every year at Christmas time there is a plethora of made-for-TV Christmas films that generally are barely tolerable. Once upon a time though, major studios made Christmas films that were heartwarming, sent a positive message and were actually entertaining but frankly, there hasn’t been one like that in the multiplexes since Elf.

Netflix has the last couple of years looked to fill that gap, with this being the crown jewel in this year’s crop of four or five Christmas releases. It has a big star, a well-known name in family filmmaking behind the camera (producer Chris Columbus) and a fairly big budget for effects and such. Does this have the makings of a Christmas perennial?

Through a series of home movies we are introduced to the Pierce family. Doug (Hudson), a firefighter, is one of those guys who puts a ton of effort into Christmas. His kids adore him and his wife is head over heels for him. Firefighting is, sadly, a very dangerous occupation and one year Dad is not there at Christmas. His wife Claire (Williams-Paisley) works in the local Emergency Room and on Christmas Eve she’s called in to cover a shift. Times being what they are – single moms need to work all the shifts they can, particularly at Christmas – she puts teen Teddy (Lewis) in charge of moppet Kate (Camp) and off sh goes to earn a living.

Kate still believes in Santa Claus which Teddy finds to be an eye-rolling mess. Teddy has fallen in with a bad crowd and is doing some underage drinking and worse, stealing cars. Kate clings to Dad’s massively outdated camcorder like Linus clings to his security blanket. She manages to convince Teddy – who against all odds decides to stay and babysit rather than go out with his friends as he’d planned to – to set up the camera to catch Santa in the act. To Teddy’s absolute shock, they do.

Going outside to get a better look at the magical sleigh, the two are accidentally taken along when Santa (Russell) takes off for his next destination. When he discovers the stowaways, he is taken by surprise and in the process loses his magic hat (which allows him to deliver presents at lightning sped), his sack of presents, the flying reindeer and the sleigh itself which crashes to Earth – in Chicago. Had Alex Jones made this movie, Santa would have had to be packing in order to make it out alive.

In any case the two kids responsible for Santa’s nightmare have to help him reclaim all his items and deliver the presents before dawn or else Christmas spirit would be drained from the world. The last time that happened, Santa tells us, the Dark Ages ensued. Somebody needs to tell Santa that there’s a good chance that the Second Dark Ages have already begun.

On the way to rescuing Christmas Santa gets arrested (!) and performs a blues musical number with Little Steven and the Disciples of Soul in the jailhouse (!!) while Kate scrambles to find the elves who turn out to be Minion-like merchandising opportunities creatures who speak in an unintelligible language. But can these two kids help Santa save Christmas – and can Santa save this family in crisis? Duh – it’s Christmas!

Russell was an inspired choice for St. Nick. He’s not the jolly old geezer that we’ve seen in past films, nor the hot mess that Tim Allen made him to be. This Santa is a straight shooter, a bit rough around the edges and well, some female reviewers have taken to calling him “hot Santa” which was enough to curl the mistletoe in my home.

As a counterpoint though are the two children. The performers are okay but they needed to be more than that to carry this film, which ends up being a Kurt Russell-fest because of it. Not that it’s a bad thing mind you but the film spends a lot of time following the kids and quite frankly you don’t want to spend a lot of time with them after the first few minutes. Kate’s actions imperil Christmas but there are no repercussions, no remorse really on her end; it’s just “they made a mess and it got cleaned up so everything’s copacetic.” Worse, there are absolutely no consequences for Teddy’s crimes which is criminal for a family film, and in fact Santa participates in a carjacking himself! It’s enough to make an elf burst into tears.

The special effects lack the wow factor of previous Santa-themed Christmas films and the stock aerial footage looks outdated. Much of the action is fairly predictable and rote and while the blues number seems a bit against the grain, it’s actually one of the best moments in the film overall – Russell really brings it. Still, it really doesn’t hold up to the Christmas movies that we tend to watch year after year. This one might get an occasional viewing once you’ve seen it once but even the least discerning Netflix viewers will probably think twice about a second streaming session but Russell’s performance is worth viewing at least once.

REASONS TO GO: Russell makes for a terrific Santa.
REASONS TO STAY: Parents might want to consider the message the film is sending.
FAMILY VALUES: There is some mild profanity and kid mischief.
TRIVIAL PURSUIT: Kurt Russell grew his beard out for the role; that’s actually his hair and beard he’s wearing as Santa, not an appliance.
BEYOND THE THEATERS: Netflix
CRITICAL MASS: As of 1/8/19: Rotten Tomatoes: 70% positive reviews: Metacritic: 52/100.
COMPARISON SHOPPING: The Santa Clause
FINAL RATING: 6/10
NEXT: Lasso