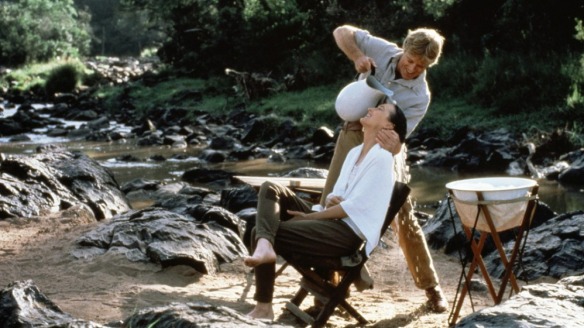 Actors will do just about anything to be in a movie with Meryl Streep.

Africa is a place that stimulates the imagination. It is a continent largely untamed in our imagination, full of wild animals and exotic tribes. Those who travel there find sometimes that it exceeds the imagination; to others it is a savage, uncivilized place. There are those who hate the heat and the culture of Africa; others fall in love with it and retain a kind of obsession.

Karen Blixen (Streep) was a young Danish woman who found her life in Denmark lacking in adventure. One of her friends, Baron Bror von Blixen (Brandauer) was single and similarly bored. They decided to marry, even though Bror had misgivings about his ability to remain faithful.

They decided to buy a dairy farm in what is now Kenya in the Ngong Hills outside of Nairobi. Bror was sent on ahead to set things up with Karen following thereafter. When she arrived in Nairobi, she was met by Farah (Bowens), an even-tempered member of the Kikuyu tribe who would become her personal servant. Farah escorted Karen to her new home. She is surprised to discover that Bror had purchased a coffee plantation rather than the dairy farm they’d agreed upon. This irks Karen mainly because it was her money he had used to do it.

Neither Bror nor Karen knew much about the coffee farming business and quite frankly the land they had chosen wasn’t really conducive to growing the plant but with the help of their plant overseer Belknap (Rimmer) they manage to at least make a go of it. However, Bror isn’t really interested in being a plantation owner; he is more interested in big game hunting and womanizing, which leads to Karen contracting syphilis which at the time was incredibly dangerous. She is forced to return to Denmark and undergo a painful and debilitating treatment which ends up with her being unable to have children.

She returns to Africa where she meets Denys Finch Hatton (Redford) and his friend Berkeley (Kitchen). She regales them with stories and they provide her with some company during Bror’s absences which aren’t all due strictly to big game hunting. At last she asks him to move out when it becomes clear that his philandering isn’t going to stop. In the meantime she has developed feelings for Hatton which lead them to move in together and become lovers.

However, Denys proves to be as untamable and elusive as Africa herself and the coffee plantation, never a money-making proposition, is on the verge of bankruptcy. A good harvest could save it, but in order to make a relationship with Denys work Karen will have to give up much of what is important to her. Can she make both the plantation and her relationship work?

I have always considered this the last great Hollywood epic. Sure, there have been other movies with the same sheer scope and grandeur as this one, but these days it’s achieved with CGI and other digital trickery. Out of Africa is a bit of a throwback to movies like Lawrence of Arabia and Gone With the Wind in that the size is achieved by set design and a lush backdrop.

The cinematography here is nothing less than spectacular. Vistas of veldt and plain, meadow and mountain show the beauty that is the Dark Continent. Lions and other wild animals inhabit this world much more comfortably than man. Set designer Stephen Grimes took a year to build a replica of early 20th century Nairobi and of Blixen’s home (not far from where it actually stood) and the look and feel is authentic.

Streep’s performance was virtually flawless. She captures the essence of Blixen – who would become better known as author Isak Dinieson – as a strong woman used to bending to the men in her life, which was not unusual for women of the time. She is determined and at times stubborn but at the same time she is lonely and wistful. She is not above dropping to her knees and begging when the occasion calls for it. She was by all accounts an amazing woman and Streep brings those qualities to life. There is a scene late in the movie where Bror informs Karen of the death of someone she loved very much. She says nothing for a moment but brings a cigarette in shaking hand to her lips to smoke. Everything is in her eyes and in the movement of a single hand but the gesture alone tells you everything you need to know. It’s as amazing a piece of acting as I have ever witnessed.

Redford once again proves himself a charismatic movie star. Although Finch Hatton was in fact British, Redford plays him as an American and almost as a cowboy in a lot of ways. Self-reliant to a fault, Denys values his freedom above all else and that makes a relationship with someone who values commitment very difficult. The two don’t seem to be a good pairing but the chemistry is undeniable and when you have two great actors in roles like this, magic is bound to happen – and it did.

Brandauer, better known in Europe, plays Bror with a playful twinkle. Even though he is a bastard at times, Brandauer is so likable we can’t help but see why Karen was so affectionate towards him even after everything he did. It’s a terrific performance and it is a shame that Brandauer hasn’t done a lot of American movies since. There are many that would have benefited from his participation.

This is a classic movie that stands the test of time. While Streep’s curls are more reminiscent of the 80s than the early 20th century, still this looks like a Hollywood film that could have come from the 50s and 60s just as easily. It is a great romance and a great adventure rolled up into one and represents the best of what Hollywood was and still can be. This is the type of film that you can get nostalgic for – and should.

WHY RENT THIS: One of the last great epic films. Outstanding performances by Streep, Redford and Brandauer. Gorgeous cinematography and score.

WHY RENT SOMETHING ELSE: May be too feminine-oriented for those who like a little more testosterone in their films.

FAMILY VALUES:  There is some sensuality as well as some light violence and mature themes. There are also a few choice words scattered here and there.

TRIVIAL PURSUIT: Streep was originally not considered for the role because she wasn’t “sexy” enough. She showed up at the audition wearing a low-cut blouse and a push-up bra and won the part. Streep would study recordings of the actual Karen Blixen reading her own works in order to get the accent and rhythms of Karen’s speaking voice down.

NOTABLE HOME VIDEO EXTRAS: There is a documentary about Karen Blixen and her time in Africa. There is a collector’s series Blu-Ray with a “digibook” that contains behind-the-scenes photos, script excerpts and personal letters which is fairly expensive.

BOX OFFICE PERFORMANCE: $128.54M on an unreported production budget; given the adjustment for inflation, I’d bet this was a blockbuster in its time.