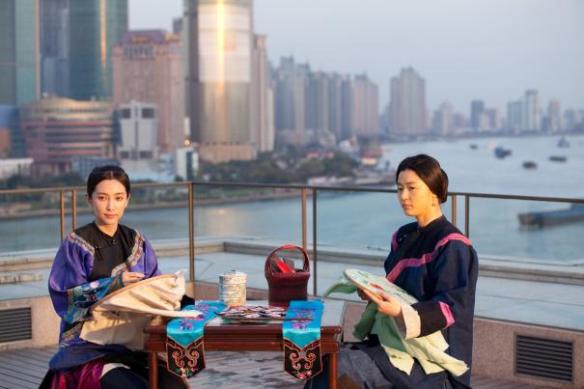 The old and the new collide in modern Shanghai.

What makes a friendship last? Is it the experiences we share or is it something deeper, a connection that cannot be explained or quantified? Why is it that our friendships sometimes seem far more lasting and deeper than our romantic relationships?

In the early 19th century in China, two young girls – Snow Flower (Jun), born into a family of wealth, and Lily (Li), born into poverty, have their feet bound on the same day (the bones broken then the feet wrapped tightly in silk in order to inhibit growth which made the feet smaller, a prized feature in ancient China) and are made laotong  – which translates to “old sames” and is a deep friendship between two women that is contractual but entered in through mutual choice rather than arrangement.

The two young girls grow up into women and each are married; Lily, whose perfect feet make her a prize, into the wealthiest family in Hunan Province and into a loveless marriage and Snow Flower, whose family fortunes have taken a nosedive when her father blew the fortune on opium, to a butcher (Jiang), the lowest rung on the social ladder in the day. Snow Flower’s marriage has its share of difficulties but at least there is some love there.

In modern Shanghai, Nina (Li) is about to leave for New York City to run the North American office of a prestigious financial firm. However, her plans are interrupted by the news that her estranged friend Sophie (Jun) has been gravely hurt in a bicycle accident, lying in a coma in a Shanghai hospital. Nina discovers that her friend is writing a book about the two laotong from the 19th century, seeing in them a parallel between herself and Nina. The occasion is hastened by an exhibit on laotong at a Shanghai gallery.

Nina decides to dig into Sophie’s life, searching for a missing fan on which Snow Flower and Lily communicated in nu shu, a secret language for women. In the process, she discovers the insignificance of the barriers between them and the importance of friendship, particularly one as deep and lasting as the one they share.

Wang, who has also directed The Joy Luck Club, based this on the bestselling novel by Chinese-American author Lisa See. He and writers Ron Bass, Angela Workman and Michael Ray, added the modern sequences which didn’t appear in the book. The device allows some juxtaposition between modern and ancient China; whether or not that was necessary is a subject of some debate.

To the movie’s credit, it captures both the ancient and modern Chinas beautifully. This is a very good looking film. Also to the movie’s credit, it doesn’t skimp on the ugliness that sometimes rears its ugly head, from the foot binding to the abuse of women and mistreatment, particularly in ancient China when they were little more than property

Jackman, who has a song and dance background from Broadway, gets to show off his singing chops as a singing nightclub owner in the modern sequences in a very small role so if you’re going to see the movie because of his presence, be aware he only appears in a handful of scenes. However the performance of Li, who plays both Lily and Nina, is strong and is one of the reasons I gave the movie a rating this high. She makes a compelling lead and carries most of the movie on her shoulders, which may seem delicate but are much stronger than they appear.

Snow Flower and the Secret Fan has received some scathing reviews, some of which I can kind of see, but others seem to be more aimed at the involvement of Rupert Murdoch (who personally lobbied to get this film released) and his wife (who is listed as a producer for the film). While I hold no love for Murdoch or his media empire, I can only review the movie, not who made it. The movie is beautifully made on a subject rarely delved into in Hollywood (even Thelma and Louise was a movie that was less about ordinary circumstances as this one is). Sure, it’s flawed – the pace is a little too slow for my tastes and I suspect that focusing on the 19th century story rather than drawing parallels in modern China would have benefitted the film overall. Nonetheless it’s a movie well worth seeing just for the insight into feminine friendships and the cinematography alone.

REASONS TO GO: A compelling look at female friendships, a rare thing in the movies. Beautifully shot in modern Shanghai and ancient China.

REASONS TO STAY: The story moves at a fairly glacial pace.

FAMILY VALUES: There’s some sexuality, some violence, a few disturbing images and some depictions of drug use.

TRIVIAL PURSUIT: The movie was scored by Rachel Portman, the first woman to win an Oscar for Best Original Score (for Emma in 1996).

HOME OR THEATER: The beautiful cinematography should be enjoyed on a big screen.