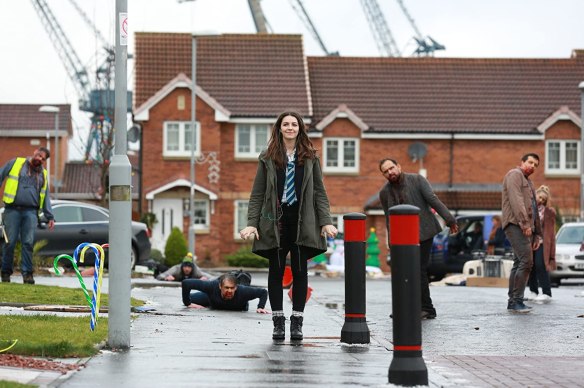 The apocalypse will have musical numbers.

Genre mash-ups are a dime a dozen these days, but who would have ever expected a Christmas zombie musical set in Scotland? Think of it as High School Musical being performed in an episode of The Walking Dead.

I don’t know if the world was waiting for George Romero’s Broadway musical, but this would fit the bill in both the positive and negative connotations of the concept. Most of the plot was cribbed from other sources, with the film’s funniest moment directly ripped off from Shaun of the Dead. Worse still, the music is bland and forgettable, lame pop that rarely rises above to be interesting (with Headmaster Savage’s delightfully evil glam number late in the film an exception). If you think Broadway musicals have achieved of repetitiveness born of a lack of creativity, this might well not be the movie for you.

The fresh-faced cast, at least, does their level best to be earnest and they do make fine pop stars as well as Scream Queens (and Kings). The movie’s concept, inspired by a Vine by the late Ryan McHenry (and how much more 2017 can you be than that?) gets an “A” for originality but falls somewhere between ordinary and extraordinary in execution.