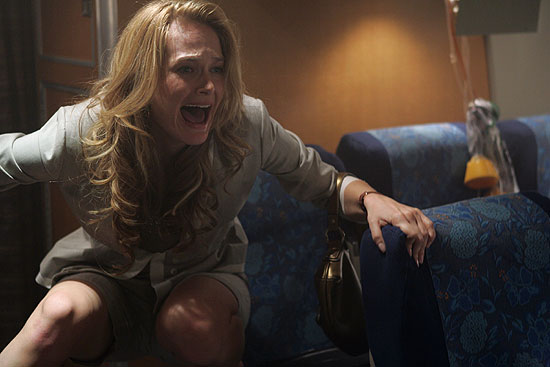 Rachel Blanchard reacts to the news that she's been cast in Snakes on a Plane.

I’ve got two words for ya – guilty pleasure. That’s all you need know about Snakes On a Plane. The internet buzz on this was incredible as fans or would-be fans design trailers, posters and merchandise in perhaps the most interactive marketing campaign in the history of movies. All the hype has really kind of obscured the fact that there is a movie behind it.

Young Hawaiian surfer dude Sean (Phillips) has witnessed a murder and not just any murder. He watched crime boss Eddie Kim (Lawson) use a baseball bat to bludgeon the district attorney that is prosecuting his case. You know that’s gonna leave a mark.

Unfortunately, Fast Eddie and his generic thugs realize that there was a witness and go to do unpleasant things to him. However, he is saved by the unfortunately-named FBI agent Nelville Flynn (Jackson), a curmudgeonly all-business kind of guy. Hey, if I was named Nelville Flynn I’d probably be in a perpetually bad mood too. Nelville convinces Sean to fly back to Los Angeles from Hawaii to testify against Kim and put him away for good.

However, the nefarious crime lord has arranged a little surprise. He has managed to smuggle a load of poisonous snakes into the cargo hold of the flight that the FBI agent and his witness are taking, and not even ordinary poisonous snakes. No, he has arranged for the deadliest snakes from around the world to be the special guests aboard the flight (but he’s so cheap he makes them fly coach). These are the exotic snakes for which the anti-venom is terribly rare and hard to find in the States.

Basically that’s all the plot you need to know. The rest of the movie is made up of the terrified passengers and crew trying to keep the plane aloft while they get snakes attacking any and every orifice on the human body, not to mention every bit of genitalia they can find. Admittedly most of the human cast members are walking, talking cliches – the plucky stewardess (Margulies), the spoiled rich girl (Blanchard), the quirky rapper (Alexander) and his bodyguards – the big one (Dallas) and the video game-obsessed one (Thompson). Then there’s the matronly mentor stewardess (Shaye), the effeminate steward (James), the oversexed nymphet (Holmes), the slimy co-pilot (Koechner), the kick-ass FBI agent (Cannavale) and the nerdy snake expert (Louiso). The fun comes in trying to figure out which ones will still be vertical at the end of the movie.

Don’t think too hard about anything onscreen or your head will just explode, and who wants to see blood and grey matter on the couch? This is all concept and no plot, and logic takes a backseat to pacing. Once the snakes get loose, it’s a rollercoaster and the best thing to do is just sit back, enjoy the ride and ask no questions. How did Nelville know to rescue Sean at his apartment when he hadn’t reported the murder to the police? Don’t even think about it. You can feel the C-4 in your head beginning to burst if you do.

This is Jackson’s movie to carry and he does so with panache. He does the movie straight which is actually a good thing. Too much of that grin and wink stuff and the movie turns into self-parody and suffers because of it. Instead, he’s just serious enough to keep the movie in the realm of semi-serious. Most of the humor comes in the over-the-top approach the filmmakers and effects crew take. Why film a dozen snakes when you can film 450, and why have snakes chow down on human adults when they can swallow them whole. Are you questioning it? I can smell the smoke coming out of your ears all the way from here. Not worth it man. Just go with it.

This is pure empty-headed fun, the kind of thing that you watch, enjoy and forget about 15 minutes later. There was never a possibility of any Oscars for Snakes on a Plane unless they started handing them out for marketing campaigns, which they didn’t, but that’s okay by me. This is the kind of summer movie fun that wears it’s intentions on its sleeves and let’s face it; there is nothing wrong with a bit of harmless brainless visceral pleasure.

WHY RENT THIS: Pure empty-headed fun that never tries to reach beyond it’s grasp. Perhaps the walking talking poster boy for guilty pleasures. This is the ultimate Samuel L. Jackson movie with his ultimate line – “Get those motherbleepin’ snakes off my motherbleepin’ plane!”

WHY RENT SOMETHING ELSE: Anyone who requires a dose of logic with their plot will find themselves banging their heads against the living room wall after seeing this.

FAMILY VALUES: To put it succinctly, no family has these kinds of values but let’s face it – it’s all in fun. Older teens will think it a bit dated (despite only being four years old) but enjoyable; just about anyone younger than that will have nightmares over the snakes, the drug use, the language, the sex, the violence and the acting.

TRIVIAL PURSUIT: The film’s title originated at an after-work get-together at a local watering hole by several studio employees who played a game where each tried to come up with the worst possible pitch; the winner was Craig Berenson, who then worked at DreamWorks and eventually served as producer on the movie.

NOTABLE DVD EXTRAS: Some of the fan films that helped fan the initial internet hype are included here.  There is also a gag reel, a music video of Cobra Starship’s title song and a making-of featurette of the music video.

BOX OFFICE PERFORMANCE: $62M on a $33M production budget; the film broke even.