Star Wars: The Rise of Skywalker

(Disney) Daisy Ridley, Oscar Isaac, Adam Driver, John Boyega.  The saga of Star Wars comes to a final conclusion after 42 years following 12 movies along with untold animated episodes, television specials, novels and comic books. Director J.J. Abrams returns to the big chair to bring this all to a conclusion but fear not fans: a new trilogy will begin on December 16, 2022! December 20

OTHER WIDE RELEASES TO WATCH FOR:

(Momentum) Aaron Taylor-Johnson, Billy Bob Thornton, Odessa Young, Giovanni Ribisi. A young writer, having hit rock bottom with his alcohol and drug addictions, checks into rehab. Based on the memoirs of James Frey (which he later admitted were largely fictitious), this is the account of a man who resigned to death, found hope instead. December 6

(Amazon) Felicity Jones, Eddie Redmayne, Himesh Patel, Phoebe Fox. An intrepid balloonist and a pioneer meteorologist ascend in a hot-air balloon to do weather research, but the ascent turns into a fight for survivor as they climb to the upper reaches of the atmosphere. December 6

(A24) Marianne Jean-Baptiste, Sidse Babett Knudsen, Hayley Squires, Leo Bill. Who would have thought that the scariest movie of 2019 might just be this English film about a cursed dress? Check the trailer out…but not while you’re alone at night. December 6

Portrait of a Lady on Fire

(NEON) Noémie Merlant, Adéle Haenel, Luána Bajrami, Valeria Golino. A young female painter gets a commission to paint the portrait of a prospective bride on a remote island in Brittany. The girl is terrified of her potential marriage and doesn’t want the painting to be completed, so the painter must work in secret, posing as a companion, a companionship that soon becomes genuine…and romantic. December 6

(Fox Searchlight) August Diehl, Valerie Pachner, Michael Nyqvist, Matthias Schoenaerts. The story of Franz Jägerstatter, an Austrian who refused to fight for the Nazis during the Second World War – and what his refusal cost him. December 13 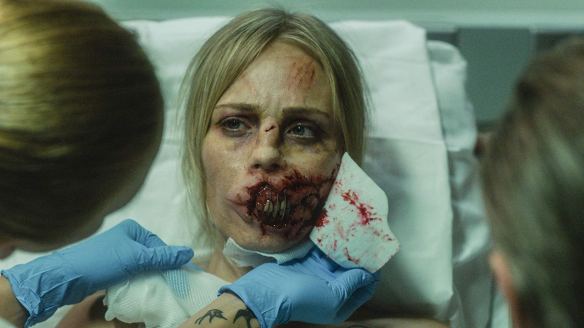 (SHOUT!) Laura Vandervoort, Ted Atherton, Mackenzie Gray, Stephen McHattie. A young woman, horribly disfigured in a terrible accident, undergoes a radical untested stem cell treatment. As it turns out, the treatment seems to have been successful but there are unforeseen side effects. December 13

(Amazon) Kristen Stewart, Margaret Qualley, Zazie Beetz, Anthony Mackie. Actress Jean Seberg became a star of the French New Wave. Her support for civil rights activism brought the wrath of J. Edgar Hoover and the F.B.I. upon her and they set out to destroy her career and life. December 13

(Netflix) Anthony Hopkins, Jonathan Pryce, Juan Minujin, Sidney Cole. Pope Benedict, a staunch conservative, is the leader of a Catholic church in crisis. He soon develops a relationship with the cardinal who would one day become Pope Francis, one who has sought to reform the Church. This is the latest from acclaimed director Fernando Meirelles, Oscar-nominated for City of God. December 20

The Song of Names

(Sony Classics) Tim Roth, Clive Owen, Jonah Hauer-King, Catherine McCormack. A Polish boy of Jewish faith is adopted by an English family and becomes an amazing violin player. On the eve of his international concert debut, he disappears. His adopted brother spends the rest of his life trying to find him. December 25