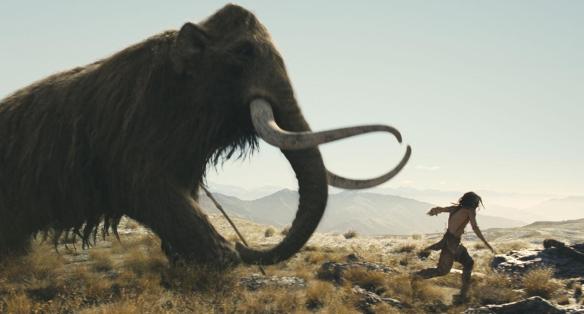 Being chased by a mastadon can ruin your whole day.

Our prehistory as a species before the great empires of Egypt and Assyria is basically a mystery shrouded by the years. Nothing remains of our nomadic existence prior to the founding of cities except for a few artifacts scattered here and there in Africa, China and a few other places. One can’t help but wonder what came before.

The Yagahl tribe lives peacefully in a post-ice Age valley where herds of mastodon placidly migrate every spring, providing the tribe with most of their food, clothing and shelter. Like the aboriginals of North America once the Europeans showed up, the Yagahl are finding it more and more difficult to keep things going; the herds are getting sparser and appearing less frequently and this being the stone age, nobody’s quite got the knack of the gathering part of hunting and gathering yet.

The Shaman, known only as Old Mother (Hammond) has a vision when an orphan is found on the steppes; this blue-eyed girl (Unwin) is going to become the woman of the strongest warrior in the tribe. Together, they would lead the tribe from their current existence and into a time of prosperity and plenty. The current holder of the number one warrior (Beazley) is less sanguine about it; he doesn’t think that the tribe has long enough to wait for the girl to grow up, so he skedaddles, leaving his infant son in the care of his best friend Tic’Tic (Curtis).

Years later, the young son, known as D’Leh (Strait) which is held – the German word for hero – spelled backwards has lived with the stigma of a father who deserted the tribe, something that is the height of cowardice in their culture. He has fallen in love with the blue-eyed girl, who has grown up into a gorgeous woman named Evolet (Belle). Still, he has no chance at being the tribe’s alpha male – that would seem to be the destiny of Ka’Ren (Zinal), a buff, burly homo sapiens. Still, when the mastodon herd arrives, it is the determined D’Leh who gets the kill, but as he sheepishly admits to Tic’Tic later, it was a matter of luck and not courage that took down the mastodon.

Things get really dicey when the tribe is attacked by “four-legged demons” – slavers on horseback, who kill some of the tribe and take the rest as slaves, including most of the healthy men, but worse yet, also Evolet, who has caught the eye of their leader (Badra). D’Leh vows to go after the woman he loves, also knowing that the tribe won’t survive without most of its hunting force. Tic’Tic decides to go with him, as does a reluctant Ka’Ren. They are followed by Baku (Baring), a young teen whose mother was murdered by the slavers.

They follow them over the mountain range, which nobody from the tribe has ever done, and into a steamy jungle where they and the raiding party are attacked by giant carnivorous dodos. Ka’Ren and Baku manage to get captured by the raiders when D’Leh tries to free Evolet prematurely. Tic’Tic also gets injured.

Following the raiders out of the jungle and onto a grassy African plain, D’Leh encounters a Sabretooth tiger and frees him from a trap. The grateful tiger spares D’Leh’s life and later shows up when a hostile tribe of Africans threaten D’Leh and Tic’Tic with spears. A prophecy of a hero who talks to tigers instantly turns D’Leh into a VIP and the tribe is very ready to have D’Leh lead them against the raiders, who are building a vast city with a gigantic pyramid with slave labor – essentially the tribe mates of the Yagahl and all the veldt. However, it’s a tall order; given that the raiders outnumber the peace-loving tribes. However, if D’Leh can convince the slaves to revolt, they might have a chance, but is he the leader that the prophecies say he is?

The cast is mostly unknowns both at the time this was filmed and years later although both Camille Belle and Cliff Curtis have gone on to pretty decent careers since. Of course you have Omar Sharif – who is the off-screen narrator – who is a legend and deservedly so. There’s not a lot for them and their lesser-renowned cast mates to do. The main thrust of the movie is the gee-wow effects and not the story so few manage to rise above the cliché strata although Belle is certainly beautiful to look at and Curtis manages a nice performance.

The effects of the creatures and the raider city are really mind-boggling. If you choose a movie for great special effects and an imaginative setting, this one has both of those in spades. Although Emmerich is not an impressive director, he is at least an imaginative one, and he brings a vision to life of a world nobody has ever seen. In many ways, you really don’t know what to expect next since D’Leh and his fellow Yagahl who have never left their valley don’t know either. The pacing is nice, although the movie tends to hiccup when they move into the romantic part of the story.

The story is…ummmmm, how shall I say this…superfluous. I think the movie might have benefited from some stronger characters and better writing, but quite frankly, there’s nothing that’s really egregious here on that score. Most of the technical work – the music, the cinematography, the editing, etc. – is competently done, but nothing really breaks new ground except the subject matter itself.

This got some pretty harsh reviews, and I can’t say that I don’t see the flaws. Yes, there’s nothing really new here story-wise, but because you are being transported to a place nobody has really even attempted to show in film, it’s kind of a wash. Go in with low expectations for characterization and story and high expectations for action and special effects and you’ll be fine..

WHY RENT SOMETHING ELSE: No plot to speak of. Writing is poor and characters kind of all blend together eventually.

FAMILY MATTERS: There is a scene of human sacrifice, and some of the critters are extremely menacing, particularly the dodo-raptors, who are a cross between the raptors of Jurassic Park and the angry giant birds of Mysterious Island.

TRIVIAL PURSUITS: The constellation referred to in the film as “the sign of the warrior” is actually Orion. That constellation also played a key role in a previous Emmerich film Stargate.

NOTABLE HOME VIDEO FEATURES: The Blu-Ray edition adds a featurette (not on the DVD version) that focuses on author Graham Hancock whose Fingerprints of the Gods opines an advanced civilization that existed during the epoch the movie is set in. Although primarily about his own theories, the featurette does tie in with the movie somewhat.

NEXT: Fiddler on the Roof