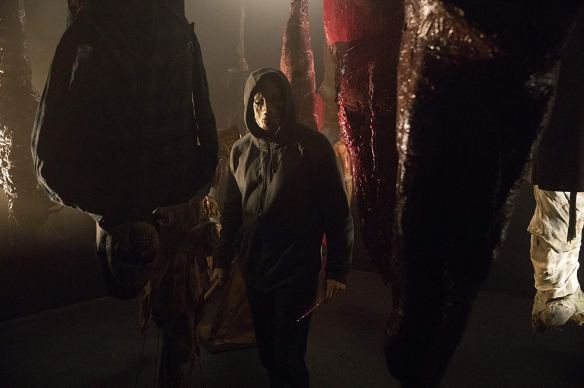 Seeing a guy in a hoodie and a mask carrying a knife is never a good thing.

Let’s face it; getting scared is fun. It makes our hearts beat faster, our adrenalin spike and our breath quicken. For young men, it gives us a chance to be protective of our dates who might even be suitably grateful afterwards. It’s why we go to horror movies and why we go to haunted attractions.

Natalie (Forsyth) has returned home from school. Her best friend Brooke (Edwards) is happy to see her – Brooke’s roommate Taylor (Taylor-Klaus) not so much. But young Gavin (Attal) really wants to see Natalie after a summer flirtation. So much so that he’s gotten VIP passes to Hell Fest for the three girls as well as the boyfriends of Brooke and Taylor. Hell Fest is one of the biggest haunted attractions here is, a traveling amusement park with horror-themed rides and mazes. It’s a big deal every time it shows up. Brooke and Taylor are very psyched for it; Natalie is less enthusiastic, not being terribly fond of being scared.

The real difference at this particular edition of Hell Fest is that there is an actual psycho among the costumed actors who can dispatch young girls in full view of the patrons – it’s all part of the show, right? – with nobody being the wiser. He’s done it before, as we see in a prologue.

So when a terrified girl who knows that fantasy has crossed the line into reality begs Natalie to save her from The Other (Conroy), as the killer is known as here. Laconically, Natalie tells the masked figure “Do it. That’s why we’re here – to be scared.” And so the killer obliges. And now he has a new target to chase around the park.

I suppose the concept of having an actual killer hiding in plain sight in a haunted amusement park has some merit, although something similar was attempted earlier this year in the independent Blood Fest – which was actually much better than this although as my British friends might say, that film was also daftier. The other main difference is that while that film was obviously made by people who not only believed in what they were doing, they were having a great time doing it. This movie appears to have been approached with all the joy and enthusiasm of a high school student approaching a term paper on Pilgrim’s Progress.

It’s not that Hell Fest is a bad movie; it’s not. It’s just not a good one. It shows little imagination or passion in any aspect, from the writing to the acting to the directing. Only the production design seems to have been approached with any sort of zeal. There are no real sore spots anywhere; neither are there any real bright spots (again, other than the production design).

The characters are literally just cookie cutters without depth and all ready to be ground into crumbs. The inevitable string of murders is neither imaginative nor particularly frightening. They’re just…there, like a misunderstanding in a rom-com. The last thing you want from a horror movie is a feeling of meh. Even a bad horror movie has its merits; there is nobody who itches to see a mediocre scary movie. That’s really what you have here; the horror equivalent of Wonder bread slathered with mayonnaise and American cheese. Horror fans deserve better. Heck, all of us deserve better. Natalie herself said “We’re here to get scared.” It’s a shame the folks who made her film didn’t listen to her.

REASONS TO GO: It’s not really bad in any category.
REASONS TO STAY: It’s not really good in any category either.
FAMILY VALUES: There is a fair amount of violence, some gore, a bit of profanity and some sexual references.
TRIVIAL PURSUIT: Many of the scare characters walking around the park during the beginning of the film are actually employed by the Netherworld haunted attraction in Atlanta, one of the top ten in the country.
CRITICAL MASS: As of 10/30/18: Rotten Tomatoes: 40% positive reviews. Metacritic: 25/100
COMPARISON SHOPPING: Blood Fest
FINAL RATING: 5/10
NEXT: Six Days of Darkness concludes

It is ingrained in us as men that our jobs are simple – to fix things that are broken, and to take care of our family. Our image of ourselves as men takes a hit when we fail at either one of those tasks. However, if someone in our family is taken, how far will we go to get them back?

Keller Dover (Jackman) is a blue collar man living in a Pennsylvania suburban neighborhood. Like most blue collar workers, money is tight but he takes comfort in that he can still afford to take his son Ralph (Minnette) hunting and take pride in his son’s first kill shot. When he gets home from the cold woods with his son, his lovely wife Grace (Bello) and cute-as-a-button young daughter Anna (Gerasimovich) are waiting.

He also has great friends – Franklin Birch (Howard) and his wife Nancy (Davis) who live just a few blocks away. Friends close enough to be virtually family, in fact – they spend Thanksgiving day together. Anna and the Birch’s youngest daughter Joy (Simmons) are thick as thieves and Ralph and the older Birch daughter Eliza (Soul) are pretty tight as well.

Joy and Anna go on a toy run to the Dover house but when they don’t return, concern sets in. When searches around the neighborhood yield no clue of their whereabouts, concern turns to fear. When it is discovered that the two girls were seen playing near a dilapidated RV in which someone was clearly inside, fear turns to panic.

Police Detective Loki (Gyllenhaal) is on the case and he has never not solved a case he’s been given. The RV is spotted near the a service station and Loki finds the driver, young Alex Jones (Dano). He turns out to be mentally challenged and when a search of the RV turns up no evidence that the girls were ever inside it, Alex is released.

But that’s not good enough for the enraged Keller. When he confronts Alex at the police station, he is certain that the young man muttered “They only cried when I left them.” He is certain that Alex knows where the girls are so when the opportunity arises, he kidnaps young Alex from his Aunt Holly’s (Leo) house and takes him to a run-down apartment complex that Keller is renovating and tries to beat the answers out of him.

Grace has essentially fallen apart and is in a drug-induced haze, pretty much unaware of anything but her missing daughter. Franklin and Nancy are fully aware of what Keller is up to but refuse to act; if this is what it takes to get their daughter back, so be it. They won’t stop Keller despite their misgivings about his actions but they won’t aid him either.

In the meantime Detective Loki is getting nowhere despite some promising leads – including a drunken priest (Cariou) with a surprising secret in the church basement and a hooded stalker (Dastmalchian) who may or may not be involved with the kidnapping. In the meantime time is ticking away on the fate of the girls.

Villeneuve has previously directed the excellent Incendies and shows a real flair for the thriller genre. He utilizes cinematographer Roger Deakins – one of the best in the world – to create a grey and colorless environment, growing increasingly more so the longer the girls are away. The children bring color and life; when they are gone there is a growing despair.

Jackman, who was Oscar-nominated for Les Miserables surpasses even that performance here. He is a loving father but one with hints of paranoia even before the kidnappings. He follows a philosophy of being prepared for the worst but nothing could have possibly prepared him for this. As his desperation grows, so does his veneer of civilization begin to crumble. He is so sure that Alex knows something that he is unwilling to even entertain the suggestion that he may be innocent; he knows in his gut that Alex knows where the girls are and he’ll get that information out of him no matter what it takes and folks, it isn’t pretty. Some of the torture scenes are decidedly uncomfortable.

Gyllenhaal has a bit of a cipher on his hands. His Detective Loki is aptly named; not necessarily for the Norse trickster God but for the sound – low key, and the Detective is decidedly that. His people skills aren’t all that well-developed; he answers questions from the distraught parents with the same word-for-word phrase “I hear what you’re saying. We haven’t ruled anything out yet. We’ll certainly look into it” but there is nothing genuine behind it. Loki bears some odd tattoos and is far from perfect; when shadowing Keller whose actions have become suspicious Loki is easily spotted, for example.

The denouement has some unexpected twists to it which is a good thing, although there are some huge holes in logic – for example (SPOILER AHEAD) DNA is not found in a place where it later turns out the girls HAD been; even had it been wiped clean (and it doesn’t appear to have been), there would have been traces. Also, apparently, police cars in Pennsylvania have no sirens or radios.

Still, this is a gripping thriller that will make any parent who sees it twist inwardly as they watch their worst nightmare unfold onscreen. The ensemble cast is uniformly superb and Dano, the lone non-Oscar nominee among them, may well earn one for his work here. While I thought the movie was a bit long at two and a half hours, it still doesn’t feel like any time was wasted. This is one of the better movies to come out in wide release in recent months and is worth seeing just for Jackman’s performance alone.

REASONS TO STAY: Almost too hard to watch in places. A few lapses in logic. Runs a bit long.

FAMILY VALUES:  There’s some extremely disturbing violence with depictions of torture and child endangerment, as well as foul language throughout.

TRIVIAL PURSUIT: The movie has been in development for nearly a decade, with Bryan Singer and Antoine Fuqua (among others) both attached at various times to direct and Mark Wahlberg and Leonardo di Caprio both attached at other times to star. Jackman was attached when Fuqua was set to direct but both dropped out; Jackman came back on board when Villeneuve was brought in to direct.

COMPARISON SHOPPING: Silence of the Lambs