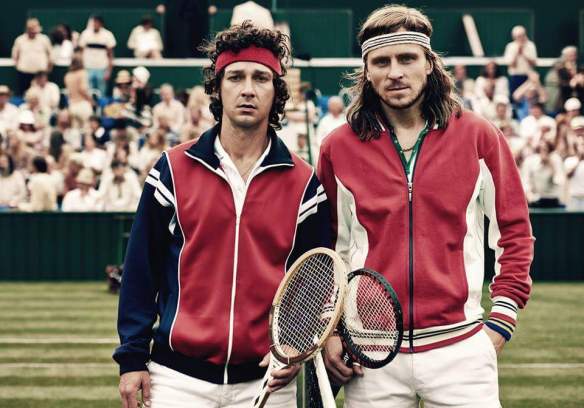 Competition can turn enemies into friends and friends into brothers.

Rivalries are often the most fascinating stories in sports; the Yankees-Red Sox, Ali-Frazier, Seabiscuit-War Admiral, Palmer-Nicklaus. These sorts of stories tend to capture the imagination of the public, whether in the United States or elsewhere; there are always rivalries to fuel the fervor of the sporting public.

In the 80s, one such rivalry occurred in tennis. Bjorn Borg (Gudnason) was the top player in the game. He had won four straight Wimbledon championships and was about to try for an unprecedented fifth. His emotionless demeanor and absolute control earned him nicknames like “Ice Borg” and “The Swedish Machine.”

The polar opposite is John McEnroe (LaBeouf), a temperamental American who argues calls with umpires and often unleashing profanity-laced tirades against officials on the court and off, earning him the current titleholder of the Bad Boy of Tennis like none had achieved before or, to date, since. His game was a charging net game; Borg’s was more geared towards the baseline. They were both great competitors but they had little else in common; McEnroe dug the spotlight whereas Borg was tired of living in the media glare. Borg was cheered by millions; McEnroe was mainly booed. Borg had a stable fiancée (Novotny) while McEnroe played the field. It was truly a rivalry made it heaven.

And yet in many ways the two were not all that different. As a young man (Borg), Bjorn had a great difficulty controlling his anger. That is, until he meets trainer Lennart Bergelin (Skarsgård). He teaches Borg to harness his rage and channel it constructively, to hide his emotions in order to get in the heads of his opponents. Bergelin is the reason Bjorn Borg became Bjorn Borg.

The most prestigious tournament in tennis is Wimbledon and Borg is determined to make history. Standing in his way is McEnroe, who is just as determined to make history of his own. The year is 1980 and the two are on a collision course to play one of the greatest matches in the history of the sport. To this day many believe it is the greatest tennis match ever played.

The story is indeed a compelling one but I wish it would have been handled a little differently. This Swedish-Danish co-production focuses on Borg which would normally be fine but let’s face it – McEnroe is by far the most interesting character. Gudnason bears a striking resemblance to the tennis great and does a superb job channeling him but let’s face it – the man was kind of boring. I understand that Borg remains a revered figure in Scandinavia but I think the movie would have benefited by a little more McEnroe.

Metz utilizes a lot of flashbacks to tell his story and to be honest after awhile they begin to get annoying. The flow of the film becomes choppy and frustrating at times. What’s worse is that the tennis sequences are pretty poorly shot. The angles are all wrong and we don’t get a sense of the ebb and flow of the game. To be fair Metz does a good job of getting the tension up but when the tennis sequences in a tennis movie are sub-par, that’s troubling.

All in all this is a decent enough movie but it could have been better. It could have used a little of the humor displayed in I, Tonya to name one. As it is this is mainly going to appeal to Swedes and older tennis fans for the most part.

REASONS TO GO: The rivalry is a compelling one. Gudnason does a strong job as Borg.
REASONS TO STAY: The flashbacks get to be annoying. The tennis sequences are poorly done.
FAMILY VALUES: There is plenty of profanity and some nudity.
TRIVIAL PURSUIT: The actor who plays Borg as a young boy is Borg’s real life son Leo.
BEYOND THE THEATER: Amazon, Fandango Now, Google Play, iTunes, Microsoft, Vudu
CRITICAL MASS: As of 6/14/18: Rotten Tomatoes: 84% positive reviews: Metacritic: 63/100.
COMPARISON SHOPPING: Battle of the Sexes
FINAL RATING: 6/10
NEXT: Straight Into a Storm