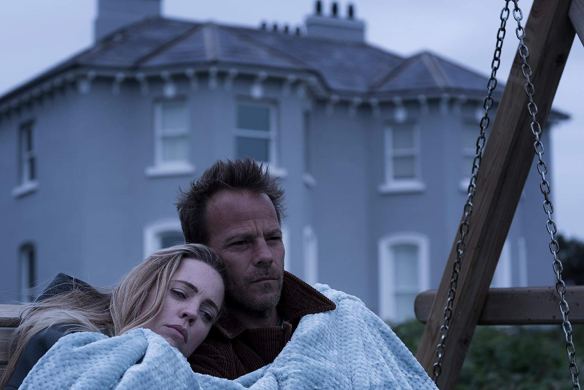 Ireland may not be the best place to go to assuage your grief.

When times are hard the movies tend to reflect that – not necessarily about the things causing those hard times but with films that reflect people going through hard times themselves. Any parent will tell you that the hardest time of all is losing a child; it’s not just the anguish of grief but the recriminations particularly when the death could have been prevented.

Writer Ben Slater (Dorff) and his wife Hazel (George) are going through exactly those circumstances. The two are renovating the family hotel that has been in Hazel’s genealogy for generations, a lovely boutique hotel right on the wild shoreline of Ireland. Ben is teaching at a local Catholic school where he pals around with the irreverent Father Sean (Delaney) who recognizes that Ben is using the booze a little too much, even for Ireland.

Often, Ben passes out on the beach near a rocky outcropping where he has a dream – or perhaps memory – of a family day at the beach not long before Molly (Farrell) fell down the stairs of the hotel and broke her neck. It was one of those lovely family days of building sand castles and two parents delighting in the antics of their daughter. Ben is also getting an odd recurring message: Seas the Day.

He becomes convinced that Molly, for whom spelling was a challenge, is the one behind the messages. He also begins to obsess with the idea that he is actually travelling into the past, particularly when he starts returning to wakefulness with mementos of that day clutched in his hand. In subtle ways he has begun changing things in the past but not enough to bring Molly back. To make matters worse, Hazel’s somewhat fragile and emotional friend Serena (McGinnity) has moved back in with them and she carries a secret that can break apart the already on thin ice couple. Things are definitely not right but what will Ben do to make things right?

Think of this as an Irish ghost story without the ghost. Molly’s presence is all over the place for Hazel and Ben, but she’s no apparition and there are no real scares here. Mostly, this is a mystery of a man desperate to change his circumstances and trying to interpret the clues left to him to do it. Dorff, a dependable performer who unfortunately has been stuck with comparisons to Kiefer Sutherland throughout his career, deserves better. His performance here is strong enough to take notice, although not strong enough to overcome the flaws in the script.

The story moves at an elephantine pace and it feels like it shouldn’t be. There are too many scenes that reconfirm points that have already been made; the script could have used a little more brevity or the film more judicious editing at the very least. At times it becomes too much the soap opera which undercuts the basic melancholy which suffuses the movie throughout. Then again, the grim tone could have used a little more lightness.

Besides Dorff, there are other reasons to see the movie. The picturesque Irish countryside and coast make for lovely backdrops and Ferry Corsten delivers a truly lovely score that enhances the beautiful images we are treated to. Still, this is a movie that just can’t seem to get out of its own way and while it comes together nicely with an ending that ties things together, it is definitely a downer of a movie that is best suited for rainy days and broken hearts.

REASONS TO GO: Both the score and the cinematography are lovely.
REASONS TO STAY: Too much soap opera sabotages what would otherwise be a nifty concept.
FAMILY VALUES: There is sex, profanity and drug use extant.
TRIVIAL PURSUIT:  Dorff will be a key cast member in the next edition of True Detective.
CRITICAL MASS: As of 10/23/18: Rotten Tomatoes: No score yet. Metacritic: No score yet.
COMPARISON SHOPPING: The Time Traveler’s Wife
FINAL RATING: 5.5/10
NEXT: Horn from the Heart: The Paul Butterfield Story 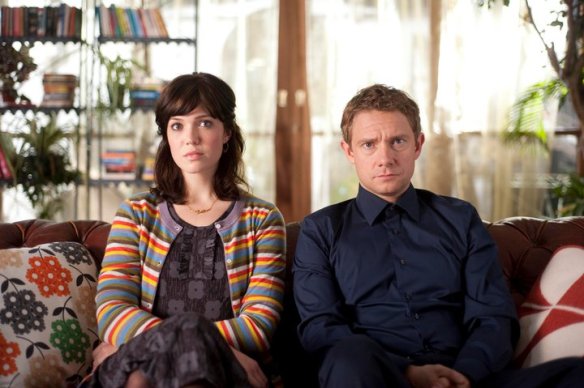 Just a couple of hedonists.

Marriage is not the easiest undertaking. So many different elements go into making it work – financial stability (or at least a reasonable facsimile of same), sexual compatibility, child raising philosophy, shared interests – it’s a wonder that any of them actually work.

Alvin Finkel (Freeman) and his wife Ellie (Moore) have lost that spark. Months go by without any sex at all and when they do have it, there’s a kind of drudgery to it, as if it is some kind of chore. Both of them are wondering if that signals a basic incompatibility or worse yet, that their marriage is crumbling altogether. They decide what they really need is a little bit of spice.

Or perhaps to be more accurate, a whole tractor trailer full of spice. You see, they’re not alone in that predicament – their friends Peter (Silverman) and Janet (George) have been experiencing once the same thing. When some kinky self-pleasuring on the part of Ellie goes terribly, horribly wrong, she decides that the best thing for them would be to involve another couple.

But which couple? It would be too weird to do it with Peter and Janet – like having sex with your siblings. Besides, it’s novelty they seek. Out with the old, in with the new. However, that’s not as easy as it sounds as every couple they interview looking for the right one seems crazier and more unstable than the last. When at last they find a couple that looks like they might work out (Deayton, Beaumont) they make the commitment to take that step – and that’s when the fireworks really begin.

It sounds like the premise for a light and airy sex comedy but that’s not how Newman chose to go. The self-pleasuring incident I referred to earlier was Ellie using a cucumber for self-pleasuring being interrupted unexpectedly by the arrival of her parents who find their baby girl caught red handed as it were – and to make matters worse, the embarrassment causes Ellie to evacuate the cucumber from her vagina with explosive force, sending the veggie missile directly into her daddy’s crotch. Mandy Moore, fire your agent.

The humor here is so heavy-handed and sophomoric that you can only watch the movie slack-jawed, completely flabbergasted that anybody thought these jokes and gags would work. After awhile it becomes kind of a test; surely something funny must occur in this comedy but for my own personal taste in laughs, nothing ever tickled my funny bone. Perhaps you are made of sterner stuff than me.

The movie’s saving grace is Martin Freeman. Before he put on the furry hobbit feet and became one of the most stellar performers of this year’s TV season in Fargo he did this movie and I’ll give him credit it’s as game a performance as you’re likely to see. It’s not enough.

WHY RENT THIS: Martin Freakin’ Freeman.

WHY RENT SOMETHING ELSE: Dreadfully unfunny. Tries to go either to gross or too refined and ends up being neither.

FAMILY VALUES: A goodly amount of sexual content and a fair amount of foul language.

TRIVIAL PURSUIT: Newman based this on a short film, Sex with the Finkels that he had done.

NEXT: The Wicker Tree

There’s nowhere to go but up.

Sometimes when you least expect it you find hidden gems where you ought not to. It might have to do with low expectations – you think that the movie is going to be just one of many that when it turns out that it is not you are so pleased that you perhaps give it an inordinate amount of credit. That’s as may be but the truth is those kinds of movies are the sort you appreciate simply because they leave you pleasantly surprised.

Rob (Newman), Ed (Speelers) and Alison (George) are mountain climbing in the Scottish highlands and having a kick-ass time of it. Sure there are a few hairy moments but nothing these young enthusiasts can’t handle. Afterwards, they meet up with married friends (McGowan, Sweeney) in a remote cabin and….well, do things that young active people do.

High winds the next day preclude their plans for climbing so a hike in the woods is called for instead. It is there that Alison and Ed hear a plaintive voice, crying out in a language they don’t understand. After digging, they find Anna (Boyd), a Serbian girl who can’t speak a word of English, buried in a box underground. They pull her out and determine to send their best climbers – Alison and Rob – on ahead to fetch help.

This is one of those thrillers that doesn’t rely on artifice – or at least a lot of it – to keep its audience on the edge of their seats. This is a smart, beautifully photographed suspense movie that utilizes some beautiful Scottish scenery. There is a real sense of jeopardy that you can’t manufacture without at least a working understanding of the nuances of the situation. Another thing you can’t manufacture is the scenery; there are some breathtaking images here.

Melissa George has developed into a fine actress who is most commonly found in European thrillers and horror flicks. She’s been compared with Jamie Lee Curtis and I think that is pretty apt; she plays smart, strong women who can be a physical presence without losing their feminine side or their sex appeal. Curtis made a career that way and Gina Carano looks to do the same; George already is.

When the movie changes location to a Scottish village it loses a lot of its momentum, as if the filmmakers were more comfortable filming in the wilderness than they were in a more urban environment. That aside, there are some really nice twists and turns, particularly one having to do with the identity of the Really Bad Men that fans of the genre will surely appreciate.

I’m deliberately keeping things fairly vague because the movie works so much better if you don’t see what’s coming. I was fortunate enough to go into seeing this without knowing anything about it and was simply blown away by how sophisticated the movie making was here. You might think from reading the plot summary that this is a very basic “wilderness stalking” movie, but it’s far from that. It’s elevated by some strong performance (particularly from Speelers and George), some gorgeous cinematography and writing that gives its audience credit for having some sophistication and intelligence. While the ending might knock it down a peg or two, this is still a really good gem in the thriller genre.

WHY RENT THIS: A couple of well-put together scenes. Speelers and George are compelling leads. Gorgeous scenery.

WHY RENT SOMETHING ELSE: Final third of the movie doesn’t hold up to first two thirds.

FAMILY VALUES: There is some fairly strong violence and a bit of foul language.

TRIVIAL PURSUIT: Director Gilbey and his brother Will (who co-wrote the script with Julian) became avid mountain climbers while researching and making the film. The footage over the end credits that was taken with helmet cans was actually shot by the brothers themselves while scouting locations for the movie.

BOX OFFICE PERFORMANCE: $25.3M on a $4M production budget; that’s a pretty sizable hit for a movie that’s been pretty much ignored over here.