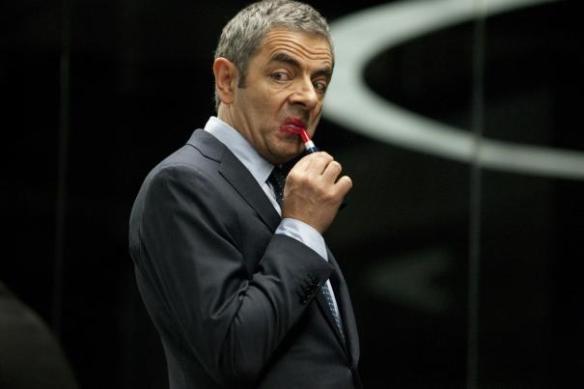 The world needs its superspies. Suave men ridiculously well-dressed who can toss a grenade with one hand while holding a perfectly made cocktail in the other while spouting a witticism as dry as his martini. We need them. Really we do.

That is to say, we need Johnny English (Atkinson) but the urbane spy no longer needs the world. After a disaster in Mozambique which led to a world leader getting assassinated on Johnny’s watch, he has retired to a kung fu monastery where he is undergoing rigorous training to get a Zen-like calm back although what getting kicked in the nuts has to do with Zen I’m not quite sure.

Then he gets word that he is needed at MI-7 (now known as Toshiba British Intelligence in one of the film’s better jokes) and reports to Pegasus (Anderson), the agency’s chief. It appears that another assassination is in the offing and the contact who knows anything about it will speak only to English. Johnny is given a hero-worshipping Agent Tucker (Kaluuya) to assist and is watched like a hawk by psychiatrist, Kate Sumner (Pike) whom he develops a more intimate rapport with.

In the meantime he must contend with supercilious agent Simon Ambrose (West), an octogenarian hit woman with a deadly vacuum cleaner (Lim) and a clever and deadly opponent who always seems to be at least one step (if not more) ahead of English and his colleagues. Plus, it seems, there may be a mole within the agency. Someone evidently forgot to call the exterminator.

I have to admit first off that Rowan Atkinson is a taste I haven’t yet acquired. He has legions of fans for his efforts in “Blackadder,” “Mr. Bean” and in dozens of film appearances over the years but I haven’t ever really found him to be my taste, so take anything negative I say about him with a grain of salt. He is a gifted physical comedian but for whatever reason I’ve always found him to be too lowbrow. He is the equivalent of a fart joke and there are plenty enough of those here.

There are a lot of Bond references here as there must be in any self-respecting spy spoof but at times you get the sense that there isn’t any sort of real imagination here particularly in regards to the story. It seems like something we’ve seen a million times before, not only in Bond but it traditional suspense movies and in other spoofs, like “Get Smart” for example.

This is definitely aimed at youngsters. The humor really is on that level. Parents will get the references; kids will love the toilet humor and pratfalls. It’s really quite inoffensive and has moments that you might chuckle nostalgically at but it got little more out of me. Those who love Atkinson will probably get a lot more out of it than I did. It’s not a bad movie – heaven knows there’s much worse out there – but by the same token it isn’t going to remain in your memory banks for very long.

WHY RENT THIS: Some nifty gadgets and Atkinson, though an acquired taste, never disappoints.

WHY RENT SOMETHING ELSE: The humor is terribly juvenile and the plot stale and predictable.

FAMILY VALUES:  There’s a little bit of rude humor, some cartoonish violence, a few choice bad words and some sexiness.

TRIVIAL PURSUIT: Simon Ambrose is said to have attended Eton College. In reality Dominic West, the actor that portrays him, actually did attend Eton.

BOX OFFICE PERFORMANCE: $160.1M on a $45M production budget; this was a big hit but nearly all of it overseas. Only $8M came from domestic box office which virtually guarantees we’ll see another Johnny English movie but possibly not over here.