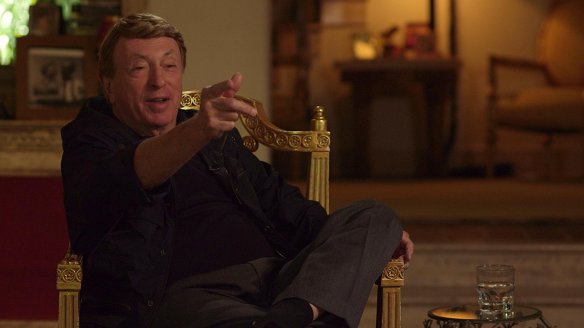 Back in the 1970s, B movies in many ways reached their nadir. Guys like Roger Corman, Joe Dante and Melvin van Peebles were cranking out low-budget (or no-budget) horror flicks, exploitation movies of all manner and of course the Blaxploitation films that changed cinema as we know it. Among the icons of that era was Larry Cohen.

Cohen remains active today in films, a career spanning now six decades (he sold his first screenplay at 17 and will turn 77 this summer). He is credited with creating the Blaxploitation genre with Black Caesar (1973) and wrote and directed three of horror’s most revered films: Q (1982), It’s Alive (1974) and The Stuff (1985).

This clips-and-interview documentary has made the rounds of genre film festivals around the world (and other festivals, including our own Florida Film Festival this past April) and is shortly going to get a brief theatrical run before hitting VOD in August. The list of those giving testimony to Cohen’s lasting influence on moviemaking include such luminaries as Martin Scorsese, Jon Landis, Mick Garris and Dante; actors he worked with including Yaphet Kotto, Eric Roberts, Tara Reid, Traci Lords, Fred Williams, Robert Forster, Barbara Carrera,  Eric Bogosian, Laurene Landon and his close friend Michael Moriarty (who appeared in several of Cohen’s films) also appear.

The best part of the movie is Cohen himself. He’s a natural storyteller and his writing process is often unique. Around his house he has bits and pieces of ideas that he is busy turning into screenplays. H is a prolific writer, starting his career in television as one and working for live TV back in the 50s. He also created such shows as Branded and The Invaders. However, despite being the creator of these shows, the producers and studios generally wielded creative control of his own creations. This frustrated him to the point where he determined to make his own films his own way. Without millions of dollars to back him, he made films guerrilla-style, often shooting without permits in the streets of New York, staging certain stunts and then whisking his cast and crew away before the cops could arrive.

He is generally regarded with much affection even among those who are part of the studio system these days; Scorsese praises him as “the last of the maverick generation.” Cohen wasn’t (and isn’t) afraid to step beyond cultural mores and look closely at the darker side of life. While his films often had female nudity and much gore, his female characters were often much more than the standard victim or damsel in distress that most women in genre films were at the time.

One gets some glimpses of the inner Larry. He talks reverently about the great composer Bernard Herrmann (of the iconic Psycho score) and how they became close until his passing. One can see that his death hit the director hard. Those are the moments that elevate a documentary.

If I have any faults with the documentary it’s that it feels a bit hagiographic. In other words, this is more of a puff piece than a hard-hitting documentary but I suppose it doesn’t really have to be. If Cohen is presented without warts, who am I to complain? The man certainly seems nice enough. There may be those, like myself, who are not overly fond of talking head interviews and there are  a whole lot of them here. I grant you that this movie is really aimed primarily at those who are aware of his filmography and have seen many of these movies already. If you’re not that familiar with his work I’d recommend going to see some of his movies before watching this documentary. I think that would be much more edifying.

REASONS TO GO: A fascinating look at grindhouse cinema and one of its greatest auteurs.
REASONS TO STAY: The movie fawns over its subject a little bit too much.
FAMILY VALUES: There is some nudity in the various film clips from Cohen’s career.
TRIVIAL PURSUIT: Cohen grew up in the Bronx and majored in film at City College of New York, graduating in 1963.
CRITICAL MASS: As of 6/13/18: Rotten Tomatoes: 100% Positive Reviews. Metacritic: No score yet.
COMPARISON SHOPPING: Corman’s World: Exploits of a Hollywood Rebel
FINAL RATING: 6.5/10
NEXT: Borg/McEnroe