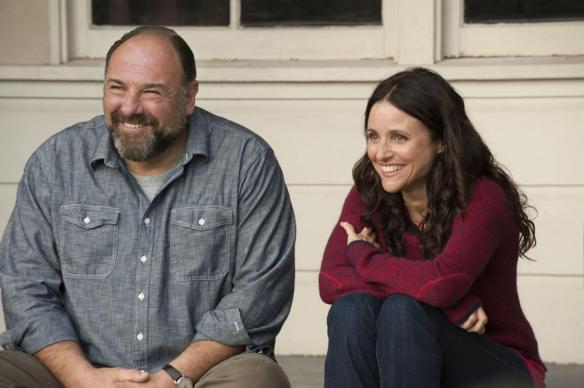 The way Hollywood tells it, the only people who fall in love are young and beautiful. They have the issues of young people, the problems that are part and parcel with just starting out in your life. I guess that actually makes some sense; after all when you’re young you’re supposed to be falling in love.

But that doesn’t mean that the middle aged and the elderly don’t fall in love as well. Into the former category belongs Eva (Louis-Dreyfus) who is an L.A. masseuse who is a divorced mother of one. She lugs her massage table up flights of stairs and dreads the day her daughter Ellen (Fairaway) leaves for college, all the way to New York. Her nest is looking empty indeed.

At a party she meets Albert (Gandolfini), also a single dad who is going through much the same thing she is. At first, he’s not the kind of guy she’d be attracted to normally. He is, as Gilbert Iglesias might put it, a bit fluffy. Still, he has a sweet personality and a good sense of humor. She agrees to go out on a date with him and it goes surprisingly well. Pretty soon they’re doing more than just going out.

At the same party Eva met Marianne (Keener), a poet who she contracted as a client initially. Marianne is in the same boat in many ways as Eva is; a college-age daughter getting ready to leave for the Parsons School of Design. Marianne, like Eva, is divorced but in Marianne’s case she doesn’t have very many pleasant things to say about her ex. He’s a slob, not very good at sex on those occasions Marianne would give in to his whining and give him some. He’s contentious, petulant and neurotic. It doesn’t take too long before Eva figures out that Marianne’s ex is her current beau. However, this is a golden opportunity to find out more about this guy from someone who knows everything there is to know about him so she keeps quiet about her new relationships to both Albert and Marianne. That’s never a good idea.

Holofcener has directed some pretty cool films up to now including Please Give, Friends with Money and Lovely and Amazing. She has a good sense of making her characters realistic and grounded. Sure Eva can be a little bit flighty and sure, Marianne is a bit of a bitch and absolutely Albert is a lazy disorganized slob (by his own admission) but that doesn’t mean they aren’t interesting characters and more importantly – they aren’t defined by their personality quirks as so many other indie characters are. It’s nice to see so well-rounded personalities in a movie.

Louis-Dreyfus, familiar to most from her stint as Elaine on the legendary Seinfeld show, is still a beauty although it is tempered by her age now. Like many women on just either side of 50, there is a fragility to her body that she hasn’t taken the best care of over the years. She also is quick to smile and quick to frown – she doesn’t have the energy to hide her feelings.

Gandolfini in his last leading role (he played supporting roles in two more films that will see release in the coming months) reaffirms what a treasure he was as an actor. He is the center of the film in many ways – the victim of Eva’s mistrust and untruthfulness and it is he whose heart gets broken. While Albert’s weight excess is a central point of the film (he is relentless chided about it by both Marianne and Eva) for me it’s not THE central point.

There are a couple of subplots that seemed unnecessary – the movie really is at its best when it focuses on the relationship between Albert and Eva. I also have to say it is one of those movie that Gene Siskel used to pull his hair over – those conflicts that could be easily resolved by a line of dialogue (“I think your ex is one of my friends”). Then again, I think it’s only human nature to want to find out as much as you can about the person you’re falling for so it isn’t out of the realm of possibility that someone in that situation would see the situation as a golden opportunity rather than as a disaster in the making.

These are damaged human beings. They’ve given the heart to someone only to find it wasn’t the right someone. They’re both lonely and afraid and that’s pretty much how all of us go into relationships. I am fortunate in that I haven’t been divorced but I can imagine how much harder it would be to find love once you’ve been burned by it already.

REASONS TO STAY: One of those situations that could easily be resolved with a sentence or two. Strays dangerously close to formula.

FAMILY VALUES: There are some sexual situations, a bit of bad language, partial nudity and comic violence.

COMPARISON SHOPPING: Year of the Dog

NEXT: The Extra Man