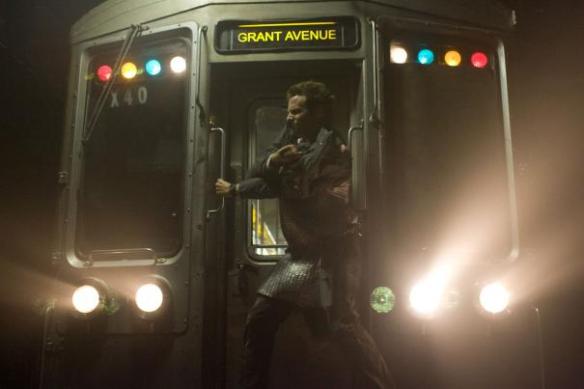 Bradley Cooper demonstrates the wrong way to get on a subway train.

Big cities hide their secrets zealously. The bigger the city, the more difficult it can be to pry those secrets loose. In a city the size of New York City, it can be well-nigh impossible – and quite deadly to those who even try.

Leon (Cooper) is a photographer who specializes in crime scenes and fairly dark subjects. His girlfriend Maya (Bibb) through her friend Jurgis (Bart) gets Leon an audience with well-known art dealer Susan Hoff (Shields). She likes some of his work but needs Leon to go deeper – get at the truth. Go somewhere dangerous.

And what could be more dangerous than the New York subway after midnight? Certainly model Erika Sakaki (NorA) finds this out first-hand when a group of young toughs surround her, threatening to sexually assault her. Only the timely intervention of Leon pointing out that their whole tete-a-tete is being caught on security camera saves her. She shows her gratitude by allowing him to take a few pictures of her, then plants a kiss on him before getting on her train and heading off into the night.

Except that she never gets off that train. Leon finds out a few days later that she has turned up missing and Leon realizes he may well have been the last person to see her alive. He takes his pictures to the police who are indifferent, so he decides to investigate on his own. While checking out the subway station he sees a hulking, well-dressed man who appeared in his last photo of the missing girl – he was on board the same train as she was when she disappeared. Figuring this can’t be a coincidence, he begins to follow the man.

The man, who we later find out is known as Mahogany (Jones), shows up at a butcher’s shop. He is apparently mute (until the very end of the film when he speaks the only three words of dialogue he has in the movie) and imposing. However, Leon proves to be an inept investigator in one sense; Mahogany soon realizes he’s being stalked. However, Leon does manage to discover that Mahogany is brutally murdering people on the late night trains with a misshapen butcher’s hammer, and then hanging them on portable meat hooks while the subway train goes off on a silent siding.

Now the cat and mouse game gets deadly as both Maya and Jurgis get sucked into Leon’s obsession. Still, there’s an even more terrible secret lurking on that forgotten side track; one which only one of them will walk away from.

This is based on a short story by horror master Clive Barker – in fact it is the very first story in the first volume of his 8-book Books of Blood series. The movie version was announced with great fanfare in 2007 and 2008 as horror fans anticipated what the trailers promised was a taut, mesmerizing gorefest. However, a regime change at Lionsgate saw the film thrown into a series of delaying actions before finally getting about 100 screens, all in dollar theaters rather than in first-run houses before moving quickly to home video.

Horror fans (and Barker) howled in protest at the mistreatment of the film. They have a pretty good case – as horror movies go, this is better than average. It is far from perfect – for one thing, this would have made a pretty good hour-long short on some cable anthology series but the overall story doesn’t really support a full-length feature. It feels sometimes stretched out a bit too thin, particularly the portions where Maya and Jurgis are doing their own investigating.

In addition, Cooper who would find stardom with The Hangover just a year later, was miscast here. He is stiff and somewhat flat; I don’t get the sense that he ever really got a handle on the part. My take is that while Kitamura speaks pretty good English, he might not have necessarily been able to communicate what he wanted precisely to Cooper but that’s just conjecture. It does bring the film down a notch.

Some of the kills use obvious CGI for the blood and gore. Remember the good old days when all that was done with practical effects, make-up and puppets? Some of the CGI gore looks it and when you notice it, it takes you  right out of the environment of the film and it’s much like being awakened from a dream by someone throwing a bucket full of cold water into your face.

That said, there is plenty to like about the film as well. Kitamura is a more than capable director. He takes Barker’s story and translates it beautifully to the screen, combining elements of his own background in J-horror along with Dario Argento-esque Italian horror and throws in Big Apple ‘tude on top of it all, from the haughty snobbery of Shield’s West Village art cognoscenti, the indifference of the cops and media to a series of disappearances going on right under their noses and the cocksure tough guys haunting the streets and subways after dark. It’s a heady mix.

So yes this is flawed but overall there’s much more right with it than not. For one thing, Jones makes an intimidating villain, such a presence here that you wonder if he hasn’t been underutilized in his other films. Bibb, who like Cooper has mostly done comedies to this point, makes a fine scream queen and gets her sexy on in a couple of scenes here. This was one that the studio messed up on – it deserved more than a token contractual obligation release and might have made a good deal more coin than it did had the new regime shown a little more faith in the product but sadly, it seems like the Lionsgate brass has turned their back on the horror genre that essentially built the studio (the Saw and Tyler Perry franchises the twin pedestals that the studio was built on) which makes it all the more ironic that they had gotten into such financial difficulties that they had to merge with Summit earlier this year. Sometimes poetic justice just…happens.

WHY RENT THIS: Combines J-horror with giallo and meets it in the middle with a New York attitude. Jones is at his brooding best.

WHY RENT SOMETHING ELSE: Cooper is unconvincing as the horror hero. Over-reliance on CGI gore does occasionally jolt one violently out of the mood.

FAMILY VALUES:  There is violence and gore, quite a bit in fact; nudity (most of it grisly), some sex and of course plenty of bad language.

BOX OFFICE PERFORMANCE: $3.5M on an unreported production budget; the movie might have made money but then again it might not have.