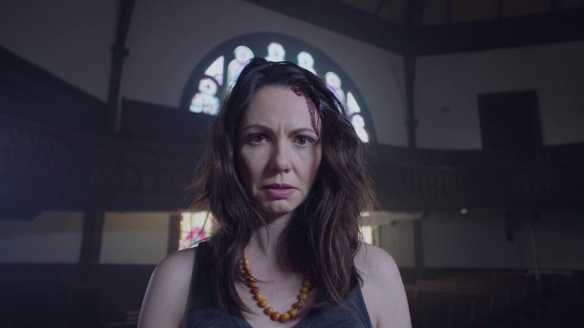 Making movies is nothing like Andy Hardy exclaiming “Let’s put on a show!” It’s a frustrating and often cutthroat process that rarely has anything to do with art and has everything to do with how much crap you’re willing to put up with in order to get your film made. You have to be a little crazy to want to break into the business.

But that’s just what Nilah Williams (Payne) wants to do. She’s come to California from Georgia to make it as a screenwriter but she hasn’t been able to get a foot in the door just yet. It’s not for a lack of trying, though but her persistence hasn’t paid off. By chance she literally bumps in to indie film darling Claire Adams (Sklar) who is something of an idol for young Nilah and the young wanna-be asks her if she would be willing to mentor her. Claire has no time for such nonsense but after Nilah literally pulls her out of the way of a speeding car and saves her life, Claire feels obligated to give her the benefit of her experience.

Claire is brutally honest about Nilah’s script, which was written using a manual. This doesn’t make Claire happy; no great movie, exclaims Claire, was ever written using a manual. To be different, to create something meaningful, you have to go beyond the book. Before Claire can give her much more than that, the two are kidnapped by a group of people wearing bird masks.

The kidnappers are apparently well-versed in cinema, and have an axe to grind with Claire concerning her behavior towards the writer of her latest film, in which all the dialogue was in German. They force Claire to get a loan from her mother (Rodgers) to help finance a film of their own, which their leader, Mr. Owl (Bash) is constantly on the phone with a big boss about. Escape seems unlikely and as the gang begins to self-destruct, it’s not at all certain this movie is going to have a happy ending for Nilah or Claire.

The film is delightfully off-kilter and Solis, who also wrote and co-produced the movie, has written some pretty impressive dialogue. Sadly, not all of the actors are up to making it sound natural. Some of the actors are on the stiff side and their timing in reciting their lines is just a little off. The exception is Sklar, a veteran stage actress, who gives the most emotive performance and tends to be the one you’ll remember most here, although Payne shows some promise as well. Most of the acting, though, is of film school project level.

Oddly, the movie actually gets better in terms of cohesiveness in the second half, as if the actors are getting used to working with each other and the interplay between them gets better and more honest. The best moments in the film are in the last 20 minutes, so if you’re willing to hang in there for a bit, you might find yourself rewarded.

There’s a satirical element to the film that for the most part I liked, although there is an awful lot of name-dropping which cinephiles might get a kick out of (Werner Herzog should get royalties). The various characters are a little bit arrogant about their art, and while I don’t think that’s true of filmmakers in general these days, I have known a few who are on the pretentious side. Still, I think it’s telling that the movie which is ostensibly about the film business with Claire on her way to take a meeting and Nilah attending a conference of producers and directors, was actually filmed in Oakland and Benicia, not noted as filmmaking hotbeds. That might be because Solis lives in the area and didn’t want to go to the expense of filming in L.A. or it might be a sly wink for those in the know. I would like to believe it’s the latter.

This isn’t for everyone and it does get kind of weird in places. However, I found that I liked it a lot more the day after I saw it than I did while I was watching it, which is an encouraging sign. Processing everything you see here may take some time to catch up. It’s newly available on Amazon so you might want to check this out if you’re up for something a little bit left field. We all need a little bizarre once in a while, no?

REASONS TO SEE: There’s a lot of attention to detail here.
REASONS TO AVOID: A little too much cinephile name-dropping.
FAMILY VALUES: There is some violence and a fair amount of profanity.
TRIVIAL PURSUIT: This is Solis’ first narrative feature film; he has a narrative short (The Beat Down, 2013) and a documentary feature (The Games of These Divers, 2006) previously to his credit.
BEYOND THE THEATERS: Amazon, Tubi
CRITICAL MASS: As of 5/13/20: Rotten Tomatoes: No score yet, Metacritic: No score yet
COMPARISON SHOPPING: The Player
FINAL RATING: 5.5/10
NEXT: Fairytale